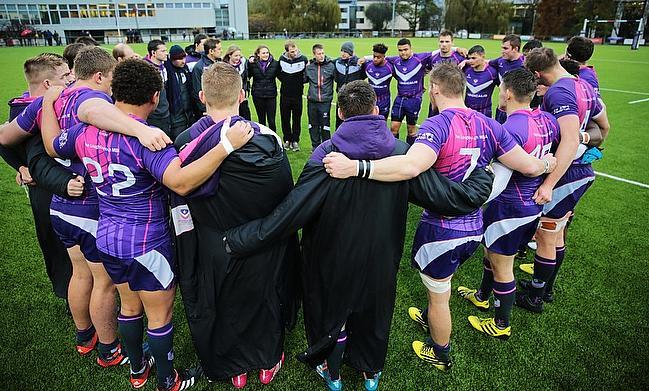 Hartpury College missed out on the chance to extend their advantage at the top of BUCS Super Rugby table after a dramatic defeat against Loughborough.

A win would have put College 11 points clear at the summit of this division, but Loughborough are now only two points behind the league leaders after their narrow win.

Last season’s champions Exeter continue to steadily go about their business as they secured their ninth win a row while Durham maintained their top four place with a hard-fought win over Northumbria. The pressure is still on Durham though, as Bath claimed victory over Cardiff Met as Aaron James’ side aim to break into the play-off places.

Elsewhere across BUCS this week, Bristol, Edinburgh, Manchester Met and Sheffield Hallam are all top of their respective league while in the Women’s competition Edinburgh, Durham and Gloucestershire all claimed emphatic wins.

Hartpury College missed a stoppage-time conversion as Loughborough sealed victory in dramatic fashion over the league leaders at Epinal Way.

Tries from Will Kaye and Harry Nutall helped last season’s runners-up into a 15-3 half-time advantage.

However, converted scores – one from Henry Harper – saw College level the game up with 14 minutes remaining.

That 15-15 scoreline didn’t last long as immediately from the restart, Loughborough crossed for their second try of the afternoon to give them a seven point lead.

Hartpury responded with waves of pressure which Loughborough were repelling, but in the final play of the game, College dived over to have the chance to salvage a draw. However, the resulting conversion sailed wide and Loughborough clinched the win.

Leeds Becket led early on thanks to a try as well as a penalty from David Mcilwaine.

But scores from Ned Warne and Lawday put the hosts 17-8 ahead at the break.

Mcilwaine reduced Exeter’s lead with two penalties after the interval, but a second for Lawday and a score from Rauf Briler was enough to secure the bonus-point win for Keith Fleming’s men who are now third in the table and just six points behind Hartpury College.

Durham completed the season’s BUCS Super Rugby double over near neighbours Northumbria in a compelling battle at Durham City RFC.

The hosts found themselves 10-5 down at half-time thanks to a try as well as penalty from Will Muir.

Durham hit back after the break as Tristan Rawcliffe touched down to give the home side a two point lead before they landed a penalty to give themselves some breathing space.

Northumbria battled hard to get back into this contest, but Durham held on to claim the points which keeps them in the top four.

Bath secured victory in their last home match of the season as an excellent first-half performance helped them overcome Cardiff Met.

The home side held an 18-8 lead at the break, with tries coming from Tom Doughty and Jake Allen after Cardiff Met captain Aled Evans was sin-binned.

After half-time, Austin Hay increased Bath’s lead before Cardiff Met rallied to try and get themselves back into this encounter.

Bath were then forced into some superb defending and despite being down to 13-men at one stage during the second period, they managed to restrict their Welsh opponents to just a Penalty Try.

Head of Rugby Aaron James told Team Bath’s website: “We’re going to have a crack at fourth. We’ve actually won more away than we have at home so we’re actually looking forward to our away matches to come!

“We needed this win. We defended really well and at times we attacked well. We created some chances that we should have finished off and we’re a little disappointed not to get the bonus point but that was our fault.

“It was a really good team effort; when we were down to 13 we all bound together and so we’re really pleased to get the win.”

In North A, league leaders Nottingham Trent weren’t in action this week which allowed the teams below to make up some ground on the current table toppers. Leeds jumped into second place and are now seven points behind Trent after they beat the University of Nottingham 15-13.

Nottingham also dropped down to fourth in table after this defeat as Durham 2nds beat Bishop Burton 34-26 to clinch their fourth win on the spin and move into the top three. Elsewhere, Loughborough 2nds were handed a walkover victory against Newcastle.

Top of the table Bristol returned to BUCS duty in South A this week and did so in style as they thrashed UWE 55-7 to stay one point clear at the summit. That was their eighth win of the season, but second placed Hartpury College 2nds are doing all they can to stay with league leaders.

They racked up their second win on the spin thanks to a 61-12 victory over King’s College London who have lost all 10 of their matches so far this term. Elsewhere, Swansea returned to winning ways with a comfortable 36-10 win over USW while Exeter 2nds v Cardiff was postponed.

In North B, league leaders Edinburgh bounced back from their first defeat of the season as they edged out Strathclyde 22-17 which now leaves them with a six point advantage at the top of this division. Third placed Durham failed to capitalise on St Andrews not being in action as they lost to 34-17 to Manchester which was the north-west sides second win of the campaign. The other fixture in this division yesterday saw Loughborough 3rds despatch winless Worcester 65-5 to secure their third win of the campaign.

In South B, Exeter 3rds extended their lead at the top of the division as they beat Cardiff Met 2nds 60-10. The Green and Whites now have a seven point lead over Bath 2nds who were once again not in action this week. Elsewhere in the division, St Mary’s moved up to fourth in the table following their 20-13 win over Southampton while Portsmouth picked up their second win on the spin as they beat Bristol 2nds 20-7.

Northern 1A was back after the winter break, but there wasn’t a full round of games. League leaders Leeds Beckett were awarded a walkover win against Newcastle 2nds, but there there wins for Sheffield and Durham 4ths. Sheffield continue to hunt down Leeds Beckett as they beat Hull 47-7 to extend then winning run to five matches while Durham 4ths stay third after a hard-fought 13-10 win over Lancaster who remain winless after promotion last year.

In Northern 2A, Manchester Met have moved to the top of the table as they beat Keele 55-7. Man Met are five points clear of second placed Liverpool, but the Merseyside club have two games in hand. In the only other fixture in Northern 2A this week, Bangor picked up their first win of the season as they beat UCLAN 22-17 in Lancashire.

Northern 2B had a full fixture taking place this week and Sheffield Hallam remain top of the table following a 23-0 win over Leeds Beckett. Hallam have now won six of their last seven matches and their lead at the summit is now eight points.  Elsewhere, York secured their second win of the season as they beat Northumbria 2nds 17-5 while Leeds 2nds were handed a walkover win against Newcastle 3rds.

In Midlands 1A, there was only one fixture this week as Leicester were awarded a walkover victory over fifth placed Harper Adams. As for Midlands 2A, league leaders Coventry had their fixture with Nottingham Trent 3rds postponed, but Nottingham 4ths took full advantage as they moved two points behind Cov thanks to a 12-6 win over Harper Adams 2nds which keeps Notts unbeaten this season. Elsewhere, Warwick 2nds beat Birmingham 3rds 28-12.

Into the Women’s competition where Premier North returned after the Christmas break and league leaders Edinburgh thrashed Newcastle 70-0 to move five points clear at the top while Durham have moved into second after they beat Loughborough  37-7. In Premier South, there was only one fixture this week as Gloucestershire beat Bristol 47-0 to move into third place.