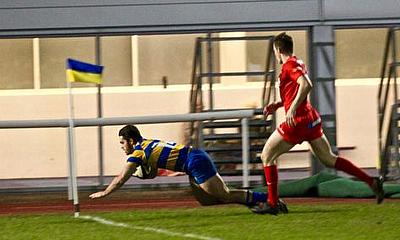 A superb first-half performance was enough for Hartpury College to maintain their stay at the top of the BUCS Super Rugby table following a hard-fought win over Bath.

Bath launched a comeback in the second period, but just fell short of inflicting only a second defeat of the season on the league leaders.

Second placed Loughborough put in a superb second-half performance to see off Cardiff while it was another excellent second 40 which agave Exeter a sixth in a row as they beat Durham.

The final fixture in BUCS Super Rugby this week saw 14-man Northumbria battle to victory against Leeds Beckett with the Yorkshire side still searching for their first win of the season.

Elsewhere in BUCS, Nottingham Trent Men's and Cardiff Met Women stay top of their respective divisions while Durham's Men's 3rds became the first side to beat Edinburgh in the North B division.

Bath had actually opened the scoring through Darren Atkins, but they fell further behind in this contest at the start of the second-half as Jamie Cook crossed for Hartpury’s fifth try.

However, the away side continued to battle on hard and mustered up two quick fire tries scored by Craig Duncan and and Dan Rowland which seemed to stun College who knew they needed to refocus and regroup.

Bath kept on pressing and earnt themselves a bonus point five minutes from the end following a catch and drive which was touched down by Tom Doughty but the hosts were able to hold out for their 10th victory of the season and maintain their unbeaten home record.

Hartpuy Captain Seb Negri: “We played 35 minutes of really good quality rugby and it was pleasing to see such a positive response to the training that we have done this week.”

“There’s still lots to work on.  In the second half there was a lack of concentration and that gives a team like Bath, who are very physical, a way back into the game.  Overall though, we’ve got to be pleased with the win and the bonus point.”

A strong second-half performance from Loughborough Students helped them on their way to a bonus-point win over Cardiff Met in Wales.

Luke Northmore’s early Cardiff score and Henry Wheadon’s try for Loughborough saw the sides level at 7-7 in this contest.

George Simpson then slotted over a penalty for the home side before Loughborough captain Joe Doyle grabbed his sides’ second try of the day to nudge his team in front. Cardiff hit back again with a Simpson penalty to go 13-12 ahead, but three points from Will Kaye gave Loughborough the edge at the break.

Simpson continued his accuracy with the boot to give Cardiff the lead once again just after half-time, but that was as good as it got for the home side. Kaye along with Callum Watson and Chris Davies all crossed for Loughborough who dominated the hosts in the second period.

Loughborough remain second in this division after their third straight win while Cardiff Met stay sixth.

Cardiff Met Head Coach Danny Milton:  “A tremendous game for the neutral. Sadly, we were the home side and came away with very little. All credit and plaudits must go to Loughborough who showed their worth with a fine second-half display. I thought we showed some good touches at times but didn't sustain any real pressure.

Current BUCS champions Exeter extended their winning run to six matches after an impressive second-half display against Durham in the north-east.

Durham led this encounter 17-14 at the break thanks to tries from Nathan Opedo and Sam Moncur, with Callum Young and Tom Lawday replying for the Green and Whites.

But the visitors blitzed Durham in the second half as a Penalty Try along with scores from Elliot Roofe, Fred Wheadon and Thomas Rhodes as well as some expert kicking from Ted Landry secured Exeter another victory leaves the third placed side 10 points off top spot with a game in hand.

Northumbria survived a spirited Leeds Beckett comeback and a red-card shown to George Wacokecoke to clinch their third win of the season.

David Mcilwaine’s converted try had given Beckett the advantage following Wacokecoke’s early three points, but Northumbria carried a 17-7 lead into the second half thanks to Edward Bloodworth and Will Muir.

Beckett got the first points on the board after the break through the boot of Mcilwane and momentum soon shifted in their favour when Wacokecoke was shown a second yellow card resulting in him being dismissed just after the hour.

The hosts had to wait until the 71st minute to get themselves firmly back into this contest as Mcilwane grabbed his second try of the evening to move Beckett to within two points of their visitors.

However, Northumbria were able to hold out and sealed the game when Muir landed a late penalty to move the north-east side 11 points clear of Beckett who remain winless this term.

Leeds Beckett University Director of Rugby Union Colin Stephens: “I thought the game was well-contested throughout and I’m sure very exciting for the spectators.

“Northumbria showed a greater enthusiasm at times and composure that was needed to win the game, however we had possibly the greater chances and failed to capitalise on Northumbria infringements.

“Defences were sound from both teams and only minor lapses let in scores for both teams.

In North A, league leaders Nottingham Trent remain top of this division as they began 2017 with a vital 56-12 win over city rivals Nottingham. Trent now have an eight point gap at the top of the table as second placed Newcastle beat Birmingham 38-14.

Leeds made it two wins from two at the start of the New Year as they moved up to third in the table following a 39-18 victory over Bishops Burton College while elsewhere, Durham 2nds came from 23-13 down to beat Loughborough 2nds 25-23 to secure their fifth win of the season.

With league leaders the University of Bristol not in action in South A, second place Hartpury College 2nds had the chance to close the gap to two points at the top and they did just that with a 36-23 away win against the University of South Wales.  In the other fixture in this division, Exeter 2nds responded from their defeat at the end of last year against Bristol, by beating UWE.

In North B, league leaders Edinburgh suffered their first loss of the season as their 100 per cent record was ended by Durham 3rds. The north-east side won 19-7 to clinch their sixth win of the season and they are now just four points behind Edinburgh. Second placed St Andrews capitalised on Edinburgh’s misfortune and did so in some style as they thrashed winless Worcester 78-0 to move within a point of their Scottish rivals. Elsewhere, Strathclyde beat Loughborough 3rds 26-14 to secure their third win in four matches.

In South B, Exeter 3rds have moved to the top of the division following a victory over Bristol 2nds. The Green and Whites have leapfrogged Bath 2nds who weren’t in action this week. The only other fixture played in this final round of action in January saw Portsmouth pick up their first win of the campaign as they edged out St Mary’s 23-21.

Northern 2B provided us with one fixture this week and Sheffield Hallam moved back to the top of the division following a 26-19 win over York. Hallam have now won five of their six matches and still have a game in hand over second placed Leeds Beckett 3rds while York stay fifth.

In Midlands 1A this week, there was also only one fixture as Warwick thrashed bottom of the table Bedford 63-7 to clinch their fourth win of the season while Bedford remain without a victory in this campaign.  As for Midlands 2A, Birmingham 3rds have moved level on points with second placed Nottingham 4ths after a 28-17 win over Nottingham Trent 3rds.

Into the Women’s competition where there was a full programme of fixtures in Premier South A. Table toppers Cardiff Met secured their ninth straight win of the season as they thrashed Bristol 77-0 which leaves them six points clear at the summit. Second placed Exeter also did their job in empathic style as they waltzed to a 90-7 win over Varsity winners Oxford while Gloucestershire put in a superb performance to beat Cambridge 46-5.