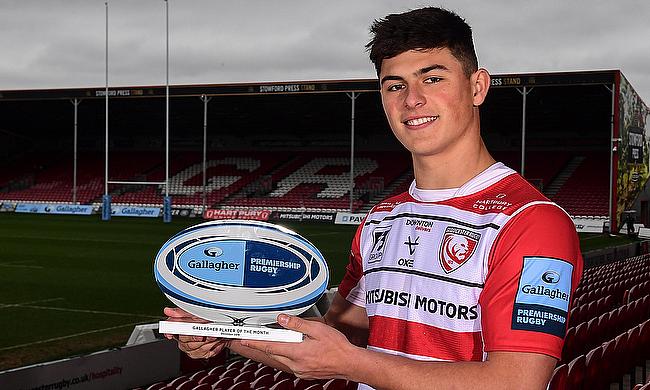 The flying teenager made a major breakthrough in the month of December, scoring five tries, which included a new record when he became the youngest player to score a hat-trick in a Premiership Rugby match.

Rees-Zammit’s performances in December were praised by Ugo Monye, the former England and Lions wing who is now a BT Sport pundit, covering Gallagher Premiership Rugby, and Gallagher brand ambassador.

Monye said: “It’s been an unbelievable month for Louis. Normally the competition is pretty tight when it comes to Gallagher Premiership Rugby Player of the Month but he was head and shoulders above any other player in December.

"The month we’ve had in terms of rugby and the competition has been exhilarating but his performances have just been incredible especially considering this is his first year in the Premiership.

"In a league which is so tight, and where defences are often on top, you’re looking for a spark and he has been that. He’s turning the momentum in matches with his try-scoring ability, his searing pace is something that stands out, but he’s got really nice deft touches as well."

Rees-Zammit was presented with his award by Antony Carlile, account director for Gallagher in Gloucester, where the local insurance broker has a 40-strong team as part of a UK-wide network of more than 70 branches.

Monye added: “You often look to your senior players for those contributions to change momentum but Louis is doing it at 18. It’s a winger’s job to score tries and he’s clearly doing that but to change the course of a match, that takes something really special, and he’s quite clearly got a very special talent.

"You see a lot of quick wingers that score tries, but you wonder if they’ve got an all-round game and an understanding of the game, but that’s something that he’s grasped in a very short period of time.

"For every supporter, not just Gloucester Rugby supporters, they get excited about watching him play, he’s an absolute pleasure and joy to watch.

"If he has the hunger to learn, and speaking to Gloucester Rugby players he’s a very coachable player, there’s no reason as to why his development won’t continue in a similar trajectory to what it is currently.

"He already looks ready-made at the age of 18 and I think he is showing all the hallmarks of what could be a promising career, not just at Gallagher Premiership Rugby level but potentially at international as well."

Gallagher’s Antony Carlile said: “With a lifelong involvement in the game and as a Gloucester Rugby supporter, it’s an absolute pleasure to present the Player of the Month award to the record-setting Louis Rees-Zammit. To be making such a huge impact in his first year in the competition is incredible and his stunning hat-trick in December was something to behold.

“As a locally based business, we’re really enjoying seeing Gloucester Rugby sit so high in the table and Louis’ fantastic pace and try-scoring hunger is already proving a major contributor to the team’s success.”

Rees-Zammit – as part of his prize for being named Gallagher Premiership Rugby Player of the Month – wins a Gloucester Rugby shirt signed by the whole squad and framed by Gallagher which he has donated to the Velindre Cancer Centre.

Since it became the proud title partner of Premiership Rugby in 2018, local insurance broker Gallagher has embarked on a series of community initiatives that champion the positive contribution of grassroots rugby — the lifeblood of the professional and elite game — as part of its ongoing commitment to supporting the wider rugby community and its values.
Rees-Zammit was judged by a panel of experts as the player who made the biggest impact in Gallagher Premiership Rugby over the month of December 2019.

He was involved in a three-way battle to win the award eventually beating brothers Joe and Sam Simmonds who’d enjoyed stunning months for the Exeter Chiefs.

“The plan was to put him in a black jersey..I think that's gone now!”