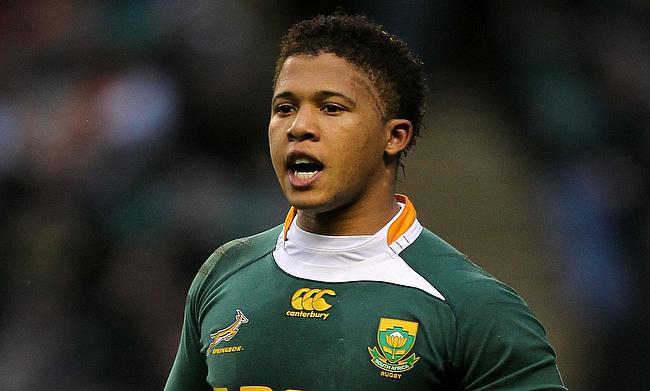 Elton Jantjies emerged on the winning side
©PA

Lions have kept their hope of winning their maiden Super Rugby title alive as they completed a 44-26 victory over Waratahs at Emirates Airlines Park to set up the final with Crusaders.

The game on 3rd August will also be a repeat of last season's final when Crusaders and Lions locked horns with each other with the New Zealand side emerging victorious with a 25-17 margin while this will also be the third consecutive time the Johannesburg outfit are reaching the final of the tournament.

Waratahs had a terrific start to the game with flanker Ned Hanigan and fullback Israel Folau crossing over in the fourth and eighth minute respectively and Bernard Foley slotted both the conversions to make it 0-14.

The response from Lions came in the 21st minute when Kwagga Smith strolled past the post in the 21st minute. Elton Jantjies missed out on the conversion on the first occasion but ensured he slotted the extras on the next two occasions when winger Aphiwe Dyantyi and hooker Malcolm Marx touched down in the 26th and 35th minute respectively as the home side had a 19-14 lead.

Just as the half time was approaching, Waratahs managed to level the scores with a 39th minute try from Tom Robertson but with Foley missing the conversion the scores were levelled 19-19.

The teams struggled to get a breakthrough at the start of the second half before Jantjies kicked a 55th-minute penalty goal to take the score to 22-19 and a minute later Waratahs suffered a setback when Damien Fitzpatrick was sin-binned for off-side and Lions made full use of the numerical advantage with Marx and Smith scoring their second try.

A 74th minute penalty goal from Jantjies meant Lions had a 37-19 lead that remained intact for the rest of the game with Jake Gordon and Courtnall Skosan trading tries as the hosts completed a 44-26 victory.

HIGHLIGHTS: 2018 Super Rugby Semi-Finals: Lions v Waratahs
The @LionsRugbyCo bounce back from 14-0 down against the @NSWWaratahs to get the 44-26 victory and go on to face the @crusadersrugby in the Super Rugby finals. #SuperRugby #FinalsFooty #LIOvWAR pic.twitter.com/5uWMriWzj7