Steve Borthwick: "Reacting under pressure is something you learn" 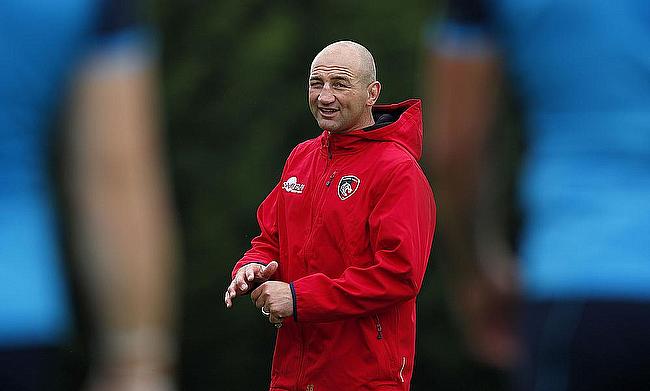 With five red cards brandished across Round 10 in the Gallagher Premiership, three of those were seen in the East Midlands.

As Leicester took on Wasps at the Mattioli Woods Welford Road, it was Tigers who were reduced to 14-men first. This came following Jasper Wiese’s collision with flanker Ben Morris, however undeterred by the setback, the hosts continued to outperform their opponents.

This was thanks to Richard Wigglesworth and Zack Henry's excellent kicking, which pinned Wasps deep into their own half making it virtually impossible for the visitors to get on the front foot.

Just after the break, Wasps’ Kieran Brookes was given his marching orders by Craig Maxwell-Keys for raising his arm in contact, but Leicester continued to keep the away side at bay as they secured the win.

The Tigers' overall feeling was one of satisfaction, with the team still developing under the new coaching group that arrived at the club last summer.

It is very much the same for head coach Steve Borthwick, who was quick to praise his players on Tuesday afternoon after he was asked if the 27-8 victory was symptomatic of the identity he was trying to build.

“We are trying to grow the team, we have got a lot to do in that regard,” Borthwick told TRU. “We are bringing guys together that have only played a handful of games, so how you react under pressure is something you learn.

“I am sure that you with your work colleagues or whoever it might be will understand how they react under pressure if you have worked with them for a long time. It is the same with rugby players.

“You have got to understand how people react and what messaging, and how you communicate with them and that is what we are learning on an ongoing basis.”

In the 78th minute, Leicester were reduced to 13 men after back-row Hanro Liebenberg was sent to the stands for tackling the jumper, however by this point, the game was largely over and no points were scored by either side after the event.

Continuing his run at fly-half due to George Ford being on England duty, Zack Henry was a standout performer for the Tigers on Saturday.

Having played regularly in the East Midlands after spending three years in ProD2 in France, Henry said the early red card to Wiese had very little influence on him for the remainder of the game.

“For me, nothing changes,” Henry said. “I can only control what I can control so as a 10, you have got to react to what has happened and rally the troops.

“I think the boys were absolutely phenomenal in being like; ‘right that has happened, nothing can change it, but what we can control is how we go and attack the end of this first half and then the second half.' I think the boys adapted really well, so I don’t think much changed, we just said; ‘let’s just stick to our plan’ and obviously it paid off.”

Currently sitting eighth in the Premiership table, six points from the play-offs, Leicester’s attentions have now turned to table-toppers Bristol Bears. Pat Lam’s team drew 34-all against London Irish on Sunday and will be without fly-half Sam Bedlow who was banned for three weeks after he was cited for a tip tackle on the Exiles’ Theo Brophy-Clews early on in the fixture.

Bristol did run riot in Brentford with rugby league convert Ratu Naulago (197) and the mercurial Charles Piutau (170) topping the meters made table for the last round of Premiership action.

It is this attitude and self-confidence that has helped the Bears climb the league standings, their all-star backline sending the pulse racing every time they step out onto the field.

However, whilst the likes of Semi Radradra, Luke Morahan and Ioan Lloyd regularly take the headlines, Leicester prop Joe Heyes was quick to point out that their pack is a more than worthy challenge too.

“The way Bristol play, it’s very Southern Hemisphere, it’s very different,” Heyes said. “It is Pat Lam’s ideology of how rugby should be played. It is quite a loose game. They always wait for the opposition to get tired or slip up or switch off, but that is not just how they are playing.

“I think they have realised that they need a good pack to compete, and they have a good pack, which does compete. That’s why they are top of the table, so they are a really good mix, and they are a pretty solid team, so we are excited to give it a good go.”

Heyes is one of a number of young Tigers at Mattioli Woods Welford Road who are very much part of the club’s future. Still only 21, he has made over 50 appearances for Leicester and has been a part of numerous England squads in recent months.

More recently, 19-year-old George Martin has been called into the Eddie Jones' plans, the versatile forward getting the opportunity to test himself against the likes of Courtney Lawes and Maro Itoje as a result of Jack Willis’ significant knee injury.

After finishing 11th in the Premiership last season, it has been no secret that Steve Borthwick is overseeing a rebuild at one of England’s most historic clubs.

With recent form having been patchy, it can only be hoped that their latest win against a Wasps team that reached the Premiership final last season can be the catalyst for Leicester.