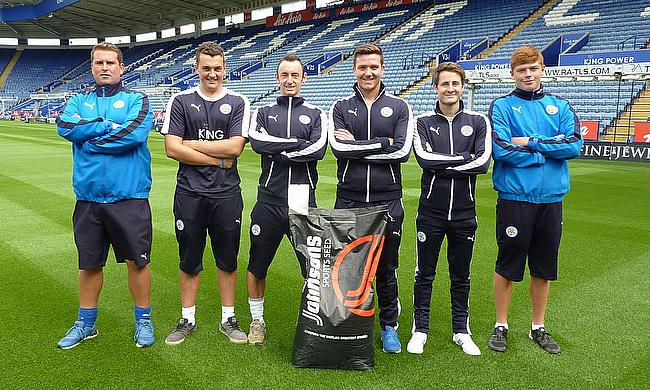 The Rugby World Cup is major, it’s officially the world’s 3rd biggest sporting event. DLF, who have supplied grass seed for the last two football World Cups, are a major supplier again for those clubs that decided to overseed.

In addition to the main pitch, the team is responsible for the 7½ pitches at the training ground.  John has historically used Johnsons J Premier Pitch everywhere he’s been, “It’s tried and tested,” he says, “I trust it to do what it says on the tin.”

“With the playing schedule we’ve been given,” explains John, “the pitch will be subjected to a lot of wear from a completely different species of player – from a ‘twinkle toes’ Footballer to an 18 stone brute force machine of a Rugby player!  This means it is so important to use seed you can trust will deliver when it comes to it.

Because of the known recovery of J Premier Pitch I have piece of mind that we be able to turn the pitch around as 9 days after our last Rugby match we’ve got our first football game. It’s going to be hectic but the whole team is up for the challenge.”

They sowed J Premier Pitch in the summer, bringing them on a month earlier than they normally would to make sure the surface is as strong as possible going into the schedule. John again, “I’m hoping the weather will be fair to us, although with the pitch of a sand based Desso construction it is well versed if it rains and does drain relatively freely.

The main challenge will be to keep the plant strong, healthy and maintain grass cover. With football it is essential to ensure that the grass cover is good, but with rugby it'is not quite so imperative because the ball isn’t played on the ground.  DLF’s Roger Peacock is our area specialist and calls in from time to time to check everything is going okay and to admire our handiwork! It’s good just to have him there should you need any advice on the seed.”