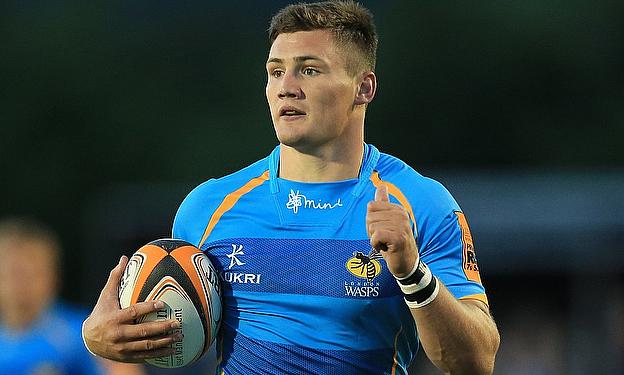 The home fans dominating the 7,547 present at Kingston Park almost saw the Falcons grab victory, but Wasps fought back with a late levelling converted try.

It seemed Juan Pablo Socino would give Newcastle the points when he intercepted Andy Goode's attempted pass to race 60 metres and score the hosts' third try, Tom Catterick converting from the touchline for a 23-16 lead with just 16 minutes left.

But a cracking third try from Wasps four minutes later through replacement Guy Thompson, converted by Goode, levelled the scores.

In the dying minutes Newcastle lost the ball when seeking a drop-goal position and then conceded a scrum penalty which Goode put deep into the Falcons 22. When the chance came, Catterick gratefully hoofed it out to make sure of the draw.

Newcastle came out of the blocks with a stirring start, Catterick chipping ahead from inside his own 22 and Adam Powell collecting to charge away and initiate a series of Falcons attacks in which winger Sinoti Sinoti was prominent.

Just five minutes had elapsed when Sinoti carved through again, full-back Simon Hammersley took it on and Powell fired a long cut-out pass for Alex Tait to score in the corner.

Christian Wade made the crowd sit up with a scorching run which had Newcastle back-pedalling before Goode's sleight-of-hand almost opened up the Falcons defence, but it did lead to three points with Newcastle offside, Goode delivering in the 21st minute.

Newcastle should have scored when scrum-half Mike Blair weaved through just inside halfway and Hammersley found Tait. The winger looked to be in the clear but a great tackle from Elliot Daly stopped him 10 metres out.

Kieran Brookes bounced off two tacklers and it seemed a score was certain but number eight Nathan Hughes was strong over the ball right under the posts to gain a penalty which Wasps desperately needed to survive.

It proved a real bonus for Wasps when they roared back to strike twice in two minutes, with Daly making a try for full-back Rob Miller with a scything run and then scoring himself from flowing inter-passing straight from the restart in which flanker Tom Young was prominent.

Goode missed both conversions from wide out for the score to be 13-8 to Wasps in the 32nd minute, and Catterick was on target with a penalty just before half-time to narrow the gap when Wasps infringed as the maul went down.

Newcastle made almost as fast a start to the second half when they scored in the 50th minute through hard-working lock Josh Furno who also showed he has some wheels when fast hands from Gonzalo Tiesi and Sinoti gave him a 30-metre run-in for the Falcons' second try to put them 16-13 up.

Catterick missed the conversion from wide out and Wasps were back level within five minutes with a Goode penalty after Newcastle hauled down a line-out drive.

Then with 16 minutes left, Socino intercepted Goode's attempted pass and raced way pursued by Joe Simpson and Christian Wade and he somehow slipped both tackles to score, Catterick converting.

The crowd's celebration was cut short when Daly superbly offloaded for Thompson to score and Goode knocked over the conversion to set up an enthralling finish.