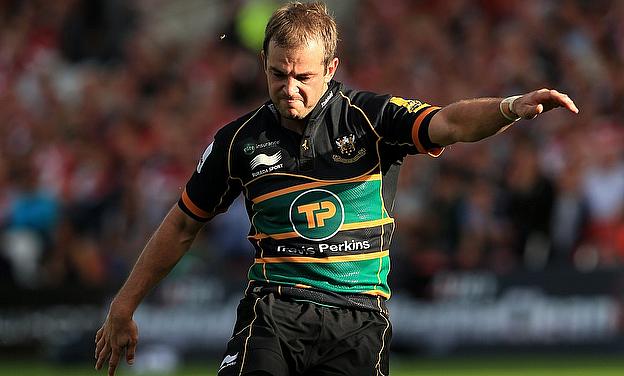 With 40 seconds remaining, Wasps were penalised at a scrum for Myler to hold his nerve and fire over a 40 metre goal from wide out.

It was rough justice on Wasps, who dominated the second half, but three penalties misses from Elliot Daly proved crucial as Wasps' regular kicker, Andy Goode was an injury casualty.

Northampton did score the only try of a very disappointing game through Christian Day with Myler kicking four penalties with Wasps responding with five penalties through Goode (two), Joe Carlisle (two) and Daly.

For Wasps, flanker Ashley Johnson returned after three weeks on the sidelines. Goode and Charlie Davies were recalled at half-back with Davies being preferred to Joe Simpson, who was named as a replacement. Tom Varndell was included on the wing for his Premiership start of the season.

Northampton conceded an early penalty when Luther Burrell was adjudged to have illegally tackled Goode. The outside half was receiving treatment for a leg injury and therefore unable to take the kick but Daly made no mistake.

Northampton looked to have immediately responded when Burrell burst over only for the TMO to rule no try. Sam Jones had failed to get anywhere near the restart kick allowing Burrell to collect the loose ball and crash over the line. The video evidence was reviewed, which showed Varndell being held back by a Northampton player allowing Wasps to escape with a penalty in their favour.

Northampton were not to be denied for long and took the lead after 13 minutes when lock Day finished off a line-out drive for a try which Myler was unable to convert.

Wasps should have been back in front but Daly, still entrusted with the kicking duties, missed badly with a penalty attempt from only 22 metres out to leave Saints 5-3 ahead at the end of the first quarter.

Myler extended that lead with a penalty before the now recovered Goode kicked two penalties in quick succession for Wasps. However Myler had the final say of the half with his second successful penalty to give Saints an 11-9 interval advantage.

Early in the second half, Wasps were dealt a blow when Goode, still suffering with his earlier injury, was replaced by Carlisle, who promptly produced the best break of the match to date by beating two defenders on a 30 metre run which took his side into the Saints' 22.

Wasps then had their best spell of the match but could not capitalise as Carlisle mis-hit a drop goal attempt.

Northampton club captain Hartley took the field after 57 minutes together with Tom Mercey just in time to see the Saints go further ahead with another penalty from Myler. Lawes was another impact substitution for the visitors with Wasps bringing on Simpson simultaneously as both sides attempted to seize the initiative for the final quarter.

Carlisle became Wasps' third kicker of the afternoon and his successful penalty brought the home side to within two points with 14 minutes remaining.

When Northampton were penalised at a scrum, Daly was back in action but his 58-metre attempt fell just short but with nine minutes remaining Wasps had another chance. Wood was yellow-carded for an illegal charge on Joe Launchbury but again Daly could not find the target.

Dickson was Northampton's final replacement with six minutes to go but the scrum-half was guilty of a tip tackle on Tom Palmer and this time Carlisle looked to be Wasps' hero with a successful penalty, before Myler broke their hearts with his late effort.