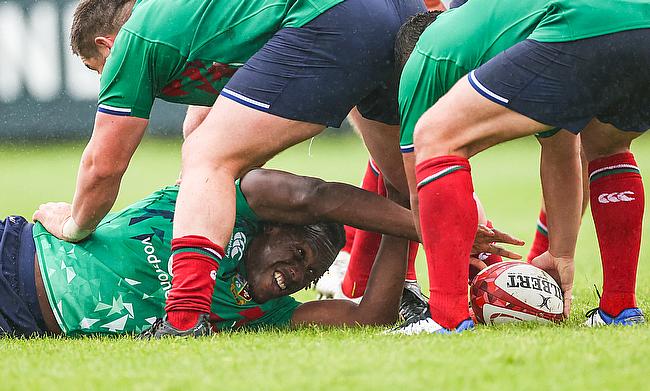 The Lions on the brink, Rassie's videos and why Team GB have done us proud
Rassie Erasmus’ remarkable hour-long video puts Lions Test officials in the spotlight
Lee Mears Column: 'Being 1-0 up is huge but as we saw in 2009, the brutality will go up another level'
Coolness personified - Jack Conan seizing his Lions opportunity

To say England struggled during the Six Nations might be putting it mildly. Carving out wins against just Italy and France was not a great return and Eddie Jones’ selections were thrust into the spotlight as his team slumped to a fifth-place finish.

The finger-pointing arguably began after their shock defeat to Scotland at Twickenham, but following a below-par performance against Ireland in Dublin, the pitchforks were out in their droves.

One of the underlying criticisms throughout the tournament was whether Saracens’ contingent within the England squad would be ready for the intensity of Test match rugby.

Following the club’s relegation from the Premiership, Mark McCall’s side hadn’t played a competitive game since October 2020 due to the pandemic delaying the start of the Championship season.

But this didn’t stop Jones initially selecting Jamie George, Maro Itoje, Billy Vunipola, Elliot Daly and Owen Farrell for the Six Nations and after a sluggish start against the Scots, the Sarries stars were deemed ‘undercooked’ and off the pace.

“Our players won’t be undercooked in any way. Our players are getting more rugby than the Welsh, Scottish and Irish. They’re hardly playing at all. Look at them and see if they’re undercooked."

Despite his best efforts, the aforementioned Itoje was one of England’s scapegoats. The number of penalties he conceded during the championships didn’t go under the radar but those who questioned the 26-year-old’s temperament four months ago might have had their lips tightly sealed last Saturday night.

Itoje’s colossus, man of the match performance for the British and Irish Lions in the first Test against South Africa was the epitome of the Saracens man in his element. In truth, he was a central figure in turning the game around for Warren Gatland’s side.

“I know he had a couple of games in the Six Nations when the penalty count was against him, but he was playing on the edge,” Saracens assistant coach Kelly Brown tells TRU. “Last weekend, I thought he was really good.

“Ultimately, he is an intelligent player. He’s a very competitive player and he is very good athletically as well. When you put those three things together, it makes him a pretty good player! He just did what Maro does. He has got a habit of being involved in the big moments which can turn games and that is exactly what he did.”

Itoje’s crucial interventions, especially in the final two minutes, meant a late Springboks turnaround wasn’t forthcoming. Even when the Lions had their backs against the wall during the first period, the towering second-row kept his cool and helped the men in red gain a much-needed foothold in the game.

And there lies the difference.

In the white of England, when things were going against them in the Six Nations, Itoje was on the wrong side of the decisions. Last Saturday, he was measured and his discipline was rewarded.

“Look, he has always been clever in the reading of the game,” says Brown, who has coached and played with Itoje.

“I remember when he came through at Sarries and he just picked up things so fast. Other players, you may have needed to tell them over and over again, but with him you tell him once and by the next week, he would be doing it consistently well every time.

“That is something that he has certainly taken forward. I think it is just a natural attribute which he has got. He will pick up detail and knowledge relatively easily and he is able to apply that.”

The fact that advice from coaches didn’t need to be drummed into Itoje is a key element which Brown believes set him on the road to stardom.

Of course, Saracens dropping down to the Championship was not ideal for Itoje and his teammates, but Brown never doubted the impact the 26-year-old would have out in South Africa despite playing his domestic rugby in the second tier.

“At Saracens, we always like to set our academy players at an appropriate level,” says Brown. “We will never rush anyone in if we don’t feel they are ready, but with Maro, he very, very quickly ticked off all of the clubs he was on loan to in National Two, National One and then the Championship!

“He sort of flew through it and that was the impressive thing, the speed with which he was able to develop and progress.

“He has been very good for us all season as well. Whether it is playing Ampthill at home or Coventry away or playing in the first Test for the British and Irish Lions, he approaches it in exactly the same way. I think that in itself is a skill and I think that is why he is one of the best players in the world.”

Brown was also quick to throw fellow Saracen Mako Vunipola into the bracket of ‘world class'. The loosehead prop did return to the England set-up for the Six Nations after recovering from an Achilles injury, but the minimal game time the 30-year-old had under his belt made people ponder his selection.

Even Gatland thought Vunipola lacked fitness when he joined the Lions following Sarries’ truncated season in the Championship, but like his club-mate Itoje, he proved any doubters wrong last weekend.

Originally, Vunipola had been omitted from the 23-man squad for the first Test, but his services were called upon after a shoulder injury ruled Wyn Jones out of the game.

What followed was a 20-minute cameo off the bench from Vunipola which helped turn the tide in the Lions’ favour.

“I think the criticism that has been levelled at him has been a bit unfair,” Brown adds. “It was just great to see him get the opportunity to come on to show what he can do and to, in the nicest possible sense, shut a few people up!

“Mako is a world-class player and his set-piece is very, very good. Around the pitch, he can do things no other loosehead in the world can do so not only is he powerful in the collision area, but he has also got incredible skill.”

The experienced Vunipola is set to start his fifth Lions Test on Saturday as Gatland’s side look to clinch a famous series win. The Saracens prop will also be up against tighthead Frans Malherbe, who came off second best last weekend following his introduction at half-time.

“Knowing Mako as I do, he will want to still prove a point and I fully expect him to do it,” Brown says.

“The Springboks are going to go for him. Frans Malherbe is in at tighthead so he obviously came off the bench to scrum against Mako last weekend and the expectation was that he would be on top, but he wasn’t. The pair of them will be highly motivated and I am expecting Mako to be up to the challenge.”

As our conversation turns back to Saracens, Brown states despite “pages and pages written” about their stars being “undercooked” in the Six Nations, the club’s players who are over in South Africa are showing why they are in rugby’s elite.

Whilst a first series win over the Springboks since 1997 will be narrative across the course of this weekend, as well as Rassie Erasmus’ antics, the new Gallagher Premiership campaign is slowly coming into view.

Brown will also be keeping his eye on the Scottish contingent in the Lions squad on Saturday, but his focus will quickly shift to Saracens' return to the top-flight as they prepare for their second week of pre-season.

They kick-off the 2021/22 term on September 17th against Bristol Bears and in the absence of the five-time champions, the strength of the league has grown.

This was of course highlighted by Harlequins producing two outstanding performances in the play-offs and the final to dethrone Exeter Chiefs whilst the rise of Bristol and Sale Sharks will continue to add intrigue ahead of the new season.

But what of Saracens? With their star-studded squad remaining intact despite their relegation, how will they fare on their return to the Premiership?

For Brown, who re-joined the club as a coach in February, the excitement is starting to bubble.

?? There are just 5??0?? days until our Premiership campaign kicks off in Bristol ??

“The Championship is a league, I’ll be honest, I didn’t know a huge amount about it before this season,” Brown admits.

“We trained incredibly hard and we planned and prepped for each game as if we were in the Premiership so this year has been no different. We have just been playing some different sides, but potentially at times, we’ve challenged ourselves against our own standards which has been led by the Lions boys. They have been incredible in driving that.

“Probably one of the most pleasing aspects has been, despite all the setbacks over the last 18 months, is how the group both on and off the pitch have really come together. We obviously speak about our culture and it is easy to speak about that when you are winning everything, but we have certainly had a couple of setbacks. We are proud of how our group has reacted, come together and fought incredibly hard for each other.

“For us, it is great to be back in the Premiership. We are obviously aware that all of the other teams have moved on and developed, so it will be tough, but we are excited with the squad we have got and we are looking forward to testing ourselves again against these teams.

“Our first game is Bristol away and what a brilliant challenge that is because it can show us where we actually are. We have got seven or eight weeks of graft in pre-season and then we are into it and we absolutely cannot wait.”