Kate Zackary Exclusive: "That development of the game in the US, it has to start now' 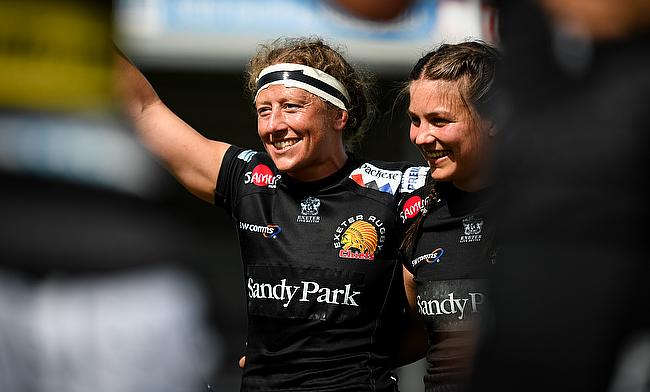 Rosie Galligan Interview: ‘Living in the moment’ and helping Harlequins achieve their goals
Australia to host Rugby World Cup 2027 and 2029, USA venue for 2031 and 2033
England chosen host for Rugby World Cup 2025
Victoria Rush Interview: 'Reading men say they want to be better at accepting women’s sports, that for me is special'

"For the players who have uprooted their lives to move here and pursue this dream, for the fans who are buying their tickets every week and supporting us come rain or shine, I think it would mean everything," says Kate Zackary, the Exeter Chiefs co-captain.

Last Saturday, a crowd of 2,657 witnessed another piece of history at Sandy Park. Fans turned up in record numbers - with swathes of people decked out in superhero costumes - as the Chiefs fought off the challenge of Bristol Bears to secure their 13th and final win of the regular season.

Zackary and fellow USA international Jennine Detiveaux both scored twice whilst Emily Tuttosi also dotted down as Exeter took another step towards an unprecedented league and cup double.

The Chiefs, who are under the stewardship of Susie Appleby, are approaching three years since they were formed and last weekend's victory was another staging post in the upward trajectory of the club.

Their 29-26 triumph secured Exeter a home Allianz Premier 15s semi-final - which is a significant achievement considering this is just their second-ever season competing at this level - but you can argue that just breaking into the top four is a noteworthy milestone in itself.

"It [top four] was actually always a target for us," says Zackary. "I think we had a really successful outing last season. We narrowly missed out on top five, but we hit that number six spot and that was immense. I think looking ahead to this year, retaining such amazing players internationally and domestically, we knew we had set the standard last season and it was one we could easily meet and go far beyond so top four has always been our dream since the beginning.

"I think you see it with some of the best teams like your Sarries, Quins, Wasps who have the ability to keep so many players. It allows you to build a foundation, it allows you to develop a playing structure, a playing style for years and then just refine that from there on out. For us to build the foundation and just be able to grow on it this year meant we were starting further ahead than we were last year. We celebrated the regular season, but now everyone's mindset has shifted."

The season has been a memorable one for Exeter, but they aren't finished just yet.

After last week's highly charged game against Bristol, the two sides collide once again at Sandy Park on Sunday as both look to create some personal and collective history. Whoever comes out on top in Devon will enter their maiden Premier 15s final but it will be the first time in the competition's short existence that the showpiece event won't be contested between Saracens and Harlequins - with the heavyweights paired together in the other semi-final.

A repeat of last Saturday's outcome would do just nicely for Zackary, but the USA skipper also appreciated the bigger picture as the landscape in the top-flight begins to evolve.

"I was sitting chatting with the Bristol coach [Dave Ward] post-match and we both agreed it's amazing to see the development across the league and now the challenge coming from teams you haven't seen before," says Zackary.

"We want to see the players develop and we both agreed that it will be great to see, no matter what, a new team in that final."

Zackary's point about players wanting to compete at the highest level to aid their international ambitions might be best encapsulated by the Chiefs themselves.

The back-rower - along with clubmates Detiveaux, Hope Rogers, Rachel Johnson, Megan Foster and Gabby Cantorna - were all named in the USA playing pool at the start of the month as preparations continue for this year's World Cup.

Both Zackary and Detiveaux were also at the heart of Exeter's recent success over Bristol, in the same week when it was announced that the States will be hosting the World Cups in 2031 and 2033.

"We are trying to get the WPL - our Women's Premier League - back on its feet in the US after Covid and we have got a bunch of wonderful players playing there now this season, but at the moment, it is still quite small," says Zackary. "It is still recovering so looking to the grander scale of a World Cup year, it's the right fit [to be playing in England] for now just to get players here and playing.

"We don't get paid a lot and we do have to uproot our lives, but we are having the support of the clubs so you are able to be here and in that full-time environment which is where the US will get to. We are just not there yet.

"It would be massive for the US to be able to match what is going on in some of these other leagues. Super Rugby is also trying to get that off the ground with their women's game so finding partnerships (like Exeter have done) whether that is with the MLR or other investment opportunities, it would be great and really meaningful to be able to stay Stateside and play in front of friends and family because that is something that you do miss here.

"Big picture 2031, 2033 and beyond though, by developing our game and elevating it in the US, it just allows people to stay put and then train together as a USA team alongside your club."

Zackary is likely to lead the Eagles - who face Canada, Italy and Japan in the pool stages of this year's World Cup -  over in New Zealand, but she believes the hard work, both on and off the pitch, has to begin now if the tournaments in America are to leave a lasting footprint.

"It is a massive opportunity for us," she says. "Rugby is one of the fastest growing sports, particularly the women's game. In the US, we love sports. We love new sports and it is just now about continuing to gather the interest to get it in front of people over the course of the next decade.

"People will be surprised about how amazing the events will both be. Having back-to-back events is going to be amazing for both sides of the game to try and keep that level playing field of men's and women's rugby in the States. That development of the game, it has to start now."

Zackary also represented the USA in the 2018 Rugby World Cup Sevens in San Francisco and even in that short three-day period, she noticed a buzz around the competition. Reports suggest that the US may be able to utilise some American Football stadiums for 2031 and 2033, and it is that vision which the Eagles forward can get on board with.

"Off the pitch, a lot of it is just going to be the marketing, getting the right TV bids and just getting games for the next 10 years between MLR [Major League Rugby] and international on TV. Even the English Premiership and Super Rugby, just getting it on TV. You want to flick through channels and find rugby everywhere you go so people start watching it and start getting interested."

And what about growing the game on the field?

"I think is about continuing to encourage universities to maybe elevate rugby because I think it can create opportunities for players," Zackary continues. "We pay for their education, we get them into sport, we give them high-level coaching so on the field I would say that. Encouragement from that 16/17/18-year-old stage so that they can go to university, get paid for their education and play sport and hopefully that can get them into the US system.

"It just creates that right pathway to the national team so in 2031 and 2033, you have got players who have been playing high-level rugby from anywhere between six and 10 years essentially."

From an international perspective, the immediate goal for Zackary and the USA is to show that they are "a competitive top tier nation that can compete with the best consistently" during this year's World Cup but before that, the Chiefs Supporters Club Player of the Season is aiming to add another trophy to the cabinet.

Exeter head into Sunday's semi-final having lost just once since the turn of the year and with a raucous Sandy Park crowd backing them to the hilt, they are ready to write the latest chapter in their short but developing story.

"Confidence is high", Zackary says. "Everyone is feeling really good. Obviously, it is a great vibe in camp right now, but the big message this week was obviously that was then and this is now. It is that transition from regular season to post-season and to a match that has such high stakes at this point.

"It would be a massive movement for the club [to reach the final] because looking ahead, it is a standard we could set which will be a challenge to maintain year in, year out but I think it is a task that everyone is up for."