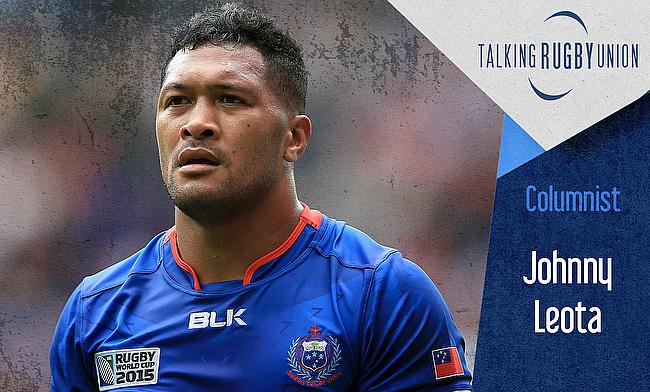 In his first column of the season for TRU, Johnny Leota reflects on Samoa’s win over Russia + he looks ahead to Scotland and talks all things Sale FC & his new role at Manchester Met.

We came through the arm wrestle against Russia

It was definitely a good way to start. I think the way that Russia started off as well against Japan, we knew it wasn’t going to be an easy game and they came in with the same game plan.

I thought after watching it in the first 10 minutes, the boys did well to stay in the arm wrestle for the first half and then let loose in the last 20. We scored some really good tries throughout the whole of the game and I did think the whole defence was really good to be fair and the boys battled hard.

I don’t think you can underestimate any team if you want to go forward and that should be the same whether it is Tier One or Tier Two. You saw against Russia it was a tough game and Samoa were able to see out the pressure from Russia. I think the boys were prepared for it and they would have got themselves ready for the game in the same manner, no matter who they were playing against.

I think Samoa’s defence in the last few games has been going well and we saw that against Russia, but I do think the overall preparation of Samoa has been good.

They did play well against Australia before the tournament and held Fiji and USA out to score only one try in each game so I think if they can continue to go from there, I don’t see why they can’t beat Scotland. I am backing them too!

It is always good to have that support. Sometimes, I think with the Pacific Islands, you do get a lot of criticism but you do get a lot of support and we have seen that in Japan. They are emotional fans and proud. I know the boys will appreciate it. So, lets’ get behind our boys and give them our full support they deserve.

I remember the 2015 World Cup when we didn’t do so well, we copped a lot of criticism from some fans because we didn’t perform as well as we should of. We were expected to get through the group stages. In the 2011 World Cup, it felt like we had the whole world behind us with the amount of support and love with got. The send off that the people of Samoa gave us to that World Cup will stay with me forever.

It was great to get the wins against Old Elthamians. We didn’t start off the best, but we stuck to our gameplan which we were given during the week. We had a review to make sure we did everything right which we needed to win and it went well for us last weekend. To back that up with a win over Canterbury is pleasing too.

We of course want to build on from there and finish higher than last season (11th). We started off well and then had a dip around February/March time and we ended up further down then we thought we would. We believe in ourselves that we can definitely finish up in the top six. I don’t want to say too much because we will assess the season week by week! If we can continue playing like we did last week, then there is no reason why we can’t set our aims high for this season.

I have known Tom for a few years. We were both going through some struggles this time last year because we were both unsure about what was ahead for us. It was good to have someone to talk to who was in the same situation.

On to the next chapter. pic.twitter.com/Gdc0qZbcYL

He went away last year and now has come back this year and joined up with Sale FC. He is playing really well and I think he is in a good place at the moment. His wife is pregnant and he has a job he likes so in terms of life and rugby, he is in a good place. You can tell this by the way he has been playing for Sale FC because he’s been one of our form players so far.

It is something I have wanted to do. I have been doing a bit of skill coaching here and there, but Manchester Met gave me the opportunity so I thought I take it. I’m still learning because this is my first time in a coaching role. As a player, you can read everything on the run but as a coach you have to teach others how to read those situations on the run. I have found that challenging so far but that’s what I love about it. I can’t wait to see where we are in a few months’ time!