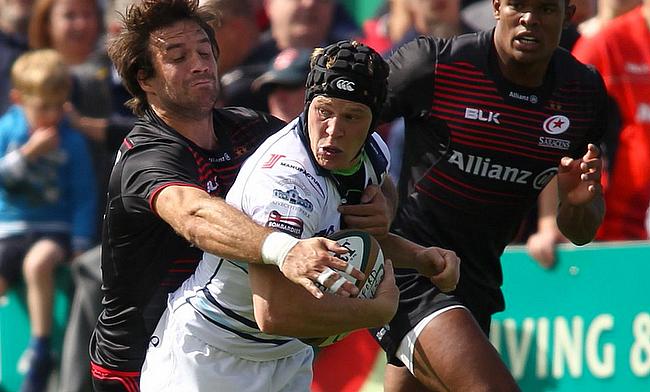 Will Hooley has his sights set on performing well for Bedford, but also representing the USA at next year's World Cup
©PA

Bedford Blues' Will Hooley chatted to Joe Harvey about all things Championship rugby, representing the USA as well as his personal ambitions at club and international level.

“It’s Dad’s side of the family, his mum, my Granny, who was born and raised in California,” explained Will Hooley when asked about his international call-up to play for the USA.

“I was playing for Exeter in my first year there. It was a game against Worcester and there was this couple sitting next to my dad in the crowd who were American. They just talked about America, nothing about me, and the guy sort of said ‘why are you here’ and my Dad said, ‘Number 22 is my son.’

“The guy put two and two together and said, ‘My name is Mark Lamborn. I’m on the Board of Directors for USA Rugby and I would be really interested in keeping an eye on your son.”

However, only after a concussion that Hooley sustained when playing against Harlequins that thoughts of playing for the Eagles really started to take flight.

Can't thank @sportsframe enough for sorting out my first @USARugby cap and shirt. So happy with the final result! ?? pic.twitter.com/PsA9tyD1OB

“I spoke to the then head coach, John Mitchell, and he was brilliant,” Hooley said. “Basically, he said that, ‘We want to take a punt on you, believe in your talents, be with this squad and represent the US.’ I though that this (playing for the USA) is what I need to be honest and it was the best decision I ever made.”

Aged only 24 and now with Championship side Bedford Blues, Hooley’s young career has already had its fair share of highs and lows. The highlight, most likely being chosen to represent the USA in January, contributing to the Eagles second Americas Rugby Championship victory.

“I made my first appearance for the US against the Argentina XV in February this year in LA,” he said. “It was surreal and the rest is history. It has been an unbelievable journey so far.”

Walking into the Eagles camp wasn’t as daunting as it would perhaps have seemed. Joining a team with two of his former teammates from his Northampton Saints days, Hooley didn’t feel out of place in Gary Gold’s USA squad.

He added: “I was lucky that I knew a couple of the boys. I knew Cam Dolan and Samu Manoa who were at Northampton Saints with me. To be fair the one thing about Americans is they are genuinely so welcoming and just friendly.”

A former England U20 player as well, Hooley was part of the squad that won the 2013 Junior World Championship, where the likes of Jack Nowell, Henry Slade and Anthony Watson started to come out of the woodwork and began to make a name for themselves.

During that tournament, Hooley played against the USA, when he contributed to England putting over 100 points on the nation that he would end up representing.

In the June Internationals, USA had an historic victory over Scotland that surprised many rugby fans, but not anyone involved in that Eagles squad: “Everyone was a bit like, wow the USA have beaten Scotland, but for us we believed we could and I think USA rugby is on a high, it needs to continue that way,” said Hooley.

“Since Gary Gold’s been bought in, he has been fantastic. He understands, basically hard work, he says that we’re going to work harder than any team we’re going to play against.”

Hooley partly attributes the recent successes of the national team down to the introduction of the professional league in America, the MLR: “You’ve got guys playing professional rugby, it can only be a good thing and it has obviously been a good thing because the MLR had a very good first year and I think it is only going to get bigger and better.”

Following his spells at Northampton and Exeter, Hooley made the decision to take a step down to play for Bedford, following a conversation with former Northampton scrum-half, Lee Dickson who was also moving to the Blues.

“Getting back into playing regularly in a really tough league has only done me massive amounts of good,” he said. “Yeah, my goal for certain is to be back in the Premiership and be back where I was before, competing at the top of the tree.”

The decision to drop down into the Championship was by no means an easy one for Hooley, but he had the support of those around him, especially his then Director of Rugby, Rob Baxter.

One of the catalysts for Will’s move away from Exeter was a concussion that he sustained against Harlequins in the autumn of 2016. This led to a long time out of the game for the young fly-half.

“It’s difficult because it is about you and how you feel, and I didn’t feel good at the time,” he added. You get very down about things, depressed that you’re not playing and ultimately you’re not the person you want to be and the one you should be.”

As Hooley’s short career has already been mightily affected by concussion, it seemed prudent to ask what he thought of the new tackle law that has been brought in for the Championship Cup which is the competition that will be replacing the British and Irish Cup that is due to start in November.

“If they didn’t feel that the research had been done to show that this should, in theory, help. So, I guess it has to be a good thing,” explained Hooley. “I would say that in personal experience, and experience in general, a lot of these concussions that you see are the tacklers themselves.

“I do think the issue as a whole is far more complex than just saying that these (new tackle laws) are really going to bring concussion down, because I think it happens in so many different ways and unfortunately I don’t believe the law itself will decrease concussion in general.”

Hooley’s current side Bedford have had a steady start to the Championship season with two wins and a defeat and the fly-half was impressed with their early victories against Jersey Reds and away to Nottingham, “It has only been a couple of games of rugby, but ultimately I think it has been a good start.”

Match report from today's 26-22 win over @jerseyrfc is now on the site. Two tries for @Charlie_clare one for @DeanoAdamson and then a team Penalty Try secures the bonus point win with @ed_coulson knocking a couple of conversions over #COYB https://t.co/MlLz5hAovQ pic.twitter.com/gWkhjo14C6

“We wouldn’t say that we are playing our best rugby, but I don’t think anyone in the Championship would say that they’re playing their best rugby at the moment. It has been challenging, but if you said to us at the beginning of the season in the first two games we’d have two victories, then we would have taken that.”

Despite losing the clubs big names, Hooley believes that Bedford can finish in a similar position to last season: “I think people outside the club would think we over achieved, but internally we thought we were capable of doing well last year and we did.

“This year we’d obviously love to be saying top four status, but at the same time the Championship seems to be more competitive than ever this year and every game is going to be tough. Ultimately, we’re going to be taking one step at a time and wherever that leads us, hopefully it will be towards the top end of the tree.”

Currently out with a concussion sustained in the opening game of the season at Nottingham, Hooley has some simple objectives that he is hoping to achieve in the coming campaign.

“To be playing for Bedford week in, week out. I think we’ve recruited some good players this year and our pack is strong, so I’m excited to be a part of that. I want to get to the November internationals. We have big games against the New Zealand Maori, Ireland and Romania and that’s exciting.”

“I’m not thinking about this too much, because I’d be foolish to, but there is a World Cup in 2019. I want to be in the best form possible and have the best year possible, because that is the pinnacle. Japan 2019 has to be something on the radar.”