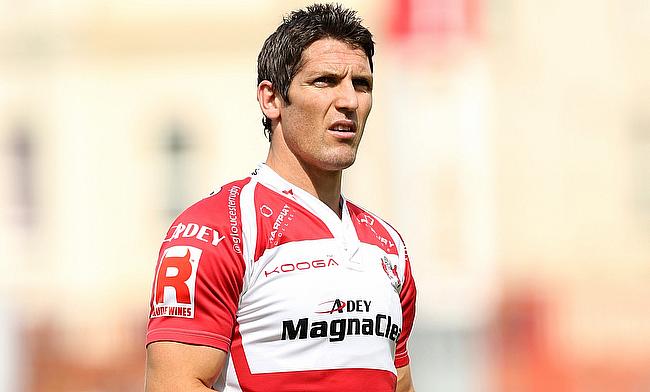 On a quagmire of a pitch, Irish had deservedly led 14-6 at half-time through converted tries from Alex Lewington and Ciaran Hearn as they searched for back-to-back Aviva Premiership wins for the first time in nine months.

Gloucester - who were without the injured Jonny May and Henry Trinder - who took the lead when Hook fired over a third-minute penalty.

The visitors were not behind for long, though, with Irish claiming the opening try of the match in the seventh minute. A clever kick from Brendan McKibbin secured his side a line-out five metres from the tryline, from which Hearn burst past some poor Gloucester defence to score.

Chris Noakes converted to make it 7-3 before Hook responded with his second penalty to reduce the deficit to one point on twenty minutes.

Both sides struggled to come to terms with the difficult conditions but with the assistance of the wind, Irish had the better of the opening 30 minutes with most of the play taking place in the Gloucester half.

After 32 minutes, Irish deservedly went further ahead with their second try. A clever cross-field kick from Noakes was gathered by Lewington, who outjumped a static Rob Cook to crash over for the score which Noakes converted for a 14-6 half-time lead.

That was as good as it got for Irish, though, as Gloucester's 21 unanswered points in the second half would prove decisive.

Within four minutes of the restart, Hook reduced the deficit with another penalty as Gloucester raised their game from the lethargy exhibited before the interval.

Following sustained pressure from a suddenly bouyant Gloucester, Alex Lewington was yellow-carded as he dived in to save a score but Gloucester got their reward when Hook knocked over his fourth penalty to close the gap to two points.

The home side then introduced Greig Laidlaw and Mark Atkinson in place of Will Heinz and Billy Meakes and, with Lewington still absent, Irish infringed again for Hook to give Gloucester their first lead of the game, 15-14, with 20 minutes remaining.

With momentum now firmly in Gloucester's corner, the Cherry and Whites notched their opening try through Kvesic, who finished off a line-out drive with Hook converting.

And within 30 seconds of coming onto the field, Burns rounded off Gloucester's best move of the match to score his side's second try to provide a final scoreline which, whilst reflective of Gloucester's dominance in the game's second forty, was ultimately harsh on a valiant Irish effort.