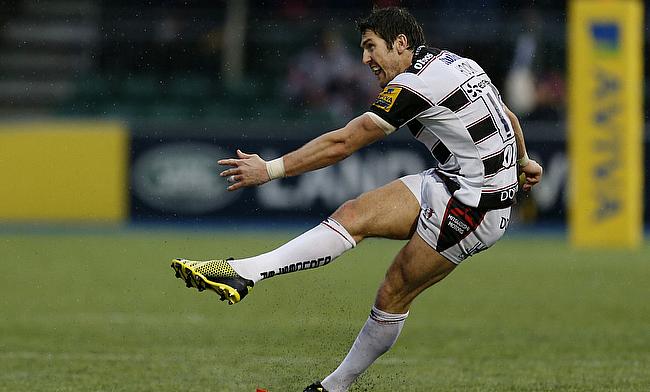 Fifteen points from James Hook kept Gloucester in contention for Aviva Premiership play-off and Champions Cup places with a convincing 32-6 victory over Newcastle at Kingsholm.

Hook scored an individual try and kicked two penalties and two conversions before being replaced by Billy Burns with 16 minutes remaining.

Gloucester's win should have been even greater for they led 20-0 midway through the first half, but three missed kicks from Hook and an error-ridden second-half performance from them kept the scoreline respectable for a very ordinary Newcastle side.

Gloucester made seven changes from last week's defeat at the hands of Saracens. Ben Morgan was an injury absentee with Matt Kvesic placed on the bench. Wing Henry Purdy was back after injury with fellow backs Rob Cook, Meakes and Willi Heinz all returning to the starting line-up.

Kvesic's presence on the field however was made necessary before the second minute had elapsed as Jacob Rowan was stunned in making a tackle and had to be helped off. The replacement flanker was on in time to see Hook first miss a penalty before kicking one to give Gloucester an early lead.

The hosts continued to dominate the opening period with Kvesic heavily instrumental, and they were rewarded with their first try when a clever kick ahead from Heinz saw Meakes collect and score for Hook to convert.

Hook did miss a penalty but he soon made amends by handing off a weak tackle from Newcastle prop Tai Vea to score a try, which was converted for a 17-0 lead at the end of a one-sided first quarter.

Hook extended that advantage with his second penalty before Newcastle suffered a further setback when flanker Mayhew suffered an injury, but they did get on the scoreboard with a penalty from Willis.

However Willis was at fault for Gloucester's next score when he failed to stop Moriarty, who powered past him for the home side's third try, after an excellent pass from Mariano Galarza had set up the Welsh flanker.

With the last kick of the half, Willis kicked his second penalty but his side still trailed 25-6 at the interval.

Callum Braley replaced Heinz at half-time for Gloucester with Newcastle also making a change which saw Mouritz Botha introduced in place of their skipper, Will Welch.

In the second half Gloucester resumed control, but for a long period careless errors and frequent concession of penalties prevented them from capitalising.

Almost the entire half was played in Newcastle territory but it remained featureless and scoreless until six minutes from time when Savage crashed over for the bonus-point try.

Gloucester to name Skivington as their new head coach