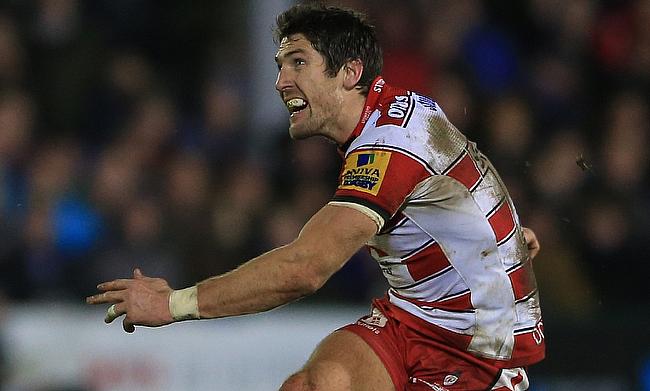 Former Wales international James Hook kicked five penalties as Gloucester fought back in abhorrent conditions to stun Bath 15-11 and leap to fifth place in the Aviva Premiership table - if only for 24 hours.

Friday's result was a double blow for struggling Bath; not only did Gloucester secure a rare away win over their West Country rivals at The Recreation Ground, but the narrow defeat was also Bath's sixth consecutive loss in all competitions.

A consolatory losing bonus point leaves last year's free-scoring Premiership finalists languishing down in ninth position, having lost seven of their 10 league games in 2015/16. Their points on the night came from an early Dominic Day try and two penalties by full-back Tom Homer.

Bath started strong, pummelling Gloucester in one corner of the Rec for almost the entire first 15 minutes as they conceded a string of penalties at maul and scrum.

And Referee Matthew Carley's patience was finally stretched too far when he sent Gloucester's second row Tom Savage to the bin in the 11th minute for diving under a maul.

Bath took advantage straight away, a catch-and-drive giving Welsh lock Day his first try of the season, although Homer was wide with the conversion.

Gloucester then came close to compounding their own poor start after Kyle Eastmond's rolling kick to touch was unwisely thrown back in immediately by winger Steve McColl to full-back Billy Burns who was subsequently caught in possession behind his own line, gifting Bath a five-metre scrum.

Gloucester stopped No 8 Leroy Houston from muscling his way over but only at the expense of yet another penalty kicked by Homer with 19 minutes on the clock.

The heavy drizzle and soggy conditions underfoot blunted both side's attack, but when Bath scrum-half Rob Cook got fingers to a pass from opposite number Willi Heinz, Heinz's teammate Hook knocked over the visitors' first points from 40 metres on 28 minutes.

Gloucester's momentum was bouyed after the half-time break, with the switch in ends meaning it was Bath who were now forced to play into a heavy wind and near-horizontal rainfall as the second forty began. Gloucester's now favourable conditions meant it was no problem for Hook to land his second penalty of the game, again from 40 metres, shortly after the restart although Homer defied the elements at the other end to push Bath's lead back to five points, 11-6, after 47 minutes.

And with the conditions forcing errors from Semesa Rokoduguni and Horacio Agulla on Bath's wings, the home side conceded two more penalties in quick succession and Hook kicked both to put his side ahead for the first time on 56 minutes.

A long rolling kick by the Welshman had Bath in trouble again as Agulla was caught in possession and conceded a penalty. The kick was wide out on the right, however, and faded past the post.

But he could not miss from in front of the posts on 65 minutes. First Alafoti Faosiliva was robbed by Matt Kvesic and then Heinz made a piercing break and Bath gave away at the breakdown.

Bath simply could not mount any meaningful pressure of their own and looked even more rudderless once skipper Stuart Hooper went off. It could have been worse, but Hook was wide with another penalty attempt.

Bath never really looked like scoring, despite their frenetic efforts in the last 10 minutes. A line-out offered a faint chance in the final seconds but Kvesic pounced again to win a penalty at the breakdown to end all doubt.