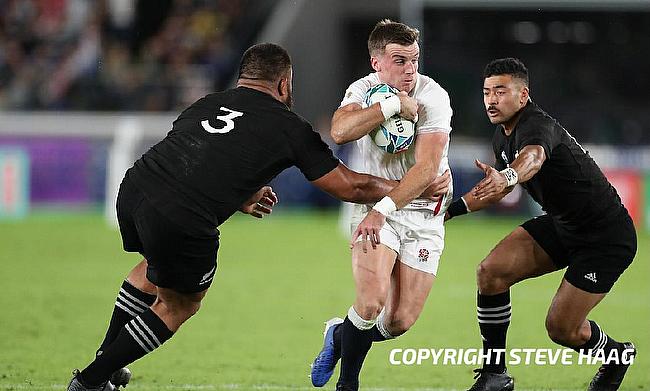 It will be somewhat of a balancing act for Jacob Ford this weekend.

On Saturday at Westcliff Rugby Club, his head coach duties at the National Two South side will be put to the back of his mind until the afternoon as he watches his older brother, George, represent England in a World Cup final.

“Commitment,” Ford Jnr says when asked about the journey George has been on to reach the pinnacle of the sport. “A lot of people don’t see the effort he has put in so for him now to be where he is, the commitment has paid off.”

Hard work is something which filters down to Jacob too. Having being involved with Loughborough University’s high-performance programme last season, the 21-year-old qualified as the youngest ever RFU Level 3 coach in the summer as he swapped the Midlands for Southend-on-Sea.

“I was at Loughborough and they have a fantastic performance programme,” Ford reflects. “I was coaching the BUCS Super Rugby team and involved with the National One team as well, but I thought I’d have a look to see what else was out there.

"We're trying to change the culture and the result on Saturday was a by-product of that."@westcliffrugby head coach Jacob Ford says their first win in the National League is a testament to the set-up at the club, including the youth coming through the ranks. pic.twitter.com/BcTvAi6p0L

“A conditioning coach called Steve Walsh called me and said Jordan Turner-Hall (also involved with Westcliff) is going to Ipswich School to coach, would I be interested in going with him? I entertained the idea and went down.

“To be fair, the school has blown me away, but I said I wanted to also stay involved with performance coaching. I had a look around and it just happened that Westcliff were looking for a head coach. Next thing you know, I’ve moved down here and the season has started!”

It has been a step into the unknown for Ford and Westcliff this term. Both are experiencing National Two South for the first time and they take on a high-flying Henley Hawks this weekend.

However, before Round Nine in the National Leagues gets underway, Ford will take his seat in Westcliff’s clubhouse to see if his brother can win the biggest prize in the sport.

The last time England competed in a World Cup final was 12 years ago and, on that occasion, the Ford clan were present in Paris. Jacob, George and eldest brother Joe watched on from the stands whilst father, Mike, was part of Brian Ashton’s coaching staff.

Fast forward to 2019 and it is George who will be aiming to defeat South Africa as England look to become world champions for only the second time.

“As a family, we are incredibly proud,” Ford says. “Everyone said ‘isn’t he lucky?’ and I said no he’s not! I have seen him grow up since we were running around in the garden and the hard work he puts into rugby was just phenomenal.

“The amount of times he would spend just kicking everyday down at the local playing fields with me and my brother just shows the sacrifices he’s made over the years. He has been through some tough periods, especially towards the end of his time with Bath, but coming out the other side of those periods has made him a stronger and better person.

“You look at him now in a World Cup final and you think, ‘Jesus!’ I can’t think of anyone else who deserves to be there more than him.

“All three of us were there in 2007 when England played South Africa. My Dad was obviously a coach then and it kind of feels like a repeat, but the other way around and George is playing against South Africa so it is funny how it works out!”

George will start his fifth match at this year’s World Cup on Saturday, but at the beginning of 2019, Ford may have been wondering, if selected to go to Japan, how much game time he would receive.

Last summer, Ford started at fly-half in England’s first two Tests against South Africa but was replaced by Danny Cipriani for the final game of the three-match series. Owen Farrell was then preferred at 10 during this year’s Six Nations but a re-emergence of the Ford/Farrell axis during the World Cup warm-up matches was a major reflection on Ford’s dedication to reclaim his place in Eddie Jones’s starting XV.

'He silences his critics and puts in incredible performances'

Danny Care has been impressed with George Ford's #RWC2019 performance!

“Individually, he has come on such a long way in the last year,” Jacob says. “I was coaching at Loughborough last year and he was there pretty much every week doing sprint training on his own and doing everything possible in every area to be the best version of himself and be the best prepared he could be for the mindset of this World Cup.”

Polished performances in the pool stages vindicated Jones’s decision to stick with Ford at 10, but when the fly-half was named amongst the replacements for England’s quarter-final with Australia, many were surprised by his omission.

“I spoke to him after the Australia week,” Jacob adds. “I said you must be disappointed you are not playing at the weekend and he just said ‘I am not disappointed. I have just got a different role this week and I have got to do that role as best as I possibly can.’

“I was just like, wow! If I dropped a player at Westcliff, I wouldn’t get that response! He came off the bench and he did everything possible in that 10 minutes to put himself in the frame for the following week and it just shows if you keep your feet on the floor, keep your head down and work hard, it does pay dividends. It is just a testament to his character.”

Ford, in tandem with his long-time friend Farrell, produced a fine display in England’s magnificent all-round performance against New Zealand and it is unsurprising Jones has named an unchanged side for the final.

Jacob was described by Westcliff club director Darren Morrant like ‘a cat on a hot tin roof’ whilst viewing the semi-final last weekend and Ford Jnr will no doubt experience a rollercoaster of emotions on Saturday morning.

To my little brother I have been your biggest admirer from day one. No one will be prouder come kick off Saturday. Bring it home mate. ??

Both Jacob and Joe will be watching from home due to their respective commitments with Westcliff and Yorkshire Carnegie whilst Mike will travel to Japan to meet up with wife Sally-Anne and George’s fiancé, Jess, before returning to his post as attacking coach at Leicester Tigers.

“The Westcliff guys wanted to me to go out there!” says Jacob.  “I had a long think about it and I spoke to Joe. My Dad is going out there and my Mum is out there as is George’s fiancé so we just said to each other, if no-one was there, we’d both go.

“George isn’t one of them who would be annoyed that his brothers weren’t coming. He knows we will be supporting him from afar and when he is back, we will be there for him. Me and Joe have got jobs to do here so we are very much focused on what we’re doing, but we will be there in spirit for him.

“He is incredibly excited for the final. It has just shocked me how incredibly grounded the England team are.

“George said they have only given themselves an opportunity and they are not getting carried away. They have got a job to do. They haven’t come here to finish second. It is great to hear George say that and hopefully they can bring the trophy home!”

From the very top of the rugby pyramid down to the National Leagues, the Ford name runs deep and Jacob will be hoping for success across the board this weekend, none more so than in Japan.