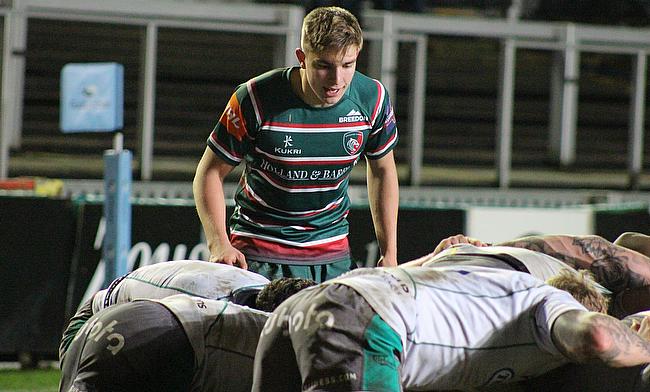 Eddie Jones urges World Rugby to cut out on incessant use of TMO
Josh Beaumont Column: England did well to hold their nerve - it sets them up nicely for Sydney
Danny Care, Lewis Ludlam start for England for decider against Australia
Nic White wants Australia to brace for physicality from England

Whilst many of the students at Oakham School signed off for another year on July 1st, one of their alumni was gearing up for the biggest test of his life.

Less than 24 hours after textbooks had been shelved and classroom doors had been locked, former pupil Jack van Poortvliet had made his debut for England against Australia.

Not only did the 21-year-old earn his first senior cap in Perth, but he also marked his international bow by scoring a try. Even though Eddie Jones's side suffered a 30-28 defeat in the opening match of the series, the cameo from the Leicester Tigers No.9 still caught the eye.

This was especially clear when the England boss named the scrum-half in the starting XV for their must-win second Test in Brisbane last week and Van Poortvliet didn't shy away from the big occasion after delivering an assured performance.

Those at Oakham School may not have thought the rise of their ex-student would have happened so quickly but since he departed the school three years ago, they have kept tabs on his progression and they believe Van Poortvliet’s rapid rise is down to his hard work as much as his natural ability.

We told you it was going to be a big day. 2 wins and 2 man of the match awards for these 2. @PoortvlietJack @hamishwatson7 https://t.co/V4nMEDj4ea

"I suppose at school, there is a thing where you say 'Crikey, there is a player who can play for England' but it doesn't really quite work that way," Oakham School's Director of Sport, Iain Simpson, tells TRU.

“Players have lots of potential and Jack had lots of potential, but he has got to where he has got to through working really, really hard and by staying very level-headed. I think that is the message for anybody and in Jack’s case, that will be hopefully down to a combination of what he has done through school and what he has done through Leicester Tigers."

"You instantly recognise when you have got a player with great potential," adds Director of Rugby Andy Rice, who heads up the first XV with Ian ‘Dosser’ Smith, father of Matt Smith, one of the coaches who works with Van Poortvliet at Leicester.

"There was talk about whether he was going to grow big enough and stuff like that! His Dad, Jeff, who I played with at Saracens, was a fairly big back-row forward so that was never going to be an issue! Seriously though, I think if you have got the talent, that sort of takes care of itself but Jack added hard work to that."

Van Poortvliet left Oakham School in 2019 and since then, the young scrum-half hasn’t looked back. After making his debut for Tigers aged 18, he won the U20 Six Nations Player of the Tournament last year before going on to display bucketloads of quality for a Leicester side who lifted the Premiership title in the season just gone.

It hasn’t all been plain sailing for the scrum-half, though. He was on the bench for the Premiership semi-final against Northampton Saints last month and missed out entirely on the squad for the final.

And despite his man-of-the-match performance last Saturday for England, Van Poortvliet has also been dropped to the bench for this weekend's third Test against Australia, with Danny Care returning to the starting XV.

Jones revealed the decision to omit the Leicester youngest was down to how referee Paul Williams, the man in the middle for the decider in Sydney, officiates the breakdown but despite this, Van Poortvliet’s former coaches know their ex-pupil will continue to soak up every second of his developing journey.

Ben Youngs recently confirmed his long-term future to Leicester Tigers, but two of his 'proteges' are eager to continue their challenge for the '9' shirt at Welford Road...#EmergingTalent https://t.co/eBIPF3gI2i pic.twitter.com/LppjnT1Dl5

“I think for Leicester and a certain extent for England, whether that is by luck more than judgement, they have done well in terms of managing Jack,” Rice adds. “He is still only 21 years old, but he has now clocked up 45 plus games for his club. Yes, a lot of those would have been possibly off the bench but again, he probably couldn't be at a better club with [Richard] Wigglesworth and [Ben] Youngs.

“Jack would have been very disappointed not to have been picked in the squad [for the Premiership final] but everything he does would have been hugely helped by going to Leicester and working with world-class players. Two weeks later though, he has played as he has for England so it is not all bad!

“That is why I think Jack's rise to the top is at exactly the right time for him. It hasn't come too early, it hasn't come too late. Almost pitch perfect because he is constantly learning.”

Not only have the environments at Leicester and England “hugely helped” Van Poortvliet, Rice’s own tutelage and attention to detail arguably set the No.9 on his way.

Rice, who joined Oakham School in 2016, was a scrum-half during his playing days with Saracens and he was keen to pass on any knowledge to a studious Van Poortvliet.

“For me, if you play half-back, you've got to be fairly confident in your ability to run a game and that is really, really important,” Rice explains. “I played scrum-half so we spent a fair amount of time together talking through the intricacies of the game and every game Jack plays, it is a bit more experience.

“We spent lots of time talking about man-management of the forwards and getting to know your forwards! Forwards will win games, but the half-backs must run the game. I suppose when you're playing half-back, it is a pressurised position in that regard. I know Jack has been told to work on the basics by Eddie Jones in terms of getting those right like his pass and his box-kick which are obviously very good, but you’ve also got to recognise the strengths of the players in your side and what is around you. That makes you a good half-back.

“What he has learnt from school, yes, would have given him a real head start, but now Leicester and England deserve the credit. There are huge subtleties to playing well and what delighted me most is the way a 21-year-old, on in effect his debut, managed that first half last week.”

Simpson, like Rice, was suitably chuffed with Van Poortvliet’s display in Brisbane and being impressed with the young talent was something both coaches witnessed on multiple occasions at Oakham.

Despite his monumental rise, Simpson admits Van Poortvliet was never ‘scoring five tries a game' or was a 'Billy Whizz' at school but one tournament in particular highlighted why the livewire scrum-half was destined to take his next steps in the sport.

“I think probably for me, watching him play at Rosslyn Park 7s in his Lower Sixth was actually where he had suddenly physically changed," says Simpson. "I think that learning his skills was important to his development but then when he suddenly caught up with himself physically, it was impressive.

“He never had any speed at all to him but in that environment, you thought; 'OK, wow' and he has kicked on massively. He is a 6ft scrum-half and he has got some pace as well!”

Simpson, who has been with Oakham School for 15 years, says whenever he can, Van Poortvliet will come back to his old stomping ground. Those at one of the top rugby schools in the country say whilst their former student exudes class on the pitch, the same applies away from the rugby field with his personable approach a permanent trait.

Van Poortvliet is one of the latest ‘Old Oakhamians’ to light up the professional game. A long list of names including Tom Croft, Lewis Moody, Alex Goode and Hamish Watson is something to be proud of, with Simpson revealing 18 past and present pupils have represented their country this season.

These achievements are highlighted by the school and offer a source of inspiration to the next emerging talents at Oakham.

Whilst England’s budding No.9 isn’t starting in Sydney on Saturday, his international boss admits he will have a “huge role finishing for us at the end” and has the skillset to do so.

The way Van Poortvliet has performed Down Under means he has put himself in a strong position to feature in the autumn with thoughts towards next year’s World Cup gathering pace.

But for now, those at Oakham School who are enjoying their summer breaks are bursting with pride that one of their own is seemingly passing his England test with flying colours.

“I messaged Jack last week,” adds Simpson. "I am sure he gets thousands of text messages but we are just very proud of him and very happy for him. It is just very exciting for everyone involved and whether he is playing or not, it is about enjoying every second of it.

“I messaged his father, Jeff, and his mum, Sarah, as well. It is nice to follow the family’s story because they are doing it for the first time too. They are living the dream!”

“I am absolutely delighted for him,” concludes Rice. “He could have played 10 years as a professional rugby player and not got picked. Jones has made the right decision. We are immensely proud to have helped him. You don't play for England or your country just like that so our job is to help nurture the talents of boys like Jack.

“If you read any article that he's done, Jack loves his rugby. He comes from a rugby playing family and I am sure he doesn't underestimate what he has achieved and he will want to not only become an international but become a very good international.”