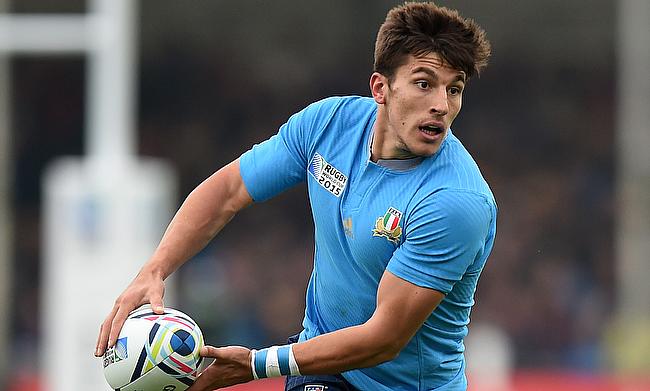 Jordan Larmour hat-trick steers Ireland to 54-7 win over Italy
Italy's Seb Negri: 'I do have to pinch myself because it is a dream come true'

Italy bounced back from their defeat to Ireland with a 28-17 hard-fought victory over Georgia at Stadio Artemio Franchi on Saturday.

This also Italy's second win this year after they defeated Japan 22-25 during the June series.

Italy had a promising start to the game when Tommaso Allan kicked a 10th minute penalty goal after Georgia were penalised for offside. The response from Georgia came in the 16th minute when Tamaz Mchedlidze gathered a long pass from Vasil Lobzhanidze to score the opening try that was improved by fullback Soso Matiashvili.

Mchedlidze's effort was cancelled when Michele Campagnaro crossed over in the 20th minute with Allan improving it as Italy maintained their three point lead.

Georgia suffered a setback when flanker Giorgi Tsutskeridze was sin-binned for an aerial tackle on Luca Sperandio and Italy stretched their lead to six minutes in the next 10 minutes with Allan's second penalty goal.

The pressure built by Italy eventually paid off when a pass from Tito Tebaldi found Mattia Bellini, who eventually went over the line as the teams headed into the break with a 18-7 scoreline.

The home side were quick to get off the block with their third try coming in the 43rd minute through Simone Ferrari to take the lead to 16 points but Matiashvili cut down the gap to 13 points with a penalty kick 10 minutes later.

Italy maintained their momentum when Allan gathered a well-timed pass from Braam Steyn to go over the line. Georgia had something to cheer in the 63rd minute when Tommaso Benvenuti was penalised for an early tackle and was yellow carded. A penalty try was awarded to Georgia but they could not quite push on from there as they succumbed to a 11 point defeat.

Italy will face Australia next in Padova while Georgia will host Samoa in Tbilisi with both the games scheduled on 17th November.