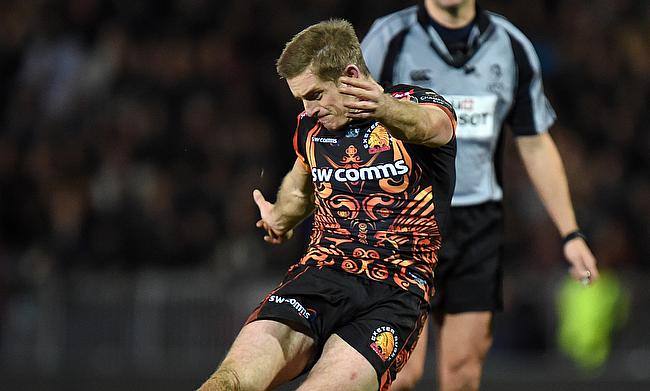 The French Top 14 pacesetters, who included 11 internationals, were no match for the Aviva Premiership's second placed team after the break at Sandy Park.

The last time the sides met in Devon, three years ago, the French side handed out a harsh lesson with a 46-12 mauling.

This time, the visitors - playing with a strong wind at the backs - led 14-10 at the break but were pegged back.

Eddie Jones was at Sandy Park for the first time since his appointment as England's head coach - but it was a shame for the hosts that Exeter centre Henry Slade was ruled out for four months after undergoing surgery on a broken leg and a damaged ankle.

Exeter were forced to make a late change as Sam Hill pulled up in the warm-up, so Nowell switched to centre, with Olly Woodburn promoted to the right wing and Michele Campagnaro added to the bench.

The hosts looked to have opened the scoring from a rolling maul but TMO Simon McDowell was unable to clearly see the ball ground, before Clermont's Hosea Gear breezed through under the posts for the opening try.

Scrum-half Morgan Parra added the extras but Gareth Steenson pulled three points back three minutes later from in front of the posts, only for Aurelien Rougerie to win t he race to the touchdown for the visitors' second try - with Parra's conversion hitting the upright and bouncing over.

The French international then saw his 51-metre penalty bounce the wrong way off the same upright, before Exeter's Thomas Waldrom crossed from close range and Steenson defied the wind to convert and complete the first-half scoring.

The second half comeback started when Waldrom powered over for a try which Steenson converted, before Woodburn's try-saving tackle denied Peceli Yato.

Exeter were reduced to 14 men when international referee John Lacey sent Phil Dollman to the sin-bin for 10 minutes - and Yato followed him for a high tackle on replacement Dave Lewis.

The home crowd were happy when Don Armand crossed and Steenson converted - and there was still time for Exeter to secure a try-scoring bonus point through lock Mitch Lees.

Steenson again converted to seal a magnificent victory for the Devon side ahead of next Sunday's return leg.