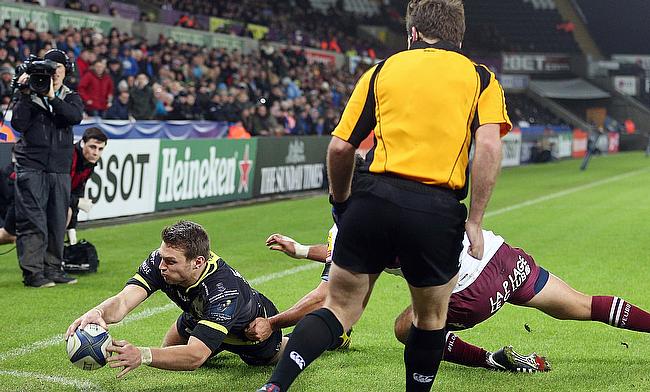 Dan Biggar scored all 19 points to keep Ospreys joint top of Pool Two in the European Champions Cup, but it was an unconvincing performance from the hosts.

The decisive moment arrived in the 44th minute, when French wing Jean-Baptiste Dubie was sent off for a high and dangerous challenge on Biggar. Bordeaux were 13-12 in front at that stage, having scored the game's first try through Felix le Bourhis.

Biggar went on to score a try, which he then converted, and finished with four penalties.

Pierre Bernard added the extras after Le Bourhis' score and kicked two penalties, with his replacement, Romain Lonca, slotting a penalty in the second half.

Bordeaux made 13 changes from last week's league win over Stade-Francais. They were able to include Australia prop Sekope Kepu, but his compatriot Adam Ashley-Cooper was absent along with France fly-half Lionel Beauxis.

Ospreys made a bright start and, when the visitors carelessly went offside, Biggar kicked an easy penalty to give his side a third-minute lead.

That score was nullified two minutes later, though, when Bernard responded with a more difficult shot.

Despite losing their lead, the hosts continued to have the better of the opening exchanges and had the first real opportunity to score the opening try.

From just inside his own half, Biggar intercepted a telegraphed Bernard pass to race away, but the outside half lacked the pace to go all the way. He was forced to kick ahead, which allowed Dubie to get back and clear.

Biggar soon made amends by kicking his second penalty to give the hosts a 6-3 advantage at the end of the first quarter.

As the game progressed, Bordeaux grew in confidence, earning more possession and territory, and they deservedly drew level when Bernard fired over an excellent long-range effort.

Ospreys suffered a big blow after 29 minutes when captain Jones was yellow-carded for dragging down a driving line-out, and the opposition made them pay immediately.

From the next line-out, the French side sucked in the home defence to leave Le Bourhis with a simple run-in for a try, which Bernard converted.

Back came Ospreys and two penalties from Biggar either side of the interval reduced the lead to a single point before Dubie was sent off.

Ospreys immediately benefitted to score their only try when Brendon Leonard sent Biggar over, with the outside half converting with a splendid touchline kick.

The home team seemed certain winners, given their numerical advantage, but the visitors would not lie down and they dominated the next 10 minutes.

Replacement Lonca kicked a penalty to reward their spirited endeavours, but he missed badly with another straightforward attempt which would have drawn his side level.

With four minutes remaining, French prop Jean-Baptiste Poux was yellow-carded for dragging down a driving line-out, but their 13 men held on for a thoroughly deserved bonus point.