Humble, honest and hardworking - The three Hs that have served Scotland captain McInally so well 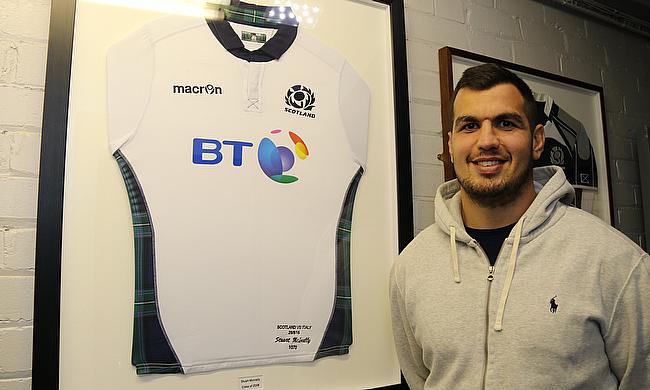 Stuart McInally - this week named Scotland captain for the World Cup - had just turned 18 when he made the trip down south with Watsonians on a pre-season tour in 2008.

Then, he was a wet behind the ears back-row player who had finished school at George Watson’s College in Edinburgh.

Such was his talents on the rugby field and his calm, composed nature off it that he was already very much on Edinburgh Rugby and the Scotland under-20s team’s radar.

Whilst getting used to life as an apprentice with Edinburgh he would be playing his club rugby with his local club Watsonians.

Moving into a senior dressing room for the first time can be daunting for any young player, but the Watsonians first XV squad at the time had heard all about McInally’s potential.

Stuart McInally speaks about the honour of being named captain of the Scotland squad heading to #RWC2019.

Find out what the role means to him and how he fits into the wider leadership group as the squad make their final preparations for Japan.https://t.co/d7B7QtcEMm

And when he joined the group in August 11 years ago, he fitted in seamlessly and was soon one of the boys.

“At that time everyone in Scottish rugby circles had started to hear about Stuart - or Rambo as we came to know him - because he had been very impressive in the George Watson’s first XV as the captain,” then Watsonians first XV head coach Bruce Aitchison told TRU.

“I was looking forward to working with him and straight away I found him to be humble, honest and hardworking and a joy to have around the squad.

“Fast forward 11 years and the great thing for me is that if you bump into Stuart he is still that same character, there is certainly no ego about this guy, and that is why if you ask the majority of people in Scottish rugby what they feel about him being World Cup captain they will be so chuffed for him.

“He is a great role model. Going back some 11 years, he slotted into our back-row at Watsonians well and he had the respect of those around him instantly despite his tender years because of his work ethic and ball carrying abilities.

“I remember in one game back then Fraser Brown [who is also going to the  World Cup with Scotland] and Rambo both went in for a tackle on Melrose’s John Dalziel [now Glasgow Warriors forwards coach].

“Those that remember John playing know that he was a powerful man and the two youngsters were so committed to the tackle and the team that they clashed heads and both took sore ones.

“It epitomised the attitude that they both have and to see them in the Scotland squad together now is excellent.

“Seeing Rambo as captain gives me extra pride and, knowing his character as I do, I know he will do a fine job in Japan.”

The journey has been “tough”, but so worth it

It was at the Scotland squad’s send-off dinner before the 2015 World Cup that McInally, then with just two caps to his name and still learning the position of hooker following his move from the back-row, realised something was not right.

A neck injury had flared up and it meant that he would not be able to travel to the showpiece event under then head coach Vern Cotter.

“The journey since then has been tough,” McInally, now 29 and with 29 caps, stated.

“I remember when I found out I was missing the 2015 World Cup, I said to myself that I was going to use the hurt to come back stronger.

“I was determined to come back with a stronger neck than I’d ever had before because I think I took that for granted, how strong your neck needs to be to play in the front-row in international rugby.

“After missing the 2015 tournament I played all of the 2016 Six Nations because I think Fraser [Brown] was injured so it was between myself and Fordie [Ross Ford].

“Then I didn’t play at all the following year because I was struggling to even get in the Edinburgh team, so that was a really tough year for me, feeling like I was ready to kick on, but I couldn’t.

“Then when Richard [Cockerill, head coach since 2017] came into Edinburgh and Ross [Ford] had an injury, he just believed in me and gave me a good run of games.

“Up to that point I hadn’t started more than one game in a row without having to go back to the bench, so he just gave me loads of game time and that’s when I started managing to play for Scotland as well.”

McInally is the skipper ahead of Scotland’s pool opener with Ireland on September 22, but he certainly will not be leading alone in Asia.

“Gregor [Townsend, the Scotland head coach] told me last week that he wanted me to be captain in Japan,” said McInally.

“I just smiled straight away. I was desperate to do it. I was also aware of how much leadership there is around me.

“Having so many leaders does make me more relaxed, knowing that I’ve got Greig [Laidlaw] and John [Barclay] there for example.

To be injured just before World Cup in 2015 must of been a big blow to this guy and today to be named captain of the side just shows how committed and professional this man is, I have seen this first hand. On ya @McInallyStuart also well done to all the other lads involved.

“Greig speaks so well about everything because of his experience while John is big on defence, between them they have almost 150 caps so I’d be silly not to tap into that experience and it certainly makes me more relaxed in my role as captain.

“It’s a really proud moment for me and 2015 does seem like a long time ago now. People keep bringing it up about the last World Cup and obviously it was disappointing, but this time around I feel like a different player.

“I was very much just coming towards what felt like the end of my transition from back-row to hooker then.

“I think that if I’d gone to that World Cup I wouldn’t have been as comfortable as I am now standing on the sideline throwing the ball in or scrummaging.

“Experience has helped me loads and this time around I feel more relaxed and personally in a good place to go to Japan and play some good rugby.”