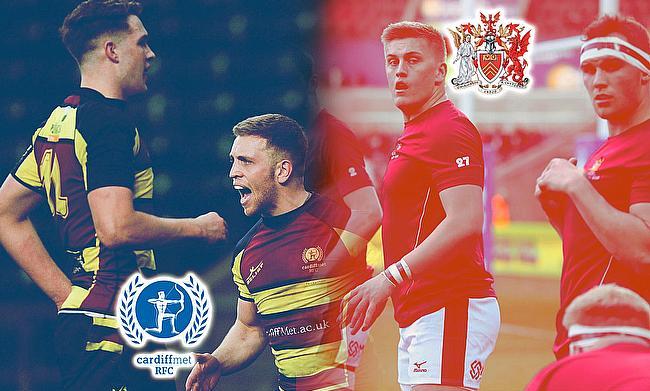 Durham and Beckett excel against current champions
Derby day was always a highlight for Dombrandt
Beckett up to third, Hartpury thump Northumbria and Durham bounce back
Durham tighten grip at the top after defeating Exeter

Derby day is a special occasion

They are great to be a part of, but it is also great to have the support of the Cardiff Blues for both universities. The atmosphere is special and the fact that the fixture is before Christmas again is fantastic. Last year, I think there was a couple of thousand there and both games were really close. The less said about the second game the better! I think they need a TMO there in future! I have been giving Danny Milton [Cardiff Met Director of Rugby] a lot of stick this week!

It is brilliant and it is exactly what Cardiff and Cardiff Met need in regards to a ‘Varsity style’ game. There is obviously a very historic Varsity between Cardiff Uni and Swansea. I know Cardiff Met are still doing their Varsity with Bath, but it is not quite the same is it?! This has more of a spice in terms of who is going to be the better team within the city and over the last year with the two close fixtures, it has all the makings to continue being a big fixture for both teams.

‘It can be quite a toxic atmosphere!’

I think it is the closest thing to a football atmosphere you’ll ever see when it comes to university rugby. It is quite a toxic atmosphere. From a player perspective, I can imagine it is fantastic to play in front of. It really does make a lot of the guys involved who may be carrying a bit of a niggle going into this week forget about that niggle because you are playing in front of your peers and supporters so it is becoming something quite special.

That’s it - we are officially sold out for tomorrow’s @BUCSSuperRugby clash with @cardiffmetrfc ????????
Get in early to @ArmsParkCardiff to cheers the boys on! #TeamCardiff pic.twitter.com/3kwCqoTkUb

I spent five brilliant years in Cardiff Uni and three years at Cardiff Met as a student. I love the club at Cardiff Uni and I like what the university stands for. The build up to the game is something quite different. It is a little bit different to the Varsity build-up because from the student perspective, it is how early does the bar open and how long can you hold on for dear life drinking for a 7pm kick-off! It is on the same wavelength for bragging rights, though! I think we won four of their last five against Swansea and three on the spin and at that time, that was the first time it had ever happened.

For me, the feeling was more anxiety and a bit of excitement! You know what it is like in BUCS Super Rugby and this isn’t a loose phrase; anyone can beat anyone on their day. It is a bonkers league, but I think that is the reason it has been so successful.

In terms of BUCS Super Rugby as a whole, we have seen a few huge slides in direction in regards to performances and results. I think that is the whole point of three-year cycles and how things differ from year to year with some universities so it has been really interesting to watch actually.

If I am being perfectly honest, you have to look at how people recruit. From a Cardiff University perspective, unless you get the grades, there is no flexibility. I like that as a coach because what you get is a certain calibre of man or women. You are getting a person who has worked hard and is intelligent even before they have put their rugby boots on.

If you look at other universities, and I don’t think this will be a shock to many, but if you play rugby, that can get you in. If you look at the league this season, Durham have recruited heavily for post-grads so they have got an old team and Leeds Beckett have got similar traits so naturally, you are going to have more experienced players coming into the programme.

Swansea University have also recruited very well because of the funding and Cardiff Met have always had good recruitment because it is such a hotbed for development just like Hartpury.

This is how the league has developed and I think that is how it will continue. It has become a professional template off the pitch.

A lot of teams are now recruiting and looking at their next crop of players. That will always have a financial arm to it. ‘How can I persuade this guy or girl to come here?’ I’ll offer them X,Y or Z. You then have to think a bit outside the box.

It is then all about the USPs. For example, Swansea is a good university and has a big link with the Ospreys and it has a huge link with a Welsh Premiership team because Hugo Gustafson is the head coach of both. That is just one example and every university have that USP and they use that to their benefit. That is how it is involving and that means university rugby is going to strengthen. I can’t see that being a bad thing at all across the board and you can see why the RFU are backing it in. This league will be an absolute monster in a few years time.

Cardiff Uni are still moving in the right direction

I think they have transitioned well considering the turnover of players so I know Alan [Flowers], David Larkin and the guys are doing a brilliant job there. It is really good to see what they have got there and considering where they are in the league as well, they have had actually had a better start then we did last year.

I think a lot of scorelines in the league can be judged by looking at it and saying ‘they got smashed up there.’ Swansea up at Cardiff Met last week was an example of that. I think you need to delve into it a bit more. I think people do target certain games. During my time at Cardiff University, we did use to roll out the younger players on the road to give them experience. I know the coaching at Cardiff University is a high standard so I can the results from a different perspective.

It is a home game so you’d like to think it is a game that both teams are targeting. It would be brilliant to think that it is something Cardiff University can use as a platform before they break for Christmas, but having spoken to Al, I just think they are looking for a performance and that performance, like anything, will hopefully be good enough to get them across the line.

They need to play the game and not the occasion. The first game we had at the Arms Park pre-Christmas last year, we picked a very different team to the one we picked in the second game.

Superb @BUCSsuperrugby contest at the Arms Park tonight! Great to see a couple of our academy boys out there too! Standard of play is credit to both sides pic.twitter.com/iEFQr32XMP

t cope well in the first 30 minutes because it is huge. Hopefully both teams can make a good account of themselves and I really hope it is a good spectacle for Welsh teams in the league and we can show that Cardiff can throw a party in terms of the game and the occasion with Cardiff Blues’ help.