How England will look under the new coaching team 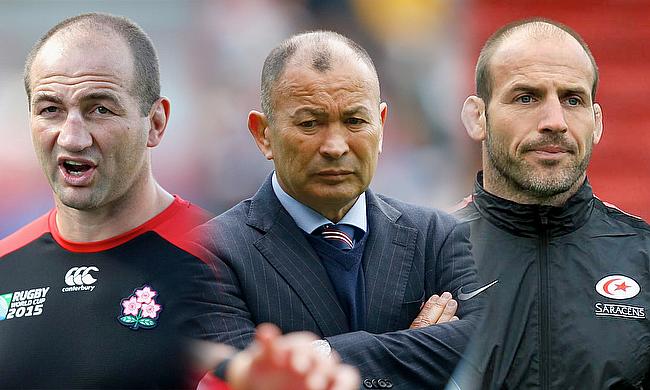 Eddie Jones’ new coaching team has emerged rapidly over the last couple of weeks and now gives us a very real idea of how England will look under the Australian.

Following hot in the footsteps of the departures of Graham Rowntree, Andy Farrell and Mike Catt from their roles as England’s assistant coaches, Steve Borthwick was announced as England’s new forward coach. A legal battle with Bristol RFC, Borthwick’s former employers, was avoided thanks to a heavy compensation package being offered by the Rugby Football Union, but it was an unedifying episode for the governing body of English rugby.

Since then, Saracens’ Paul Gustard has been confirmed as England’s new defence coach and though Northampton’s Alex King’s arrival as backs and skills coach hasn’t yet been confirmed, it’s believed just to be a matter of time until it is.

So, how can we expect England to play under the likely coaching quartet of Jones, Borthwick, Gustard and King?

Starting in the pack, it’s needless to say that England will look to their set-piece as a potent attacking weapon. Jones has already spoken of his desire to play to England’s strengths in that area, whilst Borthwick is a coach who will undoubtedly push for England to be one of the very best in the world at the lineout.

Righting England’s ailing Rugby World Cup scrum should be priority number one, however, and could lead to Mako Vunipola emerging as England’s starting loosehead. The prop has been in excellent form for Saracens and Borthwick will know him well from his time at the club. Hooker Jamie George has been knocking on Jones’ door with incredible gusto this season, but with Dylan Hartley rumoured to be taking on the England captaincy, the Saracen may have to make do with a place on the bench.

Finding a man to run England’s lineout should be priority number two. Geoff Parling, now 32, may be out of the equation for the next cycle, leaving Tom Wood and George Kruis as the only proven lineout callers in England’s current ranks. The formidable lineout ability of Courtney Lawes and Maro Itoje make the duo a potentially effective combination, especially if Lawes can gain any insights into running a successful set-piece from his new club teammate, Victor Matfield.

Joe Launchbury, who had been mooted as a potential England captain before the Hartley rumours emerged, is another player in the mix and though not quite as impactful at the set-piece as Lawes, Itoje or Kruis, brings plenty of other qualities around the park.

Moving on to the back row and Jones is a coach who tends towards an out-and-out fetcher in his seven jerseys. The tipped trio, at time of writing, are Brendon O’Connor, Will Fraser and Matt Kvesic, but Harlequins’ Luke Wallace is having a fantastic season and should be in the conversation as well.

Wood could be retained at six, especially if England opt for a lock pairing without a proven lineout caller, but should face competition from Chris Robshaw and Jack Clifford. Number eight is a position which should take care of itself with Billy Vunipola impressing for Saracens and Nathan Hughes qualifying for England in the summer. Sale’s Josh Beaumont could be the unluckiest man in England given the competition he faces to get into the England squad.

With Jones clearly looking to bring in Saracens’ ‘Wolf Pack’ defensive mentality with the addition of Gustard to his coaching team, expect the North Londoners to feature heavily in England’s pack. George, Kruis, Itoje and the Vunipola brothers are all candidates to feature for England when they take on Scotland on February 7th.

In the back line, Jones’ most notable trait is that he likes two genuine distributors at fly-half and inside centre. With Australia, Jones had Stephen Larkham at 10 and then one of Elton Flatley or Matt Giteau at 12, whilst with Japan at the RWC, he again opted for two fly-halves, playing Kosei Ono and Harumichi Tatekawa.

Replicating this with England shouldn’t be a problem, especially given the number of talented young fly-halves currently at Jones’ disposal. Owen Farrell is in the form of his life right now and looks a good bet to hold down the 10 jersey during the Six Nations, especially with George Ford struggling to provide the incision he did last season. Henry Slade had been mooted as the perfect second distributor in the back line but his broken leg will rule him out of the Six Nations.

The door has been flung open to all of England’s creative inside centres, but it’s an area where they’re are not blessed with a ton of talent. Kyle Eastmond is the standout candidate as of right now, but Premiership clubs are littered with strong carrying 12s, rather than creative sparks. Like the All Blacks, many Premiership clubs opt to have a player capable of being a second distributor, but tend to play them at outside centre (Elliot Daly, Jonathan Joseph, Sam James, Henry Trinder etc) and have a player capable of straightening the line at inside centre.

Whether Jones looks to push a fly-half out to 12, bring an outside centre in a spot, opt for Eastmond or trust a more direct inside centre, such as Luther Burrell or Sam Hill, remains to be seen. The make-ups of Jones’ 10-12-13 combinations tend to be distributor-distributor-direct runner, but the Australian is also a pragmatist and may be willing to adjust his plans until Slade returns from injury or Ford can re-find his form.

With Jones expected to be in charge of England’s attacking game plan and King’s remit to be more skills-based, it’s more than likely that Jones’ tendencies will dictate back line section more so than King’s.

Combining Borthwick’s set-piece knowhow, Gustard’s ‘Wolf Pack’ defence and King’s nuances with the back line, all under the umbrella of Jones’ progressive and innovative game plans, England’s new coaching team seems, at least on paper, to be a winning combination.