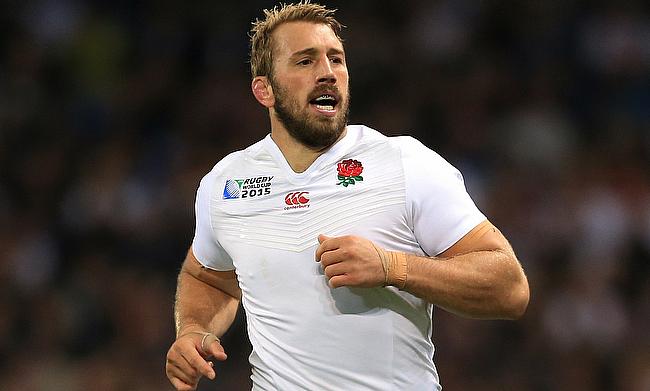 Chris Robshaw will offer his support to his successor if relieved of the England captaincy as he concentrates on securing his place in Eddie Jones' team.

The Harlequins flanker is expected to be stripped of the leadership duties for the forthcoming RBS 6 Nations with Dylan Hartley favourite to be installed as skipper, providing he recovers from the concussion that has kept him out since November.

Robshaw is not Jones' preferred openside, instead the number six jersey is his most likely home and the 29-year-old knows he must focus on ensuring his ongoing presence in England's back row.

"I'm not sure what will happen with the captaincy, that's down to Eddie. If Eddie continues with me as captain I'd be hugely honoured," Robshaw said.

"If he decides to go to someone else then I'd respect that decision and fully back the person who comes in.

"That has to be the focus, to make sure I'm playing. Yes the World Cup didn't go according to plan, but it's still a very exciting group of players that England have.

"We didn't perform as well as could have, but there's a huge amount of potential there."

Robshaw met with Jones, Stuart Lancaster's successor as England head coach, on December 6 but refuses to reveal any details of their conversation.

"Eddie is a good guy. We had a good chat. There were two people in the room and what was said stays between us," said Robshaw, who will start Sunday's Aviva Premiership clash with Gloucester at Twickenham.

"He's a good man and hopefully he has some exciting ideas for English rugby."

England failed to advance from the group stage of a World Cup for the first time when successive defeats to Wales and Australia dumped them out of this autumn's tournament.

Robshaw has carried the burden of that failure more than most after his leadership was heavily criticised in the wake of his decision against Wales to decline a match-drawing shot at the posts in favour of an attacking line-out.

Had fly-half Owen Farrell landed the kick and the game been drawn, England would have reached the quarter-finals.

Robshaw, speaking for the first time since the World Cup, returned to his club Harlequins to begin the healing process.

"I was hugely disappointed initially, it's one of those things that will stay with you," Robshaw said.

"I had a lull when I was a little annoyed with things, but now I'm back in a good place.

"Myself and a lot of the other guys, we had our mope and dip in confidence but now we're back and enjoying it.

"Everyone at Quins has been fantastic looking after me, whether that being giving me a bit of space after those first couple of weeks or building my confidence again and getting me back out there.

"All the England players are playing well now. They potentially had a dip but now everyone is firing on all cylinders. The English game is in a strong position."