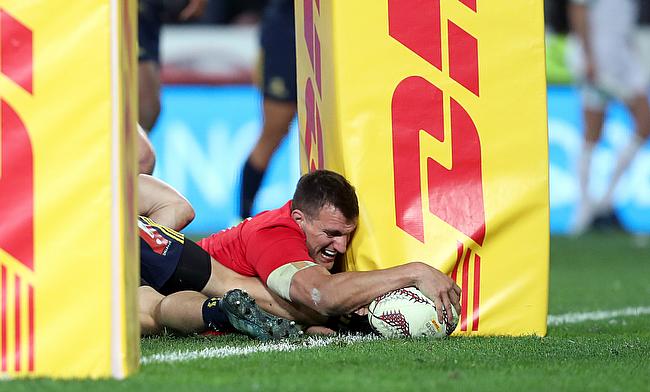 Sam Warburton touched down but the Lions lost in Dunedin
©PA

Marty Banks scored the decisive penalty in the 73rd minute as Highlanders edged out British and Irish Lions in a thrilling 23-22 win in the tour game at Forsyth Barr Stadium on Tuesday.

Lions had their opportunity to register their second win of the tour but Elliot Daly's last-gasp penalty in the 78th minute fell agonisingly short.

Skipper Sam Warburton returned to the line-up in a bid to prove his fitness after the ankle strain that he sustained in the first game against New Zealand Provincial Barbarians.

The 2015 Super Rugby champions scored an early penalty in the fourth minute through fly-half Lima Sopoaga but Dan Biggar, who was preferred at number 10 this game responded back with a penalty of his own 11 minutes later to level the scores.

Waisake Naholo crossed over in the 25th minute with Sopoaga adding the conversion as Highlanders claimed a seven point lead but their efforts were negated when Jonathan Joseph breached the defence of the home side after an offload from Biggar and the scores were levelled 10-10 at half time.

Scotland international Tommy Seymour intercepted a pass from Sopoaga as he went past the line to get Lions into lead for the first time in the game but the gap came down to two points after the Highlanders' number 10 kicked his second penalty, seven minutes later.

Warburton, who missed six weeks due to knee injury announced his arrival with a 52nd minute try and Lions looked comfortable with a 13-22 after the conversion from Biggar. However, once again Highlanders were up to the task after Liam Coltman strolled past the post in the 59th minute and Banks added the extras.

Lions had a slender two point lead heading into the final 10 minute and this is when Banks kicked the crucial three pointer to bring Highlanders to one point lead and it remained intact at the end of the game after Daly's penalty fell short.