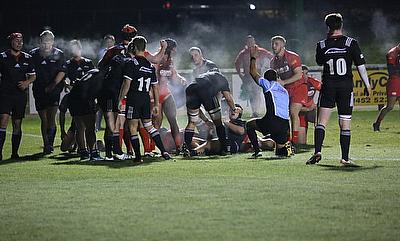 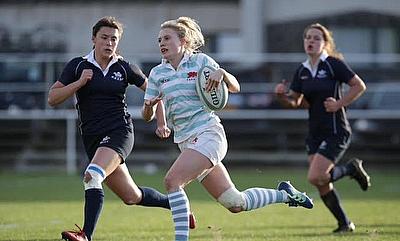 Hartpury College ran in 11 tries as they eased past Northumbria to move top of BUCS Super Rugby and they also maintained their 100 per cent start to the season.

College secured their fourth successive win which leaves them clear at the top of Super Rugby and they are now the only side in the division who are unbeaten.

Bath’s perfect start came to an end as they lost to a determined Durham side while elsewhere, Loughborough made it two wins in five days thanks to a dramatic late victory against Cardiff Met and Leeds Beckett still remain without a win following defeat to current BUCS champions Exeter.

In other news across BUCS, there were a few shocks this week. Bristol and Leeds Beckett 3rds saw their unbeaten starts come to an end while in the women’s competition, both of last year’s finalists fell to defeats. There was better news for the likes of Edinburgh, Leicester, Liverpool and Coventry as their Men’s 1st XV’s continued their impressive starts to the campaign.

Hartpury College went top of the inaugural BUCS Super Rugby League as they scored 11 tries to demolish Northumbria in Gloucester.

College, who maintained their 100 per cent start to the season, were almost out of sight by half-time as Rhys Tudor, Alfie Barron, Jack Sharpley, Henry Harper and Harry Cochrane all crossed for the hosts.

Two penalties from the boot of James Christie was the only points Northumbria could muster and that’s how it stayed for the visitors as Hartpury moved through the gears in the second period.

Tudor completed a fine hat-trick while Tom Pashley, Craig Bachurzewski, Maliq Holden and Jamie Forrester also touched down for College who are now at the summit of Super Rugby as they bid to repeat their triumphs of 2012 and 2014.

A last-minute conversion from Will Kaye gave Loughborough a dramatic win over Cardiff Met to move them up to second in Super Rugby.

The visitors led 15-0 at the break thanks to two tries scored by Rory Whane and Alex Dombrandt as well as penalty from full-back Ollie Glass.

Thomas Morgan extended Cardiff Met’s lead from the tee early in the second-half, before Richie Lewis went over for Loughborough’s first try of the match on 48 minutes.

However, an unconverted Luke Northmore try put the away side back in control and a second penalty from Morgan saw them establish a 19 point lead with just over 20 minutes of the game remaining.

Just after the hour, the comeback began for Loughborough. Joe Doyle went over and on 70 minutes Jack Stapley touched down under the posts as the home side started to break down a tiring Cardiff Met side.

With the score now at 26-21, Loughborough were relentless in attack and hammered away at the Cardiff Met defence. Chris Davey’s men were standing firm until deep into the red zone, Loughborough barged their way over to tie things up.

Kaye had converted the previous three tries for the home side and he kept his nerve when it mattered most to seal Loughborough’s second win in five days after they beat Northumbria 29-24 on Friday night.

Loughborough forwards coach George Chuter: 'It was a really good display of character at the end there, Cardiff Met are probably very disappointed as they were probably the better team for the first 65 minutes of the game but you have to play for eighty minutes.

"The guys stuck to their guns and kept working and there were some really good impact performances from bench players. It showed a lot of mental resolve to score the try at the end and it was also a fantastic conversion by Will Kaye to win the game. We will have to do a lot better and there’s still work to do but its nice to take the points."

Durham clinched a tense victory over Bath at The Rec to extend their winning streak to three matches while Bath’s 100 per cent start to the season came to an end.

A try from Tom McClean had the visitors 7-0 ahead at the break before Nathan Holmes added to his conversion by slotting a penalty early in the second-half to extend Durham’s advantage.

Tom Doughty then smashed his way over after a driving lineout for a converted try as Bath reduced the lead to three points, but it was a moment of sheer brilliance from Durham’s Rob Stevenson that won the game.

The winger produced a wonderful solo effort to dive over in the corner to give the away side some breathing space, but it was then all Bath in the final 10 minutes of this pulsating encounter.

Wave after wave of pressure was thrown at the Durham defence, but they kept resisting. Bath settled for a penalty with just minutes on the clock remaining which the ever reliable Hugo Stiles slotted over, but Durham were able hold out to secure an impressive victory.

Exeter secured their second win in a row in BUCS Super Rugby thanks to a clinical victory over Leeds Beckett.

Tries from Jack Owlett and James McRae as well as a penalty from Ted Landray gave the visitors a 15-5 interval lead, with Tom Williams replying for Leeds.

McRae dotted down his second score of the afternoon four minutes after the interval before Exeter showed strong defence as they batted away Beckett pressure heading into the final quarter of this match.

The Green and Whites then sealed victory eight minutes from time as Chris Swash dived over for the bonus point while Louis Brown’s late score for the home side was merely a consolation as they remain winless in Super Rugby.

In North A, the University of Nottingham remain top of the table but they have now suffered back to back defeats 100  as they were beaten 36-21 by a Leeds side gathering momentum in this division.

Loughborough University’s 2nd XV suffered their second defeat in as many weeks as they were beaten by Newcastle who have now secured back to back victories. Elsewhere, Bishop Burton College also made it two successive wins thanks to a 24-19 triumph over Durham 2nds while Nottingham Trent picked up their first bonus-point win of the season beating Birmingham 32-22 – who have lost all five of their matches.

Elsewhere, the University of South Wales had the bragging rights in the derby match as they sealed their second victory of the season thanks to a 38-14 victory over rivals Swansea.

League leaders the University of Edinburgh were back in action in North B this week and returned with a win as they battled to a 28-17 victory against Strathclyde to seal their fourth straight triumph and maintain their 100 per cent start to the season. Elsewhere, second placed Durham 3rds made it three wins on the spin as they comfortably beat Manchester 36-14.

In South B, Exeter 3rds made it four wins from a possible four as the edged out Cardiff Met 27-22 to stay top of the division. The University of Southampton fell to their second defeat in a row as St Mary’s beat them 24-19 away from home while Bristol 2nds picked up their maiden victory of the campaign away at Portsmouth as they won 35-10.

After the majority of the Northern 1A sides were in cup action last week, they returned to league duty this Wednesday and leaders the University of Sheffield had their 100 per cent record ended by Leeds Beckett 2nds. Their 43-38 win takes Beckett to within just two points of the Steel City side after four matches.

Elsewhere, Newcastle 2nds clinched their first win of the season as they beat fellow north-east outfit Durham 4s 22-17 while the University of Hull thrashed Lancaster 55-0 to seal their second win of the campaign in style.

The University of Liverpool made it four wins on the bounce thanks to a cracking win over Manchester Met whose 100 per cent start to the second came to an abrupt in this top of the table clash in Northern 2A. Other fixtures in the division saw, UCLan suffer their third defeat of the campaign as they were beaten 40-8 by Keele while the University of Bangor secured their first win of the term with a 33-17 victory over Chester.

Leeds Beckett 3rds’ great start to the season suffered a blip on Wednesday afternoon as their unbeaten record came to an end. The Yorkshire side were beaten 41-17 by Northumbria 2nds in Northern 2B. That result meant that Newcastle 2nds could have closed the gap at the top, but they failed to do so as Sheffield Hallam secured a narrow 22-21 victory over the north-east side. In the final game in this division, the University of York are now three points behind Leeds Beckett following a 24-15 triumph over Leeds 2nds.

The top two Midlands divisions were back in action this following cup commitments last week and Midlands 1A leaders Leicester picked up from where they left off from in the league as they maintained their 100 per cent start to the season with a 25-17 victory over Warwick. Elsewhere, Nottingham Trent 2nds lost out 23-22 against Harper Adams, who clinched their second win of the term.

In Midlands 2A, table toppers the University of Coventry made it four wins from four and did so in style as they thrashed Harper Adams 2nds 62-0. Second placed Nottingham 4ths also maintained they decent start to the season as they edged out Warwick 2nds 15-12 while Nottingham Trent 3rds against Birmingham 3rds was cancelled.

In the Women’s BUCS competition, last year’s finalists Northumbria suffered their first defeat of the season in Premier North A as a late Durham try secured them a 20-18 victory over their north-east rivals which sees both sides level on points after four rounds of rugby. Elsewhere, Edinburgh beat Loughborough 36-11 away from home and Newcastle secured their first win of the season beating Leeds Beckett 49-40.

In Premier South A, reigning champions Cardiff Met were stunned as they were beaten 46-7 by a spirited Gloucestershire side in Wales while Exeter moved to the top of the division thanks to a comfortable 50-14 win over Bristol. In the other fixture in this league, Cambridge got the bragging right in their pre-Varsity match as they beat Oxford 22-0 at Grange Road thanks to a brace from Lara Gibson and tries by Laura Suggitt and  Alice Middleton.