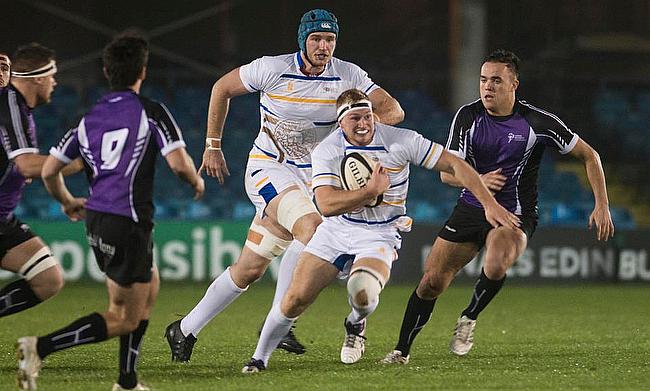 The University of Bath secured their third win of the season in Super Rugby to move top of the table following a narrow victory against Leeds Beckett at The Rec.

Aaron James’ side maintained their 100 per cent start to the season and are now at the summit of this division on points difference ahead of Hartpury College. Elsewhere in the league, Durham secured their second win of the season with victory over Cardiff Met while Northumbria host Loughborough tomorrow night at Kingston Park.

In other news across our featured BUCS leagues, Nottingham, Leeds and Loughborough 2nds saw their unbeaten records come to an end while the likes Bristol, Liverpool and Manchester Met continued their perfect starts to the campaign.

Elsewhere, last year’s finalists in the Women’s competition – Cardiff Met and Northumbria – are both currently top of their respective divisions following victories and it was also the first round of cup action as the Men’s BUCS Trophy began this week.

The University of Bath celebrated their 50th birthday in style as the men’s 1st XV maintained their unbeaten start to the season with victory over Leeds Beckett.

A close range try from Leeds captain Josh Longson was cancelled out by a Charlie Dunbar score which saw the sides all square at half-time.

Alex Wood’s try gave Bath the lead after the break following a Hugo Stiles penalty before Jonny Sykes’ score for Leeds set-up a grandstand finish as he darted over nine minutes from the end.

However, his try was not enough as Bath held on to the delight of the 5,000 strong crowd at The Rec.

Aaron James, Head of Rugby at the University of Bath:  “The boys worked hard for each other and their discipline was outstanding. It’s been a great start to the season and we will celebrate tonight but then tomorrow we start looking ahead to our next match. Every game in this league is very, very hard.

Bath Captain Will Britton: “Having such a big crowd turn out made a massive difference for us. Playing in front of your mates in a ground like this, it doesn’t really get much better to be honest.”

Durham made it back to back wins in Super Rugby as they came from behind to beat Cardiff Met.

Full of confidence after their maiden win last week against Leeds Beckett, Durham once again put in an excellent display on home soil.

Nathan Holmes, Rob Stevenson and Joe Duffy all touched down for the hosts while Holmes kicked 11 points from the tee.

Cardiff Met kept pace throughout this match as Alex Dombrandt and another score had actually given the visitors the lead at half-time, with Dombrandt crossing for his fourth try of the season late on.

The defeat in the north-east is Cardiff’s second in four Super Rugby matches this season and they now sit two points behind Durham in the table.

In North A, the University of Nottingham remain top of the table but their 100 per cent start to the season came to an end on Wednesday as they were beaten 17-15 by city rivals Nottingham Trent. Loughborough University’s 2nd XV failed to take advantage of this as they too lost their unbeaten start to the season as they fell to a 49-22 defeat against Durham 2nds.

Elsewhere, Leeds University also suffered their first loss of the campaign as Bishop Burton College beat them 38-23 while Newcastle University picked up their second win of the term thanks to a 26-20 win against Birmingham – who have lost all four of their matches thus far.

The University of Bristol maintained their 100 per cent start to the season in South A as they eased to a 42-19 victory over Swansea. Bristol now have a six point lead at the top of this division, but both Cardiff University and Hartpury College 2nds continue to hunt them down. Cardiff were awarded a victory over King’s College who were unable to field a team on Wednesday while Hartpury comfortably beat USW 45-3 in Gloucestershire. Elsewhere, the University of the West of England secured their second win of the term beating Exeter 2nds 32-19.

League leaders the University of Edinburgh were not in action in North B this week, but the two sides directly below them were. The University of St Andrews made it three wins on the bounce as they beat a winless Loughborough 3rds 50-12 while Durham 3rds sealed back to back victories thanks to a 45-5 win away at bottom of the table Worcester.

In South B, there was just one fixture this week and that saw Exeter 3rds make it two wins from two as the beat the University of Southampton 33-8.

The University of Liverpool made it three wins on the spin thanks to a 78-0 thrashing of Chester who have now shipped 115 points over the last two weeks in Northern 2A. Elsewhere, Manchester Met also continued their 100 per cent start to the campaign due to a 30-17 victory over Keele.

Leeds Beckett 3rds remain top of Northern 2B following their third straight win. The Yorkshire side beat Sheffield Hallam 34-23 to move six points clear at the summit. Second placed Newcastle 3rds won 32-24 against Leeds 2nds while the University of York clinched their first win of the season thanks to a 28-17 win over Northumbria 2nds.

In the Women’s BUCS competition, last year’s finalists Northumbria have moved top of Premier North A after edging out Loughborough 32-19 while Durham made it two wins out of two following a 44-8 victory on the road against Leeds Beckett. Elsewhere, Northumbria v Edinburgh has been rescheduled.

In Premier South A, Cardiff Met are looking like an unstoppable force once again as they thumped Oxford 82-6 with Sophie Waugh and Jazz Boatswain being the stand out performers for the current champions. Elsewhere, Gloucestershire picked up their first victory of the season with a 38-25 win away at Bristol while Exeter thrashed Cambridge 92-0.

The first round of the Men’s BUCS Trophy fixtures took place this week and Northern 1A league leaders the University of Sheffield are into the second round following a 15-10 victory over Dundee up in Scotland.

Fellow Northern 1A side Durham 4ths also advanced into the next round as they beat Heriot-Watt University while the University of Hull won 46-32 against Nottingham 2nds. Elsewhere, Newcastle 2nds beat the University of Sterling 36-12 and Lancaster lost 36-7 to Midlands 1A side the University of Leicester who have won all four games of their season thus far.

Along with Leicester, representing Midlands 1A were Nottingham Trent 2nds and the University of Bedfordshire who were paired together in the first round of the cup. Trent currently sit second in the table while Bedford lie bottom without a win to their name this campaign and it was Trent that prevailed on Wednesday as they won 31-6 at Polhill Sports Fields.