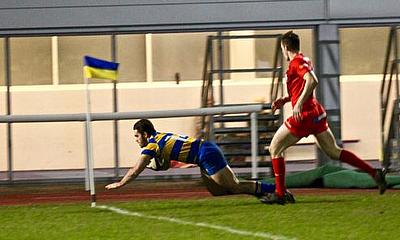 Mark Lilley says the University of Bath are confident of causing an upset against Hartpury College tonight in the semi-finals of the BUCS Championship in Gloucester.

Coach Lilley has helped guide the side into the last four of this competition after a narrow 20-19 victory away at Durham last week.

“I can’t ask for much more from these boys in the lead up to this game. We have prepared well and we are confident of causing an upset,” he said.

“We have to credit the players because we are so close to Twickenham and they have stayed focused and prepared really hard for this Hartpury game. We have all our eggs in one basket now and we are going to put everything into this game.”

Bath finished fifth in the BUCS Super Rugby table in the first year of the competition which saw the top eight university sides in country compete each week.

The side from the southwest picked up seven wins from 14 games and Lilley feels that the introduction of the new league format has helped improve the profile of university rugby.

He added: “I think it has been a great experience for the boys. We knew it was going to be a bit of a step-up from previous years, but it has been a really good challenge for us.

“To get results like we did last week against Durham and other wins we have picked up this season just shows the improvements we have made. BUCS Super Rugby is a great advert for university rugby and the game is only going to get stronger.”

Bath’s opponents tonight, Hartpury College, clinched the inaugural Super Rugby title after securing 12 wins from their 14 domestic matches and they are on course for the league and cup double after edging out Leeds Beckett six days ago.

Sean Lynn’s men left it late to beat the Yorkshire side 21-19 as they booked their place in the semi-finals for the fifth consecutive year.

Hartpury have beaten Bath on the last 11 occasions and Lilley is fully aware of the task he and his side face tonight if they are to clinch their first victory over College since 2011.

Lilley added: “Hartpury are a class outfit. You have to take your hats off to them for the way they have performed in BUCS Super Rugby and of course in National One too. What they have achieved is superb.

“I think the start will be massive for us. In the last game we played away to them, they came out of the blocks really fast and we let them have too many early points.

“We then managed to get back into the game but we were chasing it so we have to start well tonight. If we can take a bit of momentum out of them early doors then I think it will be a tight game.

“We set a target to hit the quarter-finals and now we are where we are, anything can happen from here. We said at the start of the week we didn’t want to leave any stone unturned and I don’t think we have.  We are fully prepared and it is now up to us as coaches and players to go out and deliver.”

Kick-off at Hartpury College is at 6:30pm and you can watch the game live here: bucs.co/HARvBAT