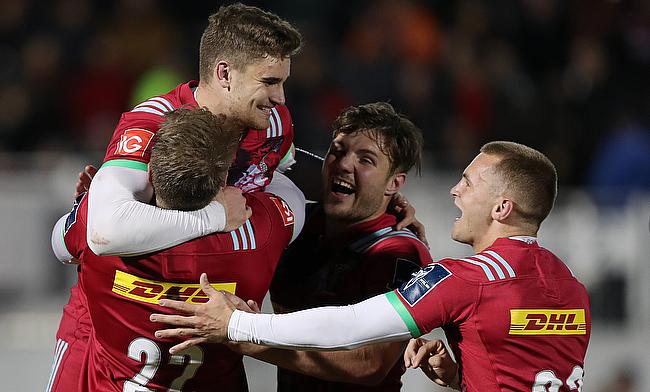 Josh Ibuanokpe scored the decisive try in the added minutes while James Lang slotted a nerveless conversion as Harlequins made a terrific comeback to win the Anglo-Welsh Cup encounter against Saracens 29-30 on Sunday.

With both sides missing several regulars on international duty, only Nick Tompkins remained from Saracens' win over London Irish, while Harlequins made 12 changes of their own.

Fly-half Max Malins slotted a fourth minute penalty to get Saracens off the mark, but three minutes later Harlequins replied back with a try from Harry Sloan.

Malins slotted two more penalties to help Saracens reclaim the lead while Jack Nay's touchdown in the 35th minute meant they ended the first half with a 16-5 lead.

Christopher Tolofua and Will Skelton then combined early in the second half to send Earle over in the corner for his fourth score of the season. Saracens' third try came when captain Ben Earl seized on a loose ball, charged 30 yards through an open defence and fed Tom Whiteley, who completed the easiest of finishes.

Samoa international Alofa Alofa helped the Quins pull back things a bit when he crossed over in the 56th minute and the Quins were relentless in the final quarter when Elia Elia (64') crossed over with a conversion and a penalty from James Lang making it 26-20 in favour of Saracens.

Even though Malins kicked another penalty in the final 10 minutes to extend Saracens' lead to nine points, Lang responded back with a penalty of his own to bring down the gap to six points.

Just as it looked like all over for Harlequins, Ibuanokpe raised their hopes with a try in the two minutes of added time and Lang held his nerve slotting the conversion to steal a one point victory over Saracens.