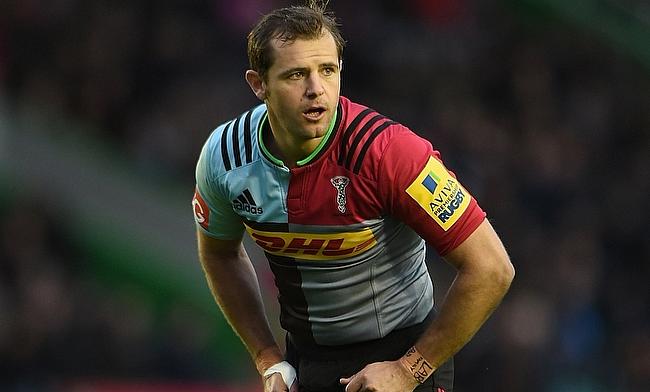 Nick Evans has battled back from a broken leg three weeks ahead of schedule and in time to feature in Harlequins' European Challenge Cup semi-final against Grenoble.

The former All Blacks fly-half suffered his nasty injury in Harlequins' 28-6 Aviva Premiership defeat at Gloucester on February 13.

Quins rugby director Conor O'Shea later tipped the 35-year-old to miss the rest of the regular league season, only chasing a return in time for a potential Challenge Cup final on Friday, May 13.

The ex-Auckland Blues playmaker has defied those expectations to command a seat on the bench for Friday's clash with Grenoble at The Stoop, however, leaving boss O'Shea praising his relentless grind for fitness.

"Nick has fought back fit a couple of weeks ahead of schedule but that's only what we've come to expect of him," said O'Shea, who has named Ben Botica as the starting fly-half.

"He's proved his tenacity and drive so many times with us over the years, that when we knew the extent of his injury we all also knew that he would do everything he could to be back out on the field as soon as possible.

"It's a great boost to have him back and something that will give everyone a natural lift - but at the same time Ben Botica has been playing excellently and fully deserves his place.

"We feel it's a strong line-up and a strong place for us to be at the moment, so hopefully we can go out there on Friday night and bring that to bear against what is clearly a powerful Grenoble side."

Luke Wallace has been given the nod in the back-row over England's fast-improving flanker Jack Clifford, with O'Shea hoping Quins have enough to reach their first European final since lifting the Challenge Cup crown in 2011.

"Certainly one of our clear aims this season has been silverware, so we're excited to be where we are in this competition and keen to do ourselves justice," said O'Shea.

"We haven't been satisfied with our form in the Premiership but this is a fine opportunity for us, but also a massive challenge."

Grenoble edged out Pro12 high-fliers Connacht 33-32 in their home quarter-final, and will be hoping for another virtuoso performance from former Racing 92 fly-half Jonathan Wisniewski.

Head coach Jackman insisted Grenoble are the underdogs heading to Twickenham, citing star-studded Quins as boasting the stronger line-up, at least on paper.

"They have four players who won the Grand Slam with England, but then there is also Tim Visser, Jamie Roberts and Adam Jones," said Jackman.

"There are stars all over the field, and they are a bit like Connacht, with an ambitious game. Their style is to keep the ball in their hands.

"We will have to be very good in defence: it's going to be complicated but we have nothing to lose."