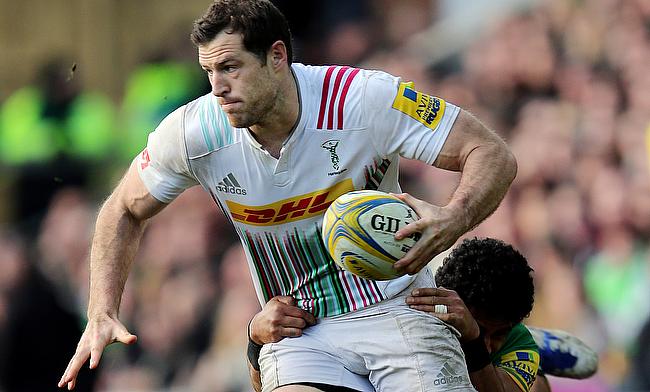 But the home team did suffer a second-half scare at Twickenham Stoop as Nili Latu's brace and Marcus Watson's try meant Newcastle only trailed 28-25 with less than 20 minutes remaining, before Quins pulled away.

Harlequins had won just one of their last five Premiership games, while Newcastle had lost their previous five.

But the visitors did head into this game having been victorious in the previous two meetings between the sides and it was the Falcons who started promisingly as their early pressure earned them a third-minute penalty which fly-half Mike Delany duly converted.

Harlequins' response was immediate and convincing though, with tries by winger Visser and flanker Clifford putting them in the ascendancy.

Visser capitalised on a Newcastle error in the sixth minute, intercepting around 40 metres out and running unchallenged to score under the posts.

Newcastle's Delany did make it 7-6 with another penalty from the 40-metre line, but after a spell of Harlequins pressure, Clifford was able to stretch and plant the ball over the line. A second Ben Botica conversion meant it became 14-6 to Conor O'Shea's men.

There then followed a gritty 20 minutes of play, peppered with stoppages, but shortly before half-time Quins hooker Gray's converted try gave the home side a 21-6 half-time lead.

Harlequins began the second half on the front foot, in search of the fourth try that would earn them an all-important bonus point.

And after determined rucking on Newcastle's five-metre line, the ball was released quickly to find spare man Marchant who had created an overload on the left-hand side to score, with Botica converting for 28-6.

As clouds gathered over the Stoop, a sense of tension seemed to wrack the home crowd as Newcastle got even closer on the scoreboard.

Lock Latu hurled himself over the line from a yard and this time Delany converted to reduce the arrears to just 10 points.

And the Tongan forward was at it again on the hour mark, mauling strongly to score a crucial try that was duly converted by Delany, meaning the game was delicately poised at 28-25.

However, the momentum swung again as a pair of Botica penalties in the next seven minutes eased the pressure on Harlequins, putting them more than a full score ahead.

Visser then scored his second try of the match with eight minutes remaining, getting on the end of a grubber to make it 39-25.

And after Delany was shown a yellow card for a dangerous tackle in the dying stages, Yarde went over for Quins with the last play of the game. Botica converted to make it 46-25.

Vereniki Goneva switches from Harlequins to French side Stade Montois

Chris Robshaw to remain with Harlequins until end of season