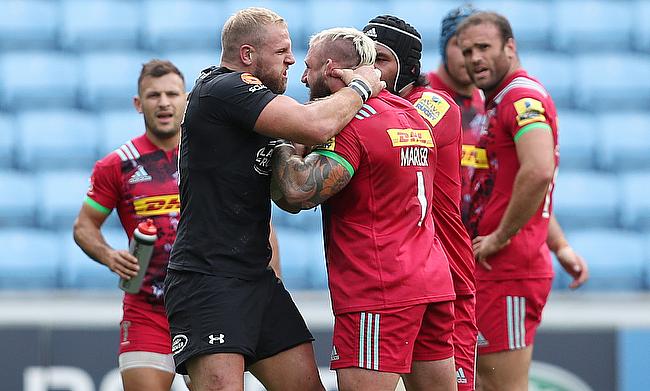 Sin-bins to Danny Cipriani and James Haskell proved costly for Wasps as they suffered a 21-24 defeat to Harlequins in their Aviva Premiership clash on Sunday bringing an end to a 20-game winning streak at Ricoh Arena.

Marcus Smith and Cipriani exchanged penalties at the start of the game following which Christian Wade put Wasps into lead with a 13th minute try.

However, Dai Young's men suffered a setback when Haskell was yellow-carded in the 19th minute for grappling with his international team-mate Marler. Harlequins capitalised on the advantage of having an extra man as Smith slotted a penalty and soon Marland Yarde crossed over to take the visitors to a 10-11 lead.

Cipriani's second penalty at the stroke of half time ensured Wasps ended the first half with a slender two point lead.

Charlie Walker strolled past the post after restart with Smith adding the extras to bring Quins into 13-18 lead but a sin-bin to Kyle Sinckler in the 52nd minute for illegally bringing down a Wasps maul saw Tom Cruse go past the line and the scores remained levelled at 18-18 at the end of the third quarter.

Even though Cirpiani brought Wasps into lead with his third penalty in the 61st minute, he was sin-binned five minutes later for a deliberate knock-on that allowed Smith kick two more penalties in the 67th and 71st minute to help Quins complete a three point win.

Despite the defeat, Wasps are at second in the table while Harlequins move to fifth.