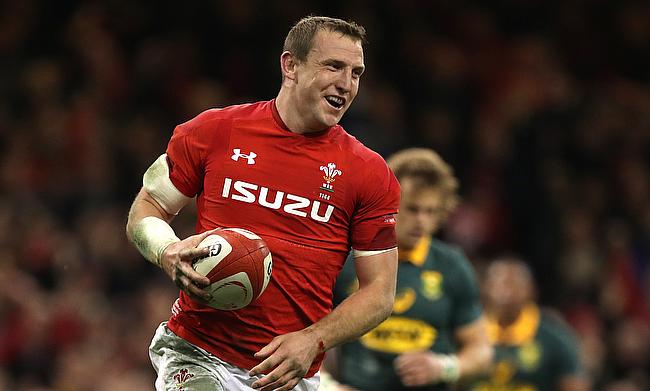 Hadleigh Parkes had a memorable debut with a double as Wales ended their autumn international campaign with a 24-22 win over South Africa at Principality Stadium on Saturday.

The lead for Wales soon doubled when Parkes scored his first try in the seventh minute after Dan Biggar chipped the ball to him and once again Halfpenny was spot on with the conversion.

South Africa finally managed to create a breakthrough in the 30th minute when Josh Navidi was penalised for a high tackle and Handre Pollard kicked a successful penalty to make it 11-3.

However, Parkes continued to add misery to the Springboks as he capitalised on an offload from Taulupe Faletau to score his second try. and third in the game for Wales. Just at the stroke of half-time, Warrick Gelant provided some relief to Allister Coetzee's side when he crashed past the line and the first half came to an end with Wales having a 21-10 lead.

The Springboks regrouped at half time and showed a better intent with Pollard scoring their second try in just five minutes after the restart, though he failed to add the conversion.

The momentum was evident as South Africa claimed the lead for the first time in the game when Jesse Kriel sneaked past a poor tackle from Halfpenny and a conversion from Pollard made it 21-22 in favour of the visitors.

As the game was heading for a close finish, Pieter-Steph du Toit was penalised in the 67th minute allowing Halfpenny to kick a three pointer that brought Wales back into a two point lead that Warren Gatland's side maintained to complete a thrilling victory.