Gloucester scrum-half Ben Vellacott: 'I fell back in love with rugby at the perfect time' 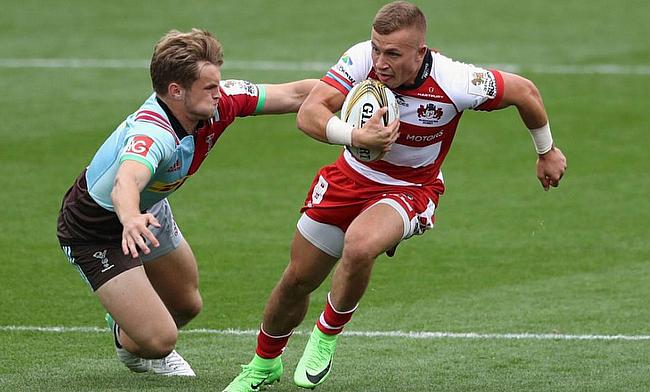 The rising star at Kingsholm is looking forward to making his mark in his first full season with the Cherry and Whites.

Across all sports, many athletes will be able to pinpoint a defining moment in their career; a moment when they knew that they could make their dream of becoming a professional, a reality.

For Ben Vellacott, one of Gloucester’s emerging talents, there has already been a couple of key events.

After finishing school, Vellacott was not offered a contract by Exeter having been part of their academy, but he says that the disappointment only helped him become more determined.

His next step was to turn his attention to his studies while also playing a good standard of rugby. The best place to compliment both was Hartpury College and for Vellacott, the move to Gloucestershire couldn’t have gone any better.

As he prepares for his first full senior season at Kingsholm, Vellacott will be fully aware that he is more than capable of overcoming any challenges that may face him after not making the grade at Exeter.

“From 17, I went down to Ivybridge College and I worked under the likes of Rob Gibson, who at the time was the Exeter academy manager,” says Vellacott.

“I got involved with that, but at the end of it, I was never offered a contract. My next move was to join Hartpury College as it looked very promising to me and I wanted to study at university.  I came to Hartpury without a contract or anything like that, but it made me fall in love with rugby again.”

“From there, I was drafted in to play for Worcester in an A-League game, but at the end of my first year, Pete Buxton from Gloucester got in contact with me and since then, I have been at the club.

“Obviously, I have always wanted to be a professional rugby player and play at the highest level possible. But when you don’t pick up a contract when you’re at an academy and also sustain injuries, you do sometimes question if you’re going to make it, but when you get a chance at somewhere like Hartpury, then you realise that you can fall in love with the game and pursue your aim.”

Rejection by Exeter must have been tough, for the then teenager, to take following appearances in the Singha 7s for the Chiefs in 2013, but four years on, he has tasted the Aviva Premiership with the Cherry and Whites. “It was a dream come true,” said Vellacott on making his debut against Worcester back in January. “To play in the Premiership and do it for a team like Gloucester which has such a great history and support, was incredible.

“It is never set in stone that you are going to get a professional contract anywhere.  You have always got to put in that hard work. That was my target; play well for Hartpury and play well for Gloucester so when injuries come or my chance arises, then I will be able to jump into the senior side and put a performance in on the field.

So could 2017 get any better for Vellacott?

“A couple of weeks later, I signed that senior deal and it felt like all the hard work I had put in so far had paid off and also to everyone who had supported me, it felt like I was giving something back to them,“ Vellacott adds ahead of Gloucester’s first pre-season match against Pro 12 semi-finalists Leinster in Dublin.

Vellacott could not have imagined he would be entering pre-season with Gloucester when he first began playing the sport at Barnstaple Rugby Club aged just five, but having caught the eye when he was plying his trade in Devon, Vellacott is keen to do the same at Kingsholm under Director of Rugby David Humphreys and under new Head Coach Johan Ackerman.

The former South African lock, who guided the Lions to the Super Rugby final this year, has now joined up with Gloucester and Vellacott seems excited to be working under the three time winner of the South African Coach of the Year award.

“Pre-season has been good,” said Vellacott. “We of course have a new coach coming in, but he did come over during the Super Rugby break earlier in the year and it was great to meet him because it just gave us an insight into what he is all about.

“With the new coach, we are looking forward to having a new start. If you look what Johan has done with the Lions in the Southern Hemisphere, then it is positive. He has taken them from a side that weren’t performing great to a team who have reached the Super Rugby final in the last two years which just shows what he can bring to the club.”

There is no doubt that Ackerman, who was capped 13 times by the Springboks, would have been paying attention to the recent Singha 7s tournament where Gloucester beat reigning European Champions Saracens in the plate final. Vellacott scored in that final and added: “It certainly wasn’t the competition we wanted to be in in regards to being in the plate. We wanted to go out and win it. However, after that loss against Harlequins and to come back and beat Saracens and Worcester who were both good teams, really put the boys in good spirits.  In a way, it showed how strong our mentality can be as we head into the new season.”

And the new season is now just two weeks away with the Cherry and Whites beginning their campaign in front of the BT Sport cameras against Vellacott’s former side Exeter. Vellacott will certainly want to continue to impress between now and September 1st.  Many may see the former Scotland U20 international as a deputy to Will Heinz, but the 22 year-old is purely focused on his own game.

“I am just concentrating on being a part of the senior team,” he said. “Obviously over the last couple of seasons I have worked alongside Grieg Laidlaw and Will and I am hoping to do the same with Will. The aim has to be to feature as much as I can for Gloucester and hopefully I can gain more Premiership experience.”