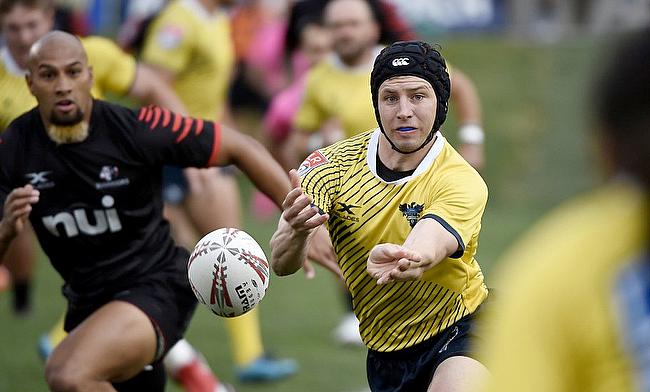 Glendale Raptors will face the Seattle Seawolves on Saturday for the championship of Major League Rugb
©glendalerugby.com

Last Saturday saw the league’s first ever playoffs take place at the home of the Glendale Raptors and the USA’s first ever purpose-built rugby stadium, Infinity Park.

The second game saw Glendale play on their home turf against the Utah Warriors, while first saw the San Diego Legion take on Seattle who finished second in the league standings.

In recent weeks San Diego were joined by former Blitzbokke Joe Pietersen. The South African lined up at fullback for the Legion as well as also taking the kicking duties from captain Tadhg Leader. He started his scoring in the MLR straight away, kicking a penalty in just the fourth minute.

Seattle responded with another penalty soon after through former Ospreys fly-half Peter Smith, but the Seawolves were then stunning by Legion.

Pietersen showed his Sevens pedigree with a mesmerising try in which he broke through the Seattle defence with relative ease.

The scores would read 10-10 at half time after captain Shalom Suniula brought his side into contention with Seattle’s first try of the afternoon. Smith converted the try to tie the scores.

The second half was somewhat more scintillating. The half began with a try from local product, flanker Drew Gaffney. Gaffney’s try was converted by Pietersen.

Sequoyah Burke-Combs scores with a "room service passage to the try line."

It was from this stage that Seattle really took control of the game. The Washington natives began a 20 minutes spell of maintained pressure with a William Rasileka try that Smith converted.

Soon afterwards, former Sevens star Peter Tiberio was put through to give his side the lead that they would keep for the rest of the game. Smith kept up his good kicking display with another conversion.

Substitute Sequoyah Burke-Combs was the next to score a try for the Seawolves, allowing Smith to add another conversion. The try scoring rout was ended with an effort from substitute prop John Hayden. The try was converted by Smith.

Despite Seattle’s final try being scored after the 80th minute, they kept on playing, allowing the Seawolves to score another try making the score line far more respectable.

Nate Augspurger scored his chance with relative ease once the ball was in hand. Pietersen converted the score to bring the game to an end, with the score line reading 38-24 in Seattle’s favour.

It is possible to suggest that Glendale would be the recipients of home field advantage and we’d probably say the same. Infinity Park was bouncing as their team took to the pitch.

The Raptors ran into the lead. Athletic back row Samuel Figg raced over the touchline, allowing returning fly-half Will Magie to restart scoring for the Raptors with a conversion. Magie added a further three points to his tally with a penalty soon after.

It was the turn of Harley Davidson next to score a try. The flying winger darted over the line to score his first of the afternoon. Magie converted his score. The fly-half wouldn’t be so lucky just minutes later as Magie was unable to convert Davidson’s second try.

Utah wouldn’t be entirely quiet in this half though. The Warriors scored through Tongan winger Tonata Lauti. The other returning fly-half, Kurt Morath converted to make the score 22-7 at halftime.

Did you hear? We're headed to San Diego to take on @SeawolvesRFC in the first-ever @usmlr Championship! https://t.co/r2w52A0TOC

After the break, Zach Fenoglio kept up his remarkable try scoring form from hooker with yet another score and gave Will Magie another two points from the boot. Prop Luke White brought Glendale’s scoring to an end with a try that went unconverted.

Utah hit back with a try from former Narbonne forward Tevita Tameilau, a score that Ben Nicholls kicked to perfection. Nicholls was on kicking duty again later on in the game after Samoan-born fullback Don Pati went over the line in an attempt to bring Utah into contention.

Utah’s late surge was in vain however. Glendale secured a 34-21 victory which means they will play Seattle at Torrero Stadium this Saturday.