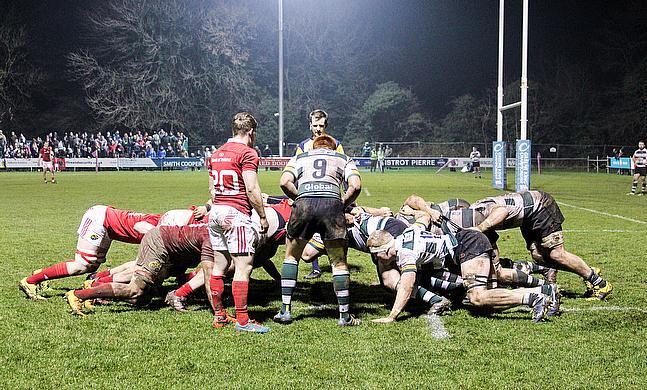 The Championship is back with a bang this weekend
©TRU

Championship Rugby returns this weekend and TRU Contributor Connor Hickinbottom casts his eye over the fixtures in Round 15 including the top of the table clash between Bristol and Ealing.

It is the Blues against the Reds on Friday evening as Bedford host Jersey at Goldington Road.

Bedford currently sit fourth place in the table, despite having won a game less than Jersey and they are also seven points ahead of their opponents.

The Blues will be full of confidence after their recent performance against Bristol. They gave the league leaders their first real scare of the season and denied them their 13th straight bonus point.

Jersey, on the other hand, had to rely on a 74th minute try from Kieran Hardy to overcome Richmond in a scrappy game on the Channel Islands.

It is low-scoring affairs, like their game against Richmond, that has put the Reds in the congested mid-table. Jersey have picked up just a single try bonus point this season and have scored over 20 points just twice.

If Bedford can avoid getting sucked into Jersey’s game they should be able to put points on the board, however, the Reds are exceptional at forcing their game-plan on their opponents.

Rotherham Titans travel down to the capital hoping to build on their first victory of the season as they prepare to take on a struggling Richmond side.

There was jubilation at Clifton Park last time out as two late penalties earned the Titans four-points. This also extended the South Yorkshire outfits unbeaten run to three games, following victories over Connacht and this weekend’s opposition, Richmond, in the British and Irish Cup.

The Titans will be buoyed by this run of form, especially having beaten Richmond 31-10 just a few weeks prior.

Richmond, on the other hand, are in a woeful run of form having lost seven games straight in all competitions. It hasn’t been an easy run as they have faced Ealing twice whilst also having to deal with league leaders Bristol.

This run of form has seen them slip down the league into ninth-place. They do, however, sit 23 points ahead of the Titans.

Doncaster Knights – 27-6 win away at Nottingham

The Knights welcome London Scottish to Castle Park as they look to complete a league double over the Exiles for the third successive year.

The last time London Scottish beat Doncaster was back in November 2014 when they won 19-9 at Castle Park. Unfortunately for the Exiles, that was a very different Donny team and it will be a very difficult result to emulate.

It hasn’t been the best of seasons for the Knights. They have struggled to put back-to-back wins on the table, achieving this feat just twice in fourteen games.

Whilst the consistency of their game is lacking the talent is clear to see. The Knights have achieved nine try bonus points and certainly know how to put points on the board. They also demonstrated in their last outing against Nottingham a stonewall defence, allowing just two penalties as they romped to a 27-6 victory.

The Exiles, however, were the polar opposite as they were comprehensively beaten by Ealing Trailfinders. Scottish find themselves sitting in eleventh place, a 20 point gap separating them from the Titans in 12th.

However, the middle of the table is an extremely condensed area so if the Exiles can string together a few wins they could find themselves challenging the top four.

Both Hartpury College and Nottingham will be glad to see the back of Yorkshire as they face off on Saturday afternoon.

It has been a difficult maiden year in the Championship for Hartpury. Excluding a shock victory over the Knights, they have only beaten the two teams below them; London Scottish and Rotherham Titans.

They are still, without a doubt, getting used to a higher level of rugby and there will be considerable progression next season, but that does not sort out their current woes.

Nottingham are experiencing their own difficulties. Having not won a game since November, the Green & Whites have slipped down the league and now sit in seventh place.

It is a fixture in which both teams will feel they have something to prove and could provide a catalyst for the rest of the season.

Could this be the week Bristol’s unbeaten streak comes to an end? Ealing Trailfinders will be hoping so when they host the West Country outfit on Saturday night.

Bristol had their first real scare of the season last weekend as Bedford Blues ran them close. It took a try from substitute Nick Haining in the 69th minute to secure the victory.

This marked the first time since the opening day of the season that Bristol have failed to secure a bonus point victory, allowing the Trailfinders to close the gap to just nine points and setting up a mouth-watering encounter between the two sides.

Ealing, like Bristol, have been a cut above the rest this season. They had a minor hiccup against Nottingham, but have looked like the only team that can really give Bristol a run for their money.

They will be hoping that is the case when they host the league leaders in front of the Sky Sports cameras on Saturday evening.

Rounding over the weekend’s action is Cornish Pirates against Yorkshire Carnegie.

After a slow start to the season, Carnegie have started to look like their old selves. They go into this game on the back of five straight wins and whilst they haven’t won every game convincingly, they still somehow always find a way to grind out a victory.

Historically, this fixture is a high-scoring affair and it certainly looks as though history will repeat itself this weekend. Yorkshire will be looking to continue their impressive run of form whilst the Pirates will attempt to bounce back from three defeats in a row.

The Pirates were on the wrong end of a shock result in their previous game.They lost 27-24 to bottom of the league Rotherham, giving the Titans their first victory of the season as they conceded two penalties in the final five minutes.

However, the Pirates in Penzance are notoriously hard to beat. This won’t be an easy game for Carnegie and it should go right to the wire.