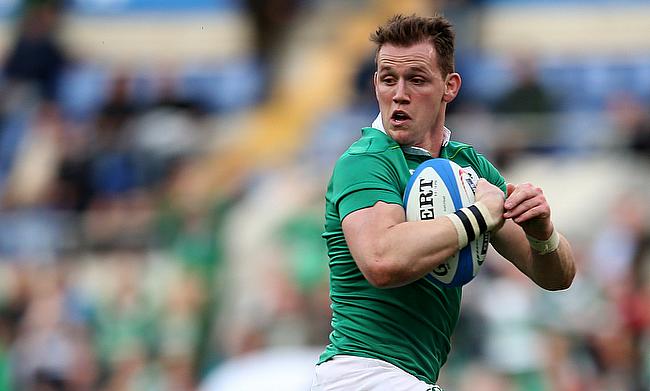 Craig Gilroy touched down twice for Ulster against Munster
©PA

A red-card to Sam Arnold proved costly for Munster as Ulster bounced back from a 17 point deficit to win the Pro 14 clash in Belfast with a 24-17 margin.

JJ Hanrahan missed an early penalty for Munster but hooker Niall Scannell crossed over in the 13th minute and the visitors powered over again from another lineout maul to see the hooker score his second try in the 24th minute. With both not converted, Munster maintained a lead of 10-0.

That became 17-0 just after the half-hour mark when Ulster conceded a five-metre scrum and Munster, on the third reset, shunted them backwards with referee Sean Gallagher marching under the posts to award the penalty try.

The margin looked intact for Munster until the 54th minute as they suffered a series of disciplinary actions. Replacement Fineen Wycherley was sin-binned and moments later, they were reduced to 13 men when Arnold was sent-off for a hit on Christian Lealiifano in the lead-up to Darren Cave's 58th-minute score which John Cooney converted.

Ulster still having an additional man advantage further upped the ante when Cave's kick found Craig Gilroy in the 61st minute as the home side reduced the gap to just three points.

And then with six minutes remaining - and Munster now with 14 again - Lealiifano's floated pass put in Gilroy at the corner to tie the scores.

Any chance of a Munster comeback was put off when Robert Lyttle crossed over in the 79th minute as Ulster completed a 24-17 victory.