Gilchrist’s 50th cap: “You will not meet a harder working guy than Grant - he deserves this milestone moment for sure” 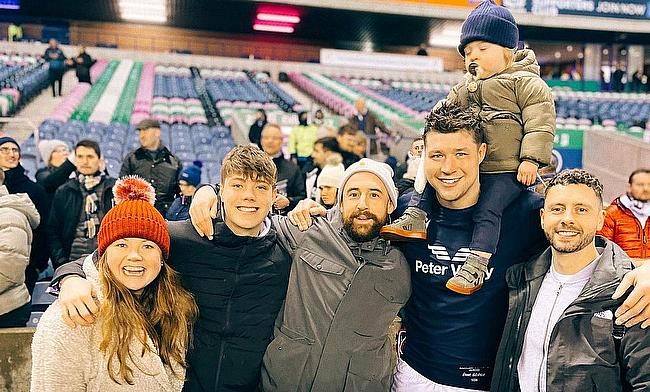 Grant Gilchrist will reluctantly take the limelight on Saturday when he earns his 50th cap for Scotland after an international career of highs and lows that dates back to 2013.

The Edinburgh Rugby second-rower, now 31, will lead the team out onto the pitch at the Principality Stadium in Cardiff as Scotland look to win there for the first time in 20 years and, more importantly, make it two wins from two in this year’s Six Nations.

Gilchrist will probably be sheepish for those few seconds that his teammates leave him out on the pitch for before joining him because he is a humble man. For him, it has never been about individual accolades, but about the squad and the wider picture.

He is not a flashy player, but ask most who have ever played with or against him and they would ink his name into their ‘Dream Team’ because he is a very consistent performer and a real leader out there on the pitch.

Yes, he doesn’t like fuss, but all Scotland supporters lucky enough to be in the stadium this weekend will rise to their feet to applaud him while fans back home watching on television will also cheer him on knowing how much he has given to the Scottish cause in the last nine years.

And the biggest cheers of all for him will come from wife Chloe and his two sons Freddie and Reuben while, fittingly, Gilchrist has been named a vice-captain for this weekend’s clash along with Finn Russell to support Stuart Hogg.

Someone who has known him since they were youngsters is Stewart’s Melville College head of rugby Stuart Edwards.

“We both started playing at our local club Alloa when Grant was five and I was four, so we have been good pals a while,” Edwards, who recently stopped playing for Heriot’s in the Super6 and has now joined their coaching set-up, told TRU.

Can you remember which year these are from? ?? pic.twitter.com/ebXHIfFiNd

“It was great fun down at Alloa and my dad [Henry] and Grant’s dad Tommy were coaching our age-grade so we were together a lot.

“Rugby was a big thing for me and for the likes of Grant, his cousin Sean [Kennedy, now with Glasgow Warriors] and Glenn and Kevin Bryce [both who have been pro players, the latter earning Scotland honours].

“Myself, Grant and Sean spent a lot of time together heading into senior school and even though we were at different schools [Lornshill Academy and Alloa Academy] we probably spent most days together as firstly myself and Grant moved on from Alloa to play at Stirling County and then Sean joined us.

“Grant and myself had great times together on the pitch and we were part of the Stirling County team that won the under-18 Youth Cup final against Musselburgh. At the time, that was massive for us and all our teammates.

“I was then lucky enough to win it again the next year and by then Grant, just out of school, was already making an impression with Stirling County’s senior teams.

“We played one year together in the County first XV and then he was gone off to Edinburgh pretty much and his pro career was underway.

“He also had a spell in New Zealand [as part of the Macphail Scholarship] and since then he has had quite a few serious injuries, but he always puts the work in and gets back and whenever he plays he never lets his side down.

“You will not meet a harder working guy than Grant. He deserves this milestone moment for sure that is coming up for him in Wales.

“He is also just a great mate to have and it was so good being at BT Murrayfield last weekend to watch him beating England, a special day.”

“Everyone at the Alloa club is so proud of him”

As well as the support from Chloe, Freddie and Reuben on Saturday, when Gilchrist enters the field of play, there will likely be big cheers emanating from the clubhouses at Earlsfield and Bridgehaugh too.

That is because Gilchrist served both Alloa and Stirling County commendably over the years before hitting the pro ranks.

Jim Gove, a past president of Alloa who has been involved there for over four decades, said: “It really is fantastic to see what Grant has gone on to achieve.

“Everyone at the Alloa club is so proud of him and it is so good for our current youngsters to be able to watch the television and see a guy who came through the same youth set-up as them doing great things in the game.

“He is also a brilliant role model and whenever he is available he comes back down to the club and speaks to the kids at summer camps and such like.”

Henry Edwards, mentioned by son Stuart earlier, coached Gilchrist when he was in the minis at Alloa and said:  “It is brilliant to see him reaching 50 caps.

“In terms of Alloa, his family has a long tradition of being involved because his grandad, dad and uncle all played for the club and so it meant that Grant was down there from an early age.

“Since he went professional, Grant has had a few setbacks, but he never seems to let them phase him. He is a very determined character and someone who has fought hard to where he is. Every team needs players like Grant who carry hard and do the unseen work.”

Eddie Pollock, now on the committee at Stirling County and part of their Super6 coaching set-up, has known Gilchrist for years and he feels it is his lineout work that sets him apart.

“I have never seen someone who is so good when it comes to lineouts, whether that is in an attacking sense or defensively,” Pollock explains.

“He is an expert and being able to pick opposition’s lineouts and for any team that is a massive weapon to have.

“Even as a young guy, he was very thorough when it came to the detail around the game and that is what has helped him get so far and do so well.

“I must say he is also great at giving advice to young players, especially second-rows, at County and elsewhere which is excellent. Nothing is ever too much trouble for Grant. He is one of the good guys in the game in Scotland.”

“This means the world to me”

Gilchrist made his Edinburgh debut as a youngster in 2011 and his Scotland bow came aged 22 in the Six Nations of 2013 in Paris against France.

He was named Scotland captain having just turned 24 by then head coach Vern Cotter in the Autumn of 2014 before disaster struck.

A large part of the next 18 months were spent dealing with various injuries and that meant he missed the chance to be a permanent captain and he was also absent for a big chunk of Rugby World Cup 2015.

He has only gone from strength to strength since then and the fact that he is currently keeping Scott Cummings, arguably Scotland’s best performer in 2020 and the first half of 2021, out of the starting XV says it all.

“Getting my 50th cap, this means the world to me,” Gilchrist himself said. “It will be a hugely proud day and is something I’ve worked really hard for. I know it will mean so much to my family.

“But it will certainly mean a hell of a lot more if we can go to Wales and get the win - and that’ll be my focus this weekend.

“You don’t forget your first cap - I remember it quite vividly - 9pm kick-off, a rainy night in Paris. I was as nervous as I’ve ever been for a game of rugby. It was an amazing experience and although we didn’t come out on the right side of the result [they lost 23-16], it was a close game, a huge battle and, as an introduction to Test rugby, it let me know what it was all about.

“I absolutely loved it and I have strived in every year since then to get myself on the pitch as much as possible. There have been ups and downs over the last nine years but I have always fought. I am really proud every time I get the chance to play and I am champing at the bit to get back on the pitch because I absolutely love it.

“I don’t think I need any more motivation, but now to play in front of my wife and two boys makes me and them proud and that matters a lot to me.”

Wales v Scotland kicks off at 2.15pm on Saturday in the Six Nations and is live on the BBC.