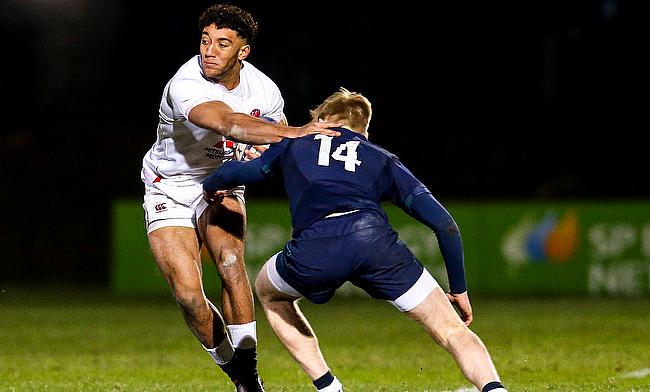 Hamer-Webb made his debut for Bath aged 18
©JMP

A mainstay on the wing for England during this U20 Six Nations campaign, Gabriel Hamer-Webb has impressed many since he burst onto the scene for Bath late last year as a substitute in the Champions Cup.

After experiencing his debut away to Exeter in the Premiership Rugby Cup, Hamer-Webb made his first start two weeks later against Leicester Tigers at the Rec, but it was in November when the 19-year-old caught the attention of the rugby public with his try against Ulster in Europe.

Surrounded by top quality back three players at Bath, Hamer-Webb is often found in the company of Anthony Watson, Semesa Rokoduguni, Ruaridh McConnochie and Tom Homer, all of whom the young wing says he learns from everyday he is at Farleigh House.

“For me, it is brilliant,” Hamer-Webb said. “I can pick Anthony Watson’s brain whenever I want, I can watch first-hand Rokoduguni’s step in training and everything just helps, and you can take something from everyone. Like Tom Homer, just him being so consistent, it really helps to just watch and learn.”

Coming straight out of Beechen Cliff School and signing a senior academy contract with Bath for this season, Hamer-Webb believes that he has learnt a lot already in his first term as a professional rugby player.

Well I think we've found a new star ladies and gents ??@GabrielMHW that was one hell of a way to make an impression in the #HeinekenChampionsCup ??

The 19-year-old scored this worldie for @bathrugby with his first touch on his European debut yesterday ?? pic.twitter.com/LFtlwpOhKi

“The step-up from schoolboy and then starting against Ulster or Quins is huge,” Hamer-Webb said. “But the learning that I have taken from Bath, like learning from Girvan Dempsey and the like of him at Bath is pushing me so far, that I am now as comfortable playing against Ulster as I was playing schoolboy.

“I would say that, the only person who is going to make you better and allow you to perform at your best is yourself. Just to make sure you do push yourself in the gym, do your hardest in everything like eating, doing your homework and watching clips so that you can push yourself. That allows others to build around you so that the team forms and is growing.”

Given his first taste of U20s rugby this winter, Hamer-Webb became an instant starter for England in this Six Nations, helping towards wins away at France and Scotland. Starting in the loss at home to Ireland as well, the wing believes that falling short to the Irish may not be the worst experience for him and his teammates to have had.

“It isn’t something bad for a team to lose,” Hamer-Webb said. “You get your main learning points from losing. A team can win every single week, but what are they actually learning? We have got some great learning points to take into this Wales game, we have built really nicely throughout the week and it is looking like we are going to have a real good day on Friday.”

Wales’ U20s currently sit bottom of the Six Nations table with four points, having only won one of their opening three fixtures in the competition. Hamer-Webb is again starting on the right wing for Alan Dickens’ side, with Sale Sharks centre Connor Doherty captaining the team.

Due to concerns over the recent coronavirus outbreak, there will not be a full slate of fixtures in the Six Nations. All Ireland games against Italy have been postponed due to the visiting country’s outbreak of the virus. Last night it was also announced that all sports fixtures in Italy would be played behind closed doors in order to try and prevent any further spread of the illness.

Taking place at Kingsholm tomorrow night, England can now make up ground on Ireland who are currently six points ahead of Hamer-Webb and his teammates at the top of the Six Nations table. For the 19-year-old, he says that England’s objectives are simple.

“I think you will see an England team that is only going there for one thing, which is the win,” Hamer-Webb said. “I think we will play our rugby. Hopefully it is a nice dry evening and we can really get our hands on the ball and really express ourselves.

“Off the back of Ireland, I think we have got a lot that we want to show. We want to show that we are ready to go to this World Cup, lift that trophy and do the best we can.”