Four things we learned down under: Part 2 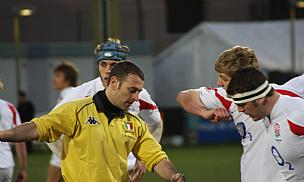 Four things we learned down under: Part 2

New Zealand, Australia and South Africa each recorded their second wins of the summer against northern hemisphere tourists. Elsewhere Scotland continued their promising tour with a four try victory over Fiji.

1. Irish all out of luck

It's hard to imagine Ireland will ever have a better chance to beat the All Blacks. Entering the closing stages a first Irish victory in 107 years of the fixture was on the cards. Having been six points adrift Ireland pegged New Zealand back in the final quarter. Momentum favoured the touring Irish. New Zealand fullback Israel Dagg was sent to the bin for a late block on Rob Kearney. The All Blacks were visibly rattled.

The game swung on one controversial moment. Referee Nigel Owens penalising Ireland at scrum time, subsequently stripping Ireland of an opportunity to seal the match in the closing stages. Owens decision, he judged the Irish pack to have run the scrum round illegally, baffled pundits and fans alike.

Then forced to defend deep in their territory, Ireland resisted the All Blacks advances until Daniel Carter drilled a drop goal between the posts. He needed two shots for glory, his first effort having been deflected wide by the onrushing Irish defence. That deflection gifted the home team a scrum on five and the perfect platform for Carters successful drop at goal which broke Irish dreams. It was cruel on the Irish, for the All Blacks to have good fortune on their side is blatantly unfair.

In the second breathtaking test of the day Wales lost narrowly to Australia. Mike Harris breaking Welsh hearts in the dying moments. Unlike their Celtic cousins though, Wales only have themselves to blame as they contrived to throw away a winning position late in the game.
One point to the good, there was less than two minutes remaining. And crucially, Wales had possession. Usual protocol from that position should see the use of heavies to close out the game. Keep it tight and there's no risk of Australia getting even a sniff of the ball. That logic abandoned Rhys Priestland on this occasion.

Bad enough that his kick up field was the wrong decision, but neither was it deep enough into Australian territory. The Wallabies retrieved the ball comfortably, and through Welsh ill discipline, worked their way up the line into a winning field position. Another penalty conceded handed Harris the match winning opportunity.

It was an otherwise excellent performance by the Welsh, and a great shame that they couldn't close it out to set up what would have been a mouth-watering series decider next weekend. They had improved on the first test a week before, with Leigh Halfpenny I think deserving a special mention for an even quicker recovery than that.

Taken out in the air, the Cardiff Blue landed hard on his head. A yellow card, and subsequent citing, was the least Cooper Vuna deserved for this dangerously naive obstruction. Moments later, however, Halfpenny was up on his feet striking the ball as sweetly as ever towards what should have been a Welsh victory.

England and South Africa renewed their test series in much the same vein as they finished off last week. It was physical then, and Saturdays encounter was no different with England forced on to the back foot from the outset. The Springboks started like a beast possessed. Few nations, perhaps only the All Blacks, could have contained the physicality of their play. In truth England hadn't done much wrong, it was just that their opponents were in exceptional form early on.

But as the game progressed the touring side grew in confidence. Chipping away at the South African lead it seemed possible England might complete a miraculous comeback. That was until JP Pieterson sliced through weak English tackling, and added the finishing touch to a well worked try which effectively settled the tie. Just about deserved on the day, but we shouldn't take away from England's spirited reply.

It will be interesting to see how England respond to this disappointment come the third and final test next week. There was no shame in defeat this week certainly, and Stuart Lancaster needs to reiterate that in their preparation. Focus on the positives, and build on where they were excellent. Amongst the highlights Chris Robshaw has shown himself a very capable captain on the field. Injury rules him out of the final test. Elsewhere Ben Youngs has improved with each game and Ben Foden remains a world class attacking threat from fullback.

Don't let the fact that Scotland faced relatively weaker opposition take away from a second Scottish victory in as many weeks. Their win over Fiji is significant. After a disappointing Six Nations in the spring Scottish rugby is just beginning to get a feel good factor back. It started with Edinburgh's run to a Heineken Cup semi-final, including that victory over Toulouse in Murrayfield. Glasgow Warriors then qualified for the Rabo playoff only to be defeated by Leinster in Dublin. There's no shame in that.

Scottish rugby has struggled in the past to capitalise on the relative success of their two club teams. Twice now the Warriors have finished inside the top four of an increasingly competitive league. They finished above some good teams thanks to consistency over the course of a long season. And this time the squad has managed to transfer those positives to the national side. Their victory over Australia was perfectly timed, and will have boosted confidence within the camp.

For Andy Robinson, this tour was always about winning. Samoa will provide the next test before the squad fly home, possibly unbeaten. They might not have played back to back tests against the top nations in the world but they remain so far the only home union with a tick in the 'W' column. That should never be underestimated.