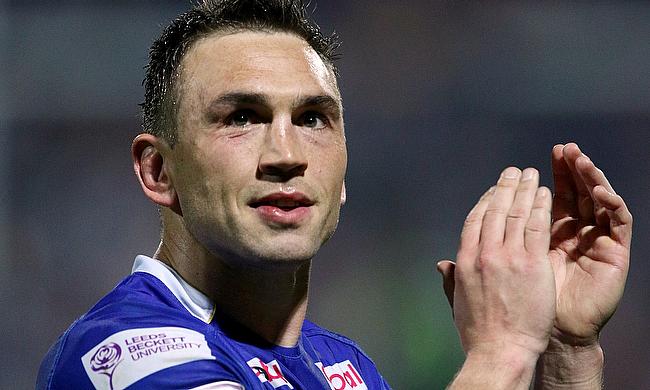 Kevin Sinfield says he is ready to play this weekend should Yorkshire Carnegie head coach Bryan Redpath select the former Leeds Rhinos captain in his squad to face Bedford in the Championship.

The 35-year-old started training with Carnegie last week, less than three weeks on from completing the treble with the Rhinos at Old Trafford.

And although Sinfield conceded he needs time to get used to the code change, he would love to make his union debut on Saturday.

"It's been really enjoyable and everything I thought the challenge would be," Sinfield said. "Walking into that new dressing room, you're never quite sure whether you're going to be accepted or what it's going to be like but the lads have been unbelievable and made me feel so welcome from the start.

"It's very challenging and very different but hopefully it won't be too long before I get to have a run.

"I'd love to have a run this weekend but it may be a little too early yet. But if he (Redpath) was to offer me 20 minutes, I'd snap his hand off."

Sinfield began his league career at loose forward before moving to stand-off, a position which mirrors fly-half in union, and Redpath confirmed Sinfield will play at 10 and take over the kicking duties straight away.

"He's fitted in really well," said the former Scotland captain. "I'll analyse training now and see if it's the right thing to put him in this weekend or not. He's available but ultimately it has to be the right thing for him and the team, too.

"We can't put him in just because it's Kev; he needs to be armed with enough ammunition to go into a game and also be able to have an impact and change a game. He'll learn quicker from playing.

"Kev is a link player and his kicking out of hand is good which is a massive plus. He's impressing everyone in terms of how quickly and how easy it is for him to make the transition.

"If he plays, he'll kick. His goal kicking is second to none."

Sinfield left rugby league as Leeds' most successful captain and the club's record points scorer but he is still highly motivated to continue his success as a rugby player.

Yorkshire Carnegie are second only to Bristol in the second tier and Sinfield is excited by the prospect of helping his new club to promotion.

"But the aim is to play in the Premiership. I want to test myself against the best.

"I think they're in a great position having lost just two games and from what I've seen the club has the ingredients to be successful."

Carnegie are likely to attract their biggest crowd of the season - currently 2,373 - when Sinfield makes his first appearance for the club at Headingley, which is likely to be against London Welsh on November 27.

And Sinfield has urged rugby fans in Leeds to get behind Carnegie and join their journey back to the Premiership.

"The aim is to grow the club," Sinfield added. "We've seen how successful the Rhinos have been and I'm a Rhinos supporter now. It'd be great to see some shirts there and some crossover.

"Hopefully people in this area will come and have a look because the team here is a good one and plays an exciting brand of rugby."