Flatman: If I had a pretend £20, it would go on Saracens 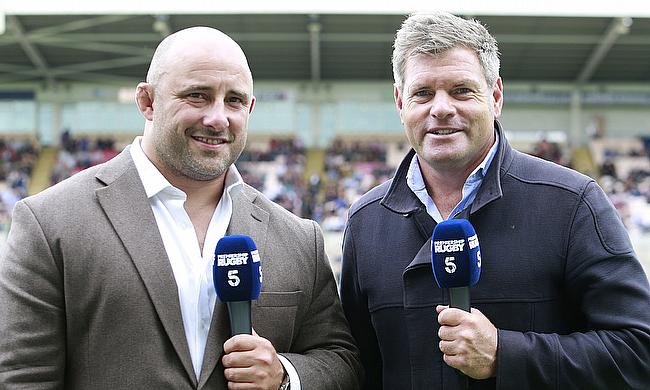 Fifteen weeks have passed since that pulsating afternoon which saw Exeter Chiefs create history in the Aviva Premiership Final and now we have arrived at the beginning of a new campaign. Everything points towards one of the most exciting seasons and if it is anything like 2016/17, then we are in for a treat.

The embarrassment of riches in England’s top domestic division wets the appetite further and a sprinkling of emerging talent really highlights the strength of this league. Each squad looks stronger than ever heading into this latest instalment and new Channel 5 pundit David Flatman cannot wait for things to get going once again.

“I’m excited to get everything started,” said Flatman who will partner Mark Durden-Smith on Channel 5’s new highlights show. “All the chat about each team being the best in the country during pre-season will be over and it will be down to business to see how everyone will deliver. I’m just glad it’s not me!”

The new campaign gets underway this Friday with reigning champions Exeter travelling to Gloucester, while Newcastle Falcons host Worcester Warriors.

Exeter have set the bar high for themselves.  After a spluttering start to the last campaign, they pulled off a quite stunning run to clinch the Aviva Premiership crown. They head into this new season, 17 league games unbeaten and Flatman believes that Exeter are more than capable of retaining their title, but it will be tough.

Flatman said: “From what I've heard, Rob Baxter has stepped everything up at Exeter. Yes, they have that chemistry and team spirit, but they are being asked to work harder. I expect no less from Rob. In truth, they won't win it again if they play like they did last season, but they will certainly aim to do just that.”

The Chiefs have kept the bulk of their squad (other than the notable departure of Geoff Parling) and the same applies for Wasps. Dai Young’s men were rampant at times last season and won’t need to tweak too much to have a strong chance of being in a Twickenham final once again. Flatman continued: “Along with Exeter and Saracens, I would include Wasps in that bracket too. They are good enough to challenge and they have a great boss.

“Dai Young has that balance between love and respect and the players give him both. Loads of other clubs would happily throw money at Dai to join them, but he knows that Wasps have a great set-up and are building something very strong. A lot of teams will get hammered at the Ricoh this year.”

And on Saracens, who have recently tied Owen Farrell down to a new five year deal, Flatman added: “I know Chiefs had Jack Nowell in the Lions squad, but you look at the talent that Sarries had and you just know they will be strong again. They keep on getting better and better, which has shown in Europe, so if I had my pretend £20 it would go on them.”

Leicester are preparing for their first full season under Matt O’Connor and they’ll be hoping that their ship has settled for now. Tigers fans may well be excited by this upcoming campaign, especially with George Ford moving to Welford Road to add to the mouth-watering partnership of Matt Tooma and Manu Tuilagi. Couple that, with a solid pack and Leicester’s chances of another top four finish seem high.

But Flatman is hoping something can happen at his old club Bath. Like the aforementioned Matt O’Connor, Todd Blackadder has also been through his first full pre-season with the club but it hasn’t been as solid for the men from the Rec. Injuries plus a lack of recruitment may be a cause for concern, but Flatman is staying positive.

“He added: “You'd have to say Bath are still an unknown. Under Blackadder as Director of Rugby and Tabai Matson, they didn’t really put their stamp on the team after inheriting the squad last year.

“I was pleased to see the signings of Anthony Perenise and Sam Underhill and there are rumours that some big name signings are to come. I think for Bath, we will gauge where they are after the first 6/8 weeks because we still really don't know what to expect.”

For the likes of Harlequins and Northampton, they will be hoping to really challenge for a play-off spot. It sounds obvious, but Quins are one of those sides who could go either way. They have recruited a few internationals including Demetri Catrakilis and Francis Saili, but a good start for John Kingston’s men could be key. As for Northampton, last year was bitterly disappointing. They finished the campaign in seventh, but are in the Champions Cup and with the likes of Francois Van Wyk and Piers Francis now at their disposal, they could be menacing if everything clicks.

Gloucester may well head into this new season with some optimism. The Cherry and Whites just need to unlock their potential and under new Head Coach Johan Ackerman, they may just be able to achieve that. Ackerman turned the fortunes of the Lions around, having guided them to back to back Super Rugby finals, and Flatman is a fan of the former Springbok.

“Johan Ackerman seems to be very a pastoral coach. It is all well and good playing for a coach for five years, but some may not know where you live, your wife’s name, how many kids you have etc.

“I think as a coach, you have to be hands on and really engage with your players in order for them to play for you and give it their all. At Bath, that was the same with me because if you had a good relationship with a coach, then you would go above and beyond on the pitch for them. I think Ackerman can certainly improve Gloucester but like Bath, they are an unknown.

“Newcastle seem to be inspired”, said Flatman and I agree with him. They achieved their highest ever league finish in a decade last season and deservedly so because of their brand and style of rugby. The likes of Toby Flood, Maxime Mermoz, DTH van der Merwe and Sonatane Takulua, who has recently signed a new four year deal, could create real problems for opposition and Flatman believes they could surprise a few people this season. “They have made some great signings plus they have some really creative players and on a plastic pitch, they will be a force this year."

Will Sale have the right balance this season? Former Australian international James O’Connor was the clubs representative last week at the Premiership Launch and Steve Diamond has also added the likes of Faf De Klerk and Josh Strauss to an exciting young squad. Sam James, Mike Haley, the Curry twins and new captain Will Addison are all under the age of 26, but despite their excellent youth system, Flatman isn’t too sure about their chances.

He added: “Sale have great young talent and it is really good that they are tieng them down to long term contracts, but in terms of pushing up the table, I don't know. I think they lost a bit of their edge when [Danny] Cipriani left as well as when Vadim Cobilas departed. Cips was great on the front foot and Cobilas was awesome up front. They had a disappointing year last year and I don't expect them to fly this season."

Below Sale last season were Worcester and Flatman has a very different outlook for the Warriors, despite them losing a few players. “Worcester could surprise a few people. Gary Gold is a great coach and some of the talent they have in that squad such as Ben Te'o and Francois Hougaard suggests they won't roll over. They will take some scalps at home this year and I think they will be comfortable heading into the final two months of the season.”

New boys London Irish have certainly recruited heavily. When we spoke with Fergus Mulchorne earlier in the summer, he said that the club’s sole aim was to gain promotion and it is exactly what they achieved. Now, can Nick Kennedy keep them in this division? They have brought in 12 new faces including Petrus De Plessis and Franco van der Merwe ahead of the London Double Header with Quins but Flatman knows it will be tough for the Exiles: “De Plessis is an outstanding signing and things are looking bright for them, but it certainly won't be easy and Nick will know that. They have a tricky start as well, but they aren't in bad shape heading into the new season.”

Flatman will be alongside Mark Duden Smith for the Premiership Rugby highlights Show which airs on Channel5 from Sunday 3rd September at 8pm.