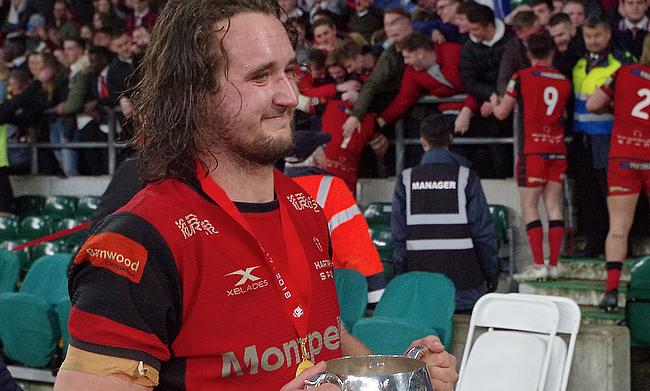 After clinching the BUCS Super Rugby title on Wednesday, Tom Pashley will captain in England Students
©Joe Harvey and TRU

Hartpury are represented by five of their BUCS Super Rugby Championship winning squad in England Students' upcoming games against France.

All of Hartpury’s representatives started in the BUCS final that was staged at Twickenham. TRU’s Man of the Match Luke Stratford, Max Clementson, James Forrester, ace fly-half Sam Leeming and flanker Tom Pashley will hope to keep up their success on the tour to France.

England’s Students will be led by Hartpury captain Pashley in a squad that also has BUCS Super Rugby Player of the Year Oliver Robinson from Northumbria University.

Robinson’s Northumbria exited the Super Rugby competition in the quarter-finals, losing out to the University of Bath at Kingston Park. The number 8 will hope to prove himself in the England Students games after the squad arrived in France on Friday.

Robinson will be joined on tour by team-mate George Wacokecoke. The former Bath winger has also represented Newcastle Falcons in A-League meetings since he began studying in the north-east.

Three Bath players made the squad. The Somerset based trio went out to Cardiff Met in the semi-finals on their home-patch. Will Britton, Jack Edmondson and Will Partington will be joined on tour by coach Aaron James, who is also head coach of the England Students side.

Eight years of hard work between the two of them! Head coach Aaron James, two years as assistant and four as head coach; assistant coach @IRO1981, two years in the role. Both will be leaving #EnglandStudents after the internationals against France. Thanks Aaron and Iro! pic.twitter.com/pyJLsq6KRK

Exeter, who like Bath fell at the semi-finals of the BUCS Super Rugby Championship, have three players selected. Hooker George Gosling is joined by team mates Simon Linsell and openside flanker Felix Maddison.

Two Durham players have been selected for the squad. Centre Ben Stevenson is joined by compatriot Colin Markham, who will offer stern competition in the second row.

Leeds Beckett have kept up their fine tradition of players representing the England Students side. James Elliott represents Newcastle Falcons in their A-League games and Conrad Cade is the starting loosehead prop in the BUCS Super Rugby team of the year.

Nottingham Trent have had two players selected after their debut season in BUCS Super Rugby. Winger David Williams will be raring to go having re-signed with Nottingham Rugby Club to play in the Championship for another season while Tom Cardall joins him on the international stage.

Guess where we are! (Hint: the sign is in a different language...) #EnglandStudents pic.twitter.com/F6HaIMXkOy

Finally, Charlie Reed is the only squad member to have been picked from a team outside of BUCS Super Rugby. The University of Manchester, Macclesfield Rugby and Sale Sharks player definitely has the talent to flourish on tour.

England take on France this Sunday at Chambéry Rugby Club and the second fixture will be played on April 20th.

Head coach Aaron James told the englandrugby.com: "We’ve selected a very strong side across all positions, and we have a number of options which will give us a good chance of beating France.