A look back at HSBC Singapore Sevens 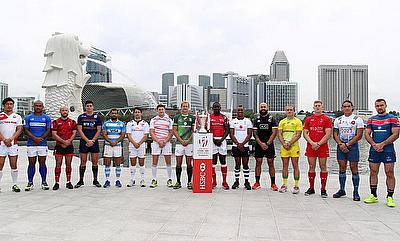 As the Singapore leg of the Men's HSBC World Rugby Sevens series kicks-off this weekend, we take a look at the last two years of the tournament that saw Kenya and Canada create history.

The first five editions of the tournament was conducted in 2002, 2004, 2005 and 2006 that saw New Zealand clinch the title twice while Fiji and South Africa won the series one apiece before it was replaced in the IRB calendar by the Australian Sevens. Singapore Sevens return back to the fold after securing a four-year deal to host a leg of the Sevens World Series starting from 2016.

Kenya's dream of winning a series finally came alive and it took them a whopping 114 tournament to achieve it. Though, it wasn't a straightforward one.

Kenya in Pool C started the tournament with a 21-7 win over Russia but the decisive moment came when they drew with Scotland 12-12 and it proved enough for them to finish second in the tournament despite losing their last game in the group stage 14-0 to table-toppers South Africa. South Africa and Kenya progressed to the knock-out stage.

The belief in the team though came with a resounding 28-7 win over France in the Quarter-Final but they were stretched by Argentina in the semi-final. Kenyan sevens legend Collins Injera slotted a penalty in the closing stage to help his team to a 12-15 thrilling victory and rest was history as they dominated Fiji 30-7 in the final to win their maiden title.

"At that point in the Argentina game we had already subbed off our kicker," recalled Injera. "I'm not usually a kicker in the team, there are many good kickers in the team but I was the only one there at the time. I remember I had missed a relatively easy conversion earlier on but when the penalty came from the kick-off I thought, I'd been doing it in training so why not have a go?

"I ran over to the captain and I said let me have a crack at it and he said 'go for it'. So I took the ball and gave it a boot and when it went through the posts it was quite a relief to be in the final."

If Kenya had to wait for 114 tournaments for their first series win, Canada achieved it after featuring in 140 tournaments.

"You definitely get a nostalgic feeling coming back to Singapore this year," said Harry Jones. "When you walk back in to the hotel or visit the stadium and remember everything that happened there. All these small things pop up now and then but obviously the biggest one stands out and that's making Canadian history and I'm so lucky to have been apart of that."

Canada managed a 28-15 win over Russia and a 34-0 win over Hong Kong to become the second in Group A behind Fiji to make it to the quarter-finals.

Their biggest achievement though came in the quarter-finals and semi-finals when they went on to knock out New Zealand and England respectively with convincing wins to set up the final with United States which they won 19-26.

"We were one score up in the second half but then they tied it up. Luckily, Lucas Hammond scored for us again at the end to seal it but even then there was a few minutes left on the clock. They were a nervy few minutes.

"We finally got a scrum and it was pretty scrappy and when the ball came out to Nate [Hirayama] there was about eight or nine seconds on the clock, so he started running backwards and checking the clock before kicking it out. The final whistle went and we were all ecstatic!"

Singapore Sevens continued to produce new winners. Will there be another surprise this time around?