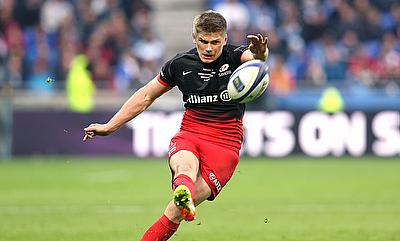 Fly-half Farrell completely outclassed his counterpart Dan Carter as the contest between the two players was one of the major interest among the fans.

Not since Lawrence Dallaglio's Wasps in 2007 had an English side won European club rugby's most prestigious trophy.The timing of this win couldn't have been better for Saracens, as they are only a couple of victories away from successfully defending their Aviva Premiership title.

If Saracens manages to achieve Premiership rugby glory, they will be joining the ranks of Wasps, who 12 years ago successfully completed a domestic and European double.

All Blacks World Cup winner Carter left the playing field with only a couple of minutes into the second half due to injury. Racing 92 who had already lost scrum-half Maxime Machenaud on the 21st minute of the game, had to rely upon centre Johan Goosen to kick three penalties.

A 58,000 crowd at the Grand Stade de Lyon witnessed a try-less final.

Farrell put Saracens on the scoreboard on the ninth minute of the game after successfully scoring a penalty which resulted from a five meters scrum infringement.

Racing 92 leveled the scoreline as Goosen landed a penalty on the 17th minute scoring from just inside the opposition half.

Farrell made a fruitless attempt at a drop-goal before Racing 92's Machenaud and Saracens hooker Schalk Brits left the field for head injury assessment.

Farrell added two more penalties to his tally on the 24th and 31st minute completing his hat-trick.

Goosen reduced the deficit down to three points as he landed another penalty in 35th minute before Farrell restoring the six points lead by scoring his fourth penalty in the 38th minute.

The goal-kickers continued to control the scoreboard in the second-half of the game as Farrell added three more to his tally with two of them scored in the final four minutes whereas Goosen managed just one.