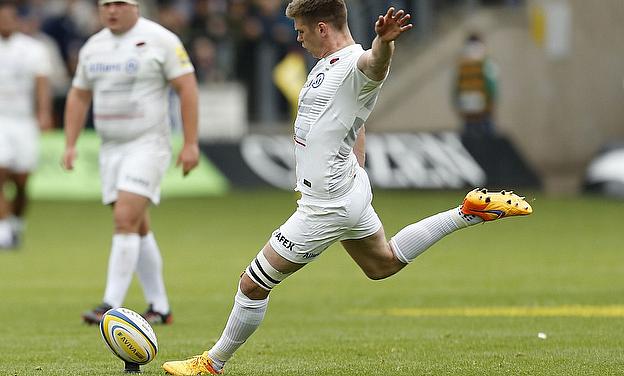 Saracens emerged triumphant from a heavyweight showdown at Franklin's Gardens to advance into next Saturday's Aviva Premiership final with a 29-24 victory over Northampton.

A thunderous first half at Franklin's Gardens finished 13-13 and inevitably the remainder of the play-off was reduced to a war of attrition between the rival forwards and goalkickers.

Three of the four tries were the product of line-out drives and the fourth was claimed from a kick-chase and clean breaks in an impossibly-tight semi-final were rarely seen from either side.

Saracens hooker Jamie George and Northampton flanker Tom Wood were shoved over for tries after the interval as the dominant forces in English club rugby delivered another belligerent chapter in their rivalry.

Edging it in Saracens' favour was the accuracy of Owen Farrell, who finished with a 19-point haul composed of five penalties and two conversions to avenge his team's loss in last season's Premiership final.

Saracens became only the fifth away team in 21 play-off semi-finals to progress to the Twickenham showpiece and while Saints were disrupted by injuries to full-backs Ahsee Tuala and James Wilson and prop Alex Corbisiero, they looked lethargic at times.

Opportunism enabled Saracens to plunder the opening try just two minutes into the game in a move that started with Duncan Taylor's flicked pass between his legs.

David Strettle gathered and spotting that Tuala was down injured, punted upfield with Taylor the first to arrive. Taylor beat Lee Dickson on the ground and then fed the onrushing Strettle the scoring pass.

Northampton's patience and forward power enabled them to draw level as repeated advances on the whitewash finished with Mako Vunipola in the sin-bin for collapsing the maul and a penalty try awarded by referee Greg Garner.

The pressure continued as Saracens were driven back at the scrum and Dickson, Dylan Hartley and Samu Manoa carried with intent before scrambling defence prevented Saints from scoring a second try.

When Mako Vunipola returned, last season's beaten Premiership finalists had weathered the storm and once the omnipresent Bill Vunipola won a penalty, Farrell kicked his team back into the lead.

Myler and Farrell swapped penalties, but the second quarter belonged to resurgent Saracens with back rows Maro Itoje and Billy Vunipola leading the charge.

But four minutes into first-half injury-time Myler levelled again from in front of the posts with man of the match Jacques Burger repeatedly involved at key moments.

First he conceded a penalty for tackling Courtney Lawes around the throat, then he drilled Ken Pisi into the turf before finally shoving Dickson in the throat, sparking a melee that ended with Myler landing three points.

Saints used their driving maul to give Myler another shot at goal that the fly-half successfully completed, but Saracens' response was to surge forward from an attacking line-out and drive over with George emerging from the heap of bodies with the ball.

Farrell converted and landed a third penalty as daylight opened up between the rivals, but in the 58th minute the pendulum swung yet again when the champions advanced from a line-out once more with Wood barrelling over.

The tension continued right until the final whistle as Myler booted a late penalty to give Saints hope of snatching victory if they could break through from an injury-time assault, but Saracens' defence was outstanding.