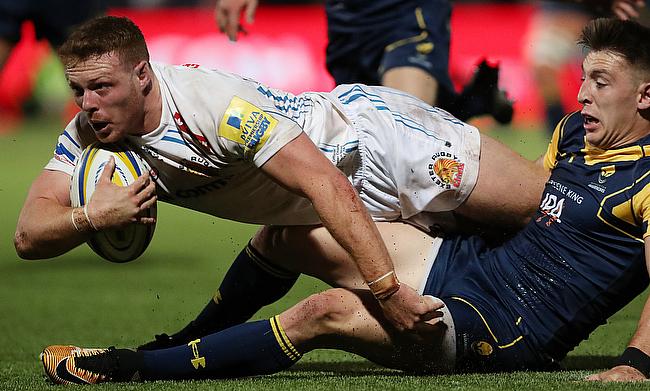 Exeter Chiefs came up with an eight-try performance as they trounced Bath Rugby 57-20 in the 13th round of the Gallagher Premiership at Sandy Park.

The win has taken Exeter to the top place in the Gallagher Premiership table with 45 points while Bath are at sixth place with 30 points.

Exeter got off to a flying start with Tom O'Flaherty touching down in the sixth minute after a pass from Nic White but Rhys Priestland responded back immediately with a penalty goal in the 10th minute.

Rob Baxter's men doubled their lead by the 14th minute with Olly Woodburn doubled the lead following a break from Tom Hendrickson. Joe Simmonds kicked the conversion and a penalty goal to make the scoreline 15-3.

Exeter further extended the lead around the half-hour mark as Sam Simmonds dived over the line at the back of a maul and their momentum took a boost with Bath losing Josh McNally to yellow-card for a high-tackle.

The home side made full use of the numerical advantage as Jannes Kirsten dotted down in the 34th minute and Joe Simmonds improved it to claim the bonus point to make the scoreline 29-3 at the end of the first half.

Exeter extended the momentum into the second half with Sam Simmonds scoring his second within seconds of restart and they went on to score the sixth try through Elvis Taione in the 51st minute.

Even though, Bath pulled back things a bit with tries from Zach Mercer (48'), Max Wright (55') and Ruaridh McConnochie (64') as the scoreline became 43-20. However, there was no respite whatsoever for Stuart Hooper's side as a second from Woodburn (71') and Jack Maunder (76') ensured Exeter dominated the encounter with a 37-point victory.