Martin Johnson to present The Rhino Trophy at the Varsity March 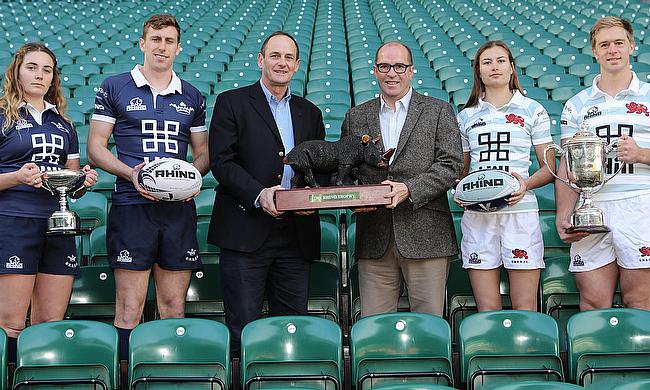 World Cup winning former England captain Martin Johnson will hand over The Rhino Trophy during The Varsity Match next month when Oxford University and Cambridge University lock horns with each other.

Already the official teamwear, match ball, equipment and mouthwear supplier to the prestigious fixtures, it’s fitting that one of the world’s fastest growing rugby brands will now also be awarding a unique trophy to the victorious side in both the men’s and women’s fixtures.

“I’m delighted and honoured to be presenting The Rhino Trophy to the winning teams on Varsity Match day. The fixture still retains its iconic status in the professional era, and we look forward to continue to support it in the years ahead," said Johnson, who is also a Rhino shareholder.

Reg Clark, CEO of Rhino added: “Rhino has been an official supplier to the last three British & Irish Lions tours, and to England, Wales and many other leading national sides for many years, but as a former Oxford Blue this partnership means as much to me as all of those. Seeing Johnno present The Rhino Trophy on Thursday 7th December will be a real personal highlight.”

The Varsity Match Company CEO David Searle, said: “We are both delighted to extend our partnership with Rhino and honoured to welcome back Martin Johnson to Twickenham to present The Rhino Trophy to the victorious teams.”

The winner of Rhino’s Prop Star competition is also set be announced at Twickenham with Martin Johnson presenting the award on the hallowed turf between the women’s and men’s matches.

Over the past year, the search has been on for the British prop who has gone above and beyond to support grassroots rugby and the community. After more than 40 props were nominated by clubs in England, Wales and Scotland, an expert panel of England legends Jason Leonard and Rochelle Clark and Welsh icon Adam Jones selected a shortlist of three that have gone to a public vote.

The 31st Women’s Varsity Match and 136th Men’s Varsity Match between Oxford and Cambridge Universities returns to Twickenham Stadium on Thursday 7th December, with tickets on sale now from £25 adults and £15 students at www.thevarsitymatch.com.