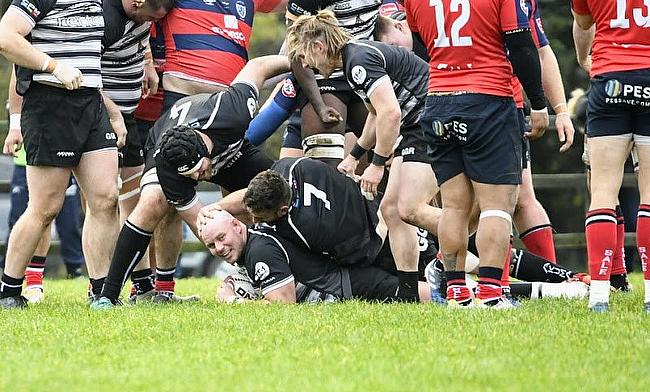 Exclusive: Ricky Khan discusses London Scottish and being the only BAME coach in the Championship
Carl Kirwan on leaving Chinnor and stepping back into the Championship
Toby Freeman on a year in the top-flight and the Championship 'grind'
Chinnor Director of Rugby Richard Thorpe: 'This was a perfect opportunity for me'

It was just over a year ago that Nick Selway was arriving at Chinnor but now, the former Jersey man is returning to the Championship with London Scottish.

In his formative years as a player, Selway started off life with Lydney RFC before joining Cinderford and then Jersey for six seasons. A former bricklayer, now a site manager, he moves to a London Scottish side transitioning to life as a semi-professional outfit and having experienced that enviornment himself at Chinnor in National One, the front-row says it can be challenging being a part-time player.

“I don’t think boys quite realise how tough it is,” Selway said. “When you are working every day and having to get to training for six o’clock for a gym session or do some extras before you train, then off the pitch at half nine, it is tough. For a lot of people, you aren’t getting home until 11, half 11. Then, for myself, the next morning I was back up at six o’clock to travel to work.

“It is a lot of commitment and people don’t realise it. They just think it is a bit easier. You are balancing rugby and work and people think that because you are not training full-time, it’s a little easier. It’s not. It is quite tough going. The only day we really had off was Sunday’s, because on Friday we used to travel. It is quite demanding on your body.”

Selway is not the only former Chinnor man to have been recruited by coach Matt Williams to play for London Scottish. As some of you may have seen this week on Talking Rugby Union, backs coach Ricky Khan has joined the club, whilst prop Joe Rees and fly-half Laurence May are also making the trip down the M40.

Members of the Tuilagi family will also be wearing blue next season with Brian and Fred joining from Mogliano Rugby and Rugby Colorno, respectively. Scottish are also bringing back a cast of familiar faces, with Ed Hoadley, Bobby Beattie, Luke Frost, Harry Sheppard and 41-year-old number eight Mark Bright signing on for another year.

??????????????After being announced as London Scottish's backs coach earlier this month, TRU spoke to Ricky Khan about his new role.

Arriving alongside Matt Williams, Khan also discusses being the only BAME coach in the Championship??https://t.co/TPULgwPrl1 pic.twitter.com/M5djpZLOER

One of the biggest sticking points for Selway in joining the side was whether the commitment would affect his day job. Looking to secure his long-term future, it would have been detrimental for the hooker to start upping his rugby commitments.

“It’s a tough one because I have been at a club like Jersey and you see a lot of boys not on great money going through what they go through and the thing is, injury can hit anybody at any time in their career,” Selway said. “When you are not on fantastic money, when you get injured, you struggle. A lot of them come straight out of academies and they have got no qualifications.

“There is two ways of looking at it (semi-professional rugby in the Championship). One way is, this is a model where guys can have the best of both worlds, they can still study or work, graduate or do an NVQ like me. On the other hand, you could see the guys that are in full-time rugby and they can now go on to bigger and better things.

“It is a tough one with the cuts and with Covid. At the minute, clubs can’t sustain full-time rugby. But, on the other hand, it attracts players that have been in the Prem and want to do what I do, where you work and play at the same time. It plays into both hands.”

Selway is returning to familiar territory with Scottish. Having been a visiting player on many occasions, the former tighthead is now calling the Athletic Ground home for a season before the club relocates.

As things stand, there is no starting date for the Championship. This is largely due to Saracens’ commitments in the Premiership which is set to resume in two weeks time, leaving the majority of second tiers sides and promoted Newcastle Falcons in limbo about when they can start preparing for fixtures.

Regardless, Selway is hungry for his return to the second division of English club rugby. It is a new era for him and his teammates, with many anticipating the league to be an interesting mixture of professional and semi-professional sides.

“They want to identify as a little bit different over the next couple of years,” Selway said. “Matt has gone with a big pack and when they announced myself and Joe’s signing, you knew Scottish would be playing a different, more upfront, pack dominated game. I think you have to be realistic as well.

“We are not going to say that we are going to win the league. I think, every week, as long as we are improving and pushing each other, there will always be that drive, and you can tell that in who Matt has signed; players that want to progress and still do a day job. If anybody has signed there and wants to earn a bit of money, they are probably in the wrong league.”