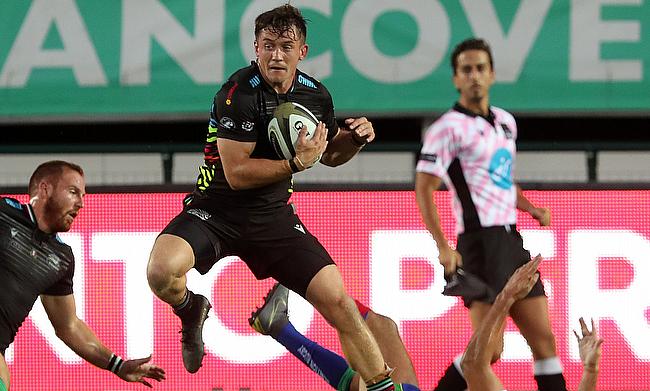 Six Nations 2021: Could there be an opening weekend upset?
Bernard Laporte confident Six Nations will happen without disruption
France wants safety assurances from England and Ireland for Six Nations
Quick Guide to the Six Nations Championship

Joining Zebre in October 2018, Jamie Elliott has settled in well to life in Parma.

Having made over 150 appearances for Northampton Saints in all competitions and scoring 24 tries in the Premiership, he made a pit-stop at Bedford Blues in the Championship before a Facebook message from a former England U20 teammate prompted Elliott's move to the north of Italy.

“Dave Sisi messaged me on Facebook and asked if I had ever thought about playing in Italy,” Elliott told TRU. “My agent then got involved and the next week I was out here with the team, trying to learn the calls, the language and then playing Cardiff away on the bench.

“I say that in that first six months is when you truly settle into the Italian lifestyle. It was a transition. I wouldn’t say it flowed like a river, it took its time, but everyone was very accommodating.”

Becoming a regular in the Zebre side across his first two seasons with the club, so far this year, Elliott has been frustrated by injury which has restricted him to just three appearances.

Taking part in Conference A of the PRO14, Zebre currently sit bottom of the pool of six on 13 points, just one adrift of Dragons ahead of their clash with Edinburgh this weekend.

Another game in #Parma for Zebre #Rugby?? who will host @EdinburghRugby?? for the #GuinnessPRO14 Rd. 11

With the Six Nations quickly approaching, Zebre will soon be without their Italian stars. They are set to lose the likes of Danilo Fischetti, Luca Bigi, Dave Sisi, Marcello Violi and Carlo Canna as well as potentially even more key performers to Franco Smith’s squad as the Italians look to avoid a sixth consecutive wooden spoon in the championships.

“We struggle a bit in those times,” Elliott said. “We lose like a whole squad and especially if we get a few injuries as well, then we are really struggling. Here, it’s not like the Premiership because all of the young guys play in the Eccellenza (Top10), which is the Italian league where they get loads of game time.

“But you are bringing in these young guys and it is a great experience for them, and everyone wants to impress.

“With the lack of relegation, there is, of course, still emphasis on winning games, but there is more space for development. When the internationals come around, both of the Italian sides, we lose most of our players.

“One year we had 13 of our players just go and there is no other option than to play the younger guys and the opportunity is there for them to get stuck in and to get involved and learn their trade. It’s sink or swim.”

Finishing above Ospreys last season in their Conference, the start of the 2020/21 campaign has actually been a good one for Michael Bradley’s team despite their current league position.

Winning their last two PRO14 fixtures and remaining unbeaten in the Challenge Cup with a draw against Bayonne and victory against Brive, the Italians haven't tasted a defeat for the past six weeks.

Having been able to build momentum since December, Elliott believes that the team have improved year on year and he feels Zebre are currently repeating the form which they experienced 12 months ago.

“The thing is, we improve every year and once we are all singing from the same hymn sheet, we are a side that is hard to stop and hard to contain,” Elliott said. “Sometimes it is trying to be all on the same hymn sheet that is the problem, and we are picking up points and gradually gaining momentum.

“It is almost like last year. We were in a similar position, picking up momentum and then Covid-19 came around and put a halt to that, but it was around the New Year that we got into the swing of things.

“I think this is like a true test for us now. This is another step up from the European games, then we played the two Treviso games and we are in this now and it is a true test. As we all know, they [Edinburgh] are a hard team and there are no slouches at all and they will come firing, no doubt, and we have to match that. We have to match that.”

Edinburgh have been making waves in recent weeks. Fans would have been frustrated to see reigning PRO14 Player of the Year Duhan van der Merwe leaving Murrayfield, but delighted with the names that have pledged their allegiance to Richard Cockerill and the city for years to come.

Jamie Ritchie, Hamish Watson and Blair Kinghorn have all recommitted to the team, with Harlequins’ James Lang and Glen Young moving north of the border in order to further their Scotland ambitions.

One of two PRO14 games this weekend, with Scarlets hosting Cardiff Blues on Friday night, plenty of eyes will be on the Stadio Sergio Lanfranchi. With European fixtures cancelled, Elliott is more than aware of the spotlight on the competition and he hopes his side can add another four or five points to the collection.

“I suppose it’s like a final of some sort,” Elliott said. “Plenty of eyes will be watching because as we know, sport is key in a lot of people’s lives. We found that out after the breakout of Covid. I was talking to my brother and he was like ‘there is no sport, what are we going to do?’.

“I had to say to Chris that we would be alright and not to worry. So, we are putting on a show, but the main thing is getting a win.”